On June 25 & 26 we hosted our second clinic at our farm with Jessica Kerschbaumer. Unfortunately due to Sierra getting bred and crappy weather, we only got to ride a handful of times between clinics, but never the less we geared up for another great weekend of learning!  We usually host our clinics as weather-pending, in the event that we may get rained out... never did we expect to nearly have to cancel due to extreme heat.  The entirety of Western Canada is basically stuck in a bubble being pumped full of hot air, and as the mercury threatens to hit 40 degrees Celsius or more (104F), we are essentially melting.

Instead of cancelling the clinic, we revamped the schedule to avoid the hottest portions of the weekend, while keeping a cooler center-ring stocked full of cool drinks for everyone, and the barn hose basically ran steady keeping horses cool.

Due to changing the schedule, we did a half day on Friday and Sunday, and a full day on Saturday.  I chose to only ride Friday and Saturday so that we could wrap up a little earlier on Sunday, which was scheduled to be the hottest day of the weekend.

For my first lesson, we picked up where we left off from the last clinic, and dug back into the exercises to continue connecting Sierra to the left rein and loosening her lower back and pelvis through more lateral articulations.  I had previously told Jess that I recognized where I went wrong with Sierra's canter in the past, so besides leaving it alone for the majority of our rides this year the only work in the Canter I have done has just been to go forward on a looser rein large around the arena.  I've primarily ridden them in a half seat or two-point to avoid adding any influence from my seat - right now our only goal has been to find an appropriate stride and develop some relaxation in it... eventually. 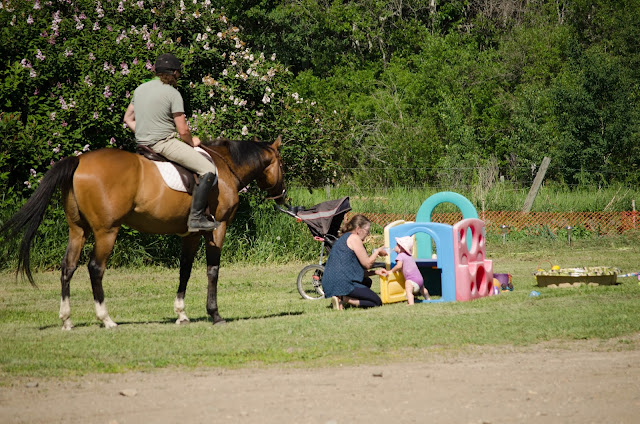 My hubby was overseeing our little play with Grandma while he waited for his lesson. 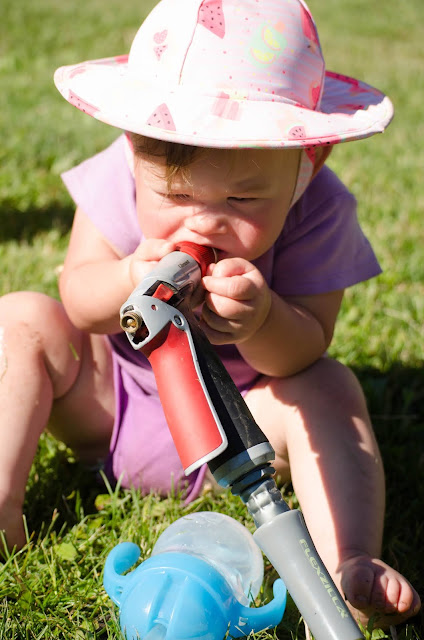 Baby had the right idea
Unfortunately no one was even there for my first lesson, so I have no media but Sierra felt rather tight in the back and 'blah' so we jumped right into some leg yields and figure 8's where we rode a 15m in true bend, and a 5m in counter bend leg-yield type figure.  Just like the weekend prior, we didn't worry about anything besides the crossing-action and reaction to my outside aids.  Sierra is quite dull to my left aids, and I find them harder to use in general, so doing the counter bent circle on the right rein is the ultimate struggle bus, but it's also an excellent exercise for us because we lose our track of the circle other wise.  In not asking anything beyond moving off my outside aids, it helps remove some of the pressure of it "looking good" while we just go back to the basics of responding to an otherwise basic aid.  Given how much I love to drag Sierra around on the right rein like a motorcycle, and she loves to pop her shoulders left, it's an excellent and basic exercise that can be done easily and gives us great results.
Following the trot work, we ended with me showing Jess the canter situation - we primarily worked on us going large in a half seat, and turning off my outside aids, just like in trot.  By then, Sierra was quite tired so we just did a few circles each way, and decided to spend a little more work in the Canter the next day. 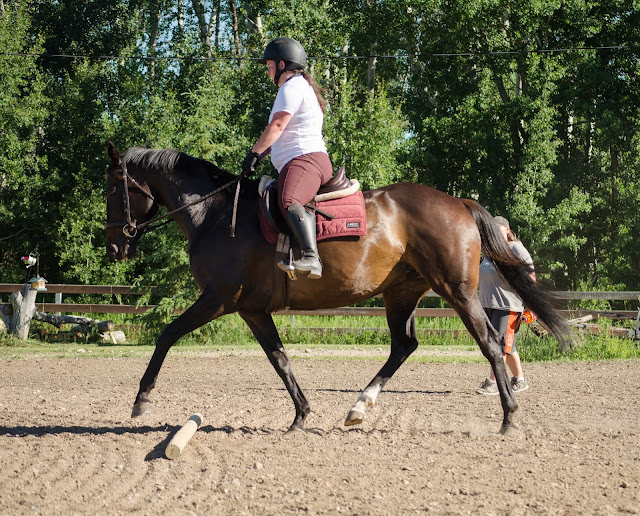 On Saturday, we decided I would ride in my jump tack as I'd like to get back to jumping but after Sierra came back from she-who-shall-not-be-named, it's a complete cluster f&ck sometimes to even ride past a standard some days so we decided to just approach it moment by moment.  Unfortunately from the second I started tacking up, I knew it was going to be one of those rides, and my hopes of jumping was slowly creeping further and further in the distance.. but regardless, I have been working really hard on developing relaxation and as much as I would love to jump, I know nailing out these basics are crucial to our future and therefore some days we have to just keep on trucking, even if it means we have to take a different path than originally planned.
We started our lesson off similar to the day before; a little bit of leg yield and our figure 8's.  We did some raised poles in a 5 stride line, and as Sierra wants to rush forward with tension to the next fence, we trotted one, then leg yielded around the second.  To begin, Sierra was like "well this is absolute horse sh!t", but eventually she started to realize that I was the pilot and complied.  Once we finished all that, we moved onto cantering a pole on a circle.  Canter in itself tends to make Sierra really hot, as does frequent transitions and as a result, we quickly had to adjust our plans for the remainder of the lesson to accomplish the goal.  While it was supposed to be an easy-peasy thing, Sierra had other plans and it quickly was bordering a yard sale so we changed the plan.  While the plan was just to casually canter a pole, the idea of it frazzled Sierra's little brain squirrels and it became a thing.  The exercise then transformed to trotting the pole, and cantering after. We started with just cantering a few strides then breaking to trot for the pole, and then each time cantering a little further before breaking back to trot. Eventually, we were able to canter the pole on the left rein without it being disasterous, but we never reached that point on the right rein.  We did the right rein last, so by then she was pretty anxious, and our steering that direction is questionable in itself so I'm not terribly surprised it didn't come together. 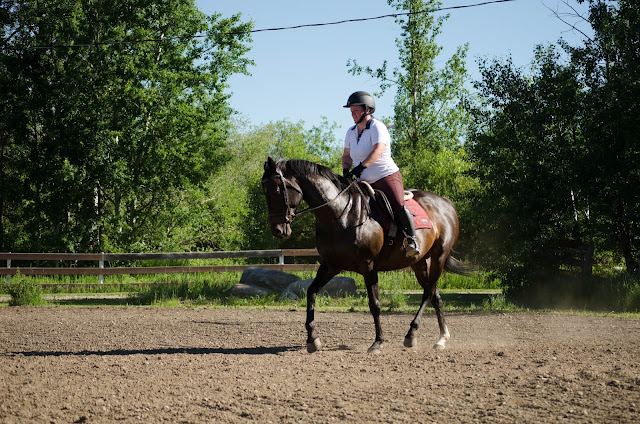 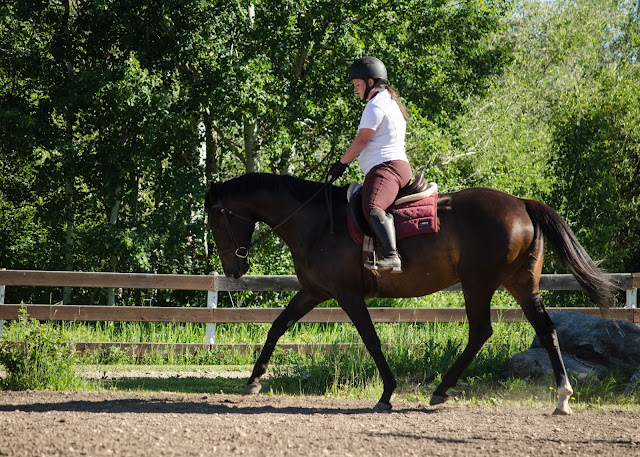 Overall, I don't love how the clinic ended for me, but it still gave me more tools and exercises to work on, which is what I feel like I need right now because I find myself riding in endless loops of large, circles and serpentines.  I will admit, the canter pole situation became a little frustrating for me as I had a mental dilemma - on one hand, I know I need to buck up and ride through that "sticky shit", but on the other, I wasn't sure if it was the right decision for Sierra. I've worked so hard to develop relaxation and it's been my #1 focus in every exercise, above anything else.  In this situation, there was absolutely zero relaxation, and it felt as though carrying on in that moment was only adding fuel to the fire beneath me.  Against Jess' wishes, I took a walk break to gather myself, then we picked it back up and were able to accomplish the exercise.  Our next clinic isn't until the end of August now, so we have lots of time to iron things out and hopefully be in a better place. 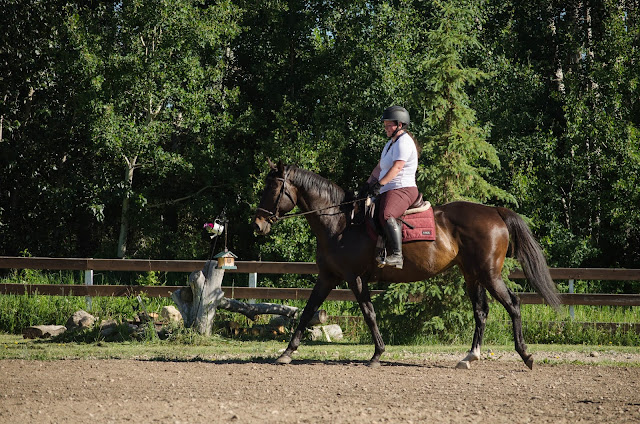 Overall, the weekend in itself was great and I'm a little sad that we now have to wait about 2 months for our next lessons, but that's okay.  Sierra is due for about 2 weeks off right now, which coincides well with this extreme weather - none of us are accustomed or set up for this type of heat, so I think we will both enjoy a little break regardless! 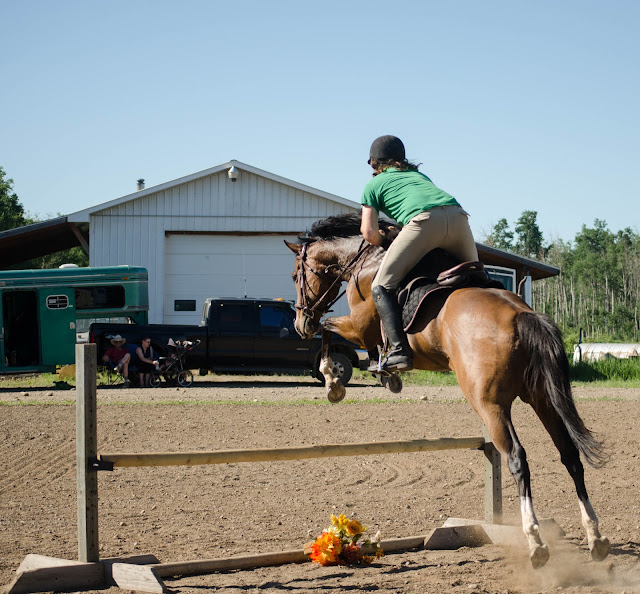 Cute pics of my husband, just cause. 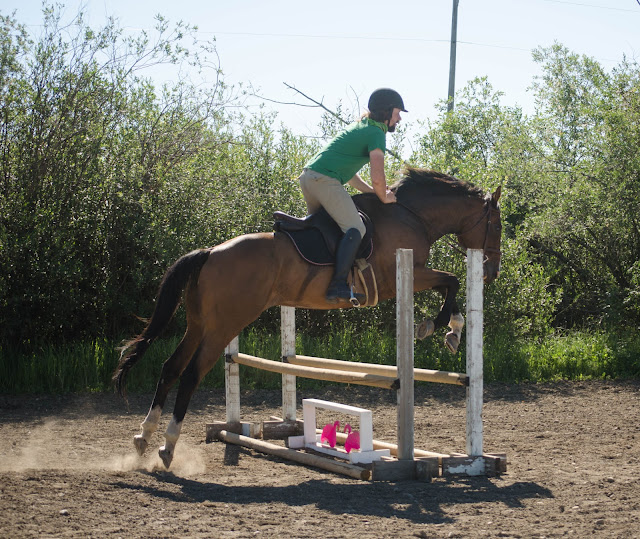