Disclaimer: If you love a good ol' fashion Media Dump and don't mind a drawn-out process of ups and downs, this saga will be for you.

We purchased our farm nearly 4 years ago now, and throughout these past 4 years we have waffled on what to do with our barn.  While we are grateful to have a barn regardless, it's a very odd size with questionable construction throughout a good portion of it.  As a result, we have never used it for more than cross ties, tack storage, feed and water and it has acted as a glorified litter box for our barn cats.

The original portion of the barn was built in the mid 80's, and features a very basic (and iffy) construction.  There is a small insulated room which houses an insulated box where the water pump resides, and we keep our tack and feed in there as well.  Over the years, we have made it our own but with boarders it is very cramped.  As a result, across from this room there is an open area and we store excess feed and other items such as Boots and Saddle Pads there.  This area was once a single stall and milk stanchion for the old owners milk cow.  In the old milk stanchion, we store our barn garbage such as feed bags, twine, etc for burning and/or dump runs.

In the mid 2000's, the previous owner decided to hire a carpenter to build a large addition, which makes up the bulk of the barn now.  He added three additional sliding doors, two draft-size standing stalls, and a 24 x 26 open space where he created stalls out of panels, and a weird floating chicken coop.  Before we bought the farm, he removed the panels and paid a crew to clean it out (thank goodness, because the first time we looked at it there was literally 2 feet of of built up manure in it)  They didn't get it right down to the clay base, but i'll take what I can get.  He used the barn for foaling out his draft mares, and harnessing them up.  We utilized the weird chicken coop for some time before we built our new coop last summer, and I could not wait to tear that eye sore down which we did last fall.  Maybe if it's floor wasn't right at face-level for me, I would have liked it more but it was just too odd for my liking, not to mention nearly impossible for me to clean. 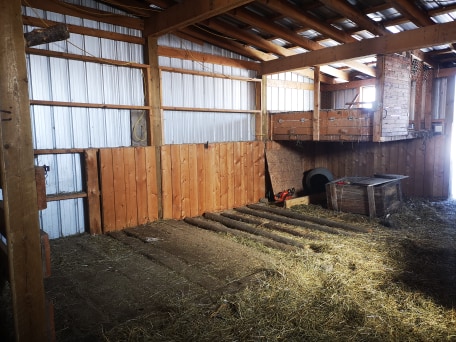 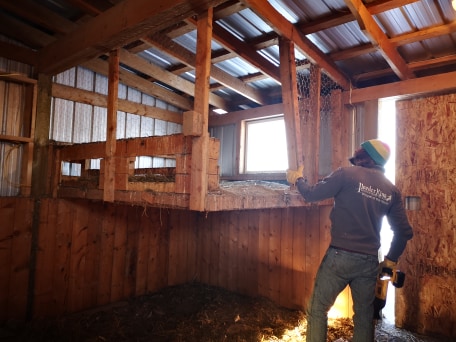 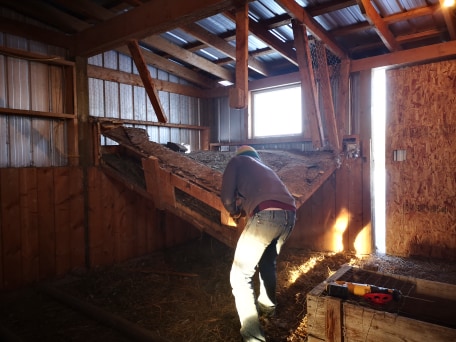 The floor is about 75% railroad ties on top of clay.  Once the previous owner laid the railroad ties, he poured sand over it to fill the cracks and stabilize the ties.  As you can imagine, after years of sweeping the majority of said sand is no longer visible, but the ties settled well and are very, very stable underfoot albeit imperfect to look at.  The original area of the barn and all 4 doors are insulated, but the newer addition is not.  Some areas had kick boards, but most do not. One area of the exterior tin wall is crumpled and bent and I can only imagine he had a horse put a foot through it. He was an old rough n' tough cowboy type and I imagine they had a lot of accidents on the farm * insert judgey eyes *.

Due to the odd size of, well, everything, I was really reluctant to invest a lot of work (read: money) into this structure, but after much deliberation (literally, years), we decided to go for it.  Financially, it's not in our budget to do the massive amount of of work to adjust the size of the barn itself, and we do not want less than 4 stalls that can be converted into 2.  Besides the odd ground dimensions, the lowest portion of the ceiling is only 8ft at the front wall, but it slopes upward rather quickly to a peak of 14 feet.   The stalls themselves will have to be 9ft x 12ft and the dividing wall will be hinged to fold back against the back wall to convert two stalls into one measuring 9ft x 24ft.  Once finished, we will have two stalls on each side with an 8ft alleyway in between. I did some research and asking around online, and it seems as though there are worse things than stalls that are 9x12, and while an 8ft rafter is far from ideal, that is at the top of an end wall and chances of a horse smacking their head there is slim to none.  The intention is to lay mats over the railroad ties, but first we need to source more and they are apparently illegal to buy due to being potentially cancerous due to their coating.  Why are the best things in life always illegal?!

With the price of lumber on the rise and my hubbies knack for being a wanna-be carpenter with a flair for traditionalism, we intend to include a fair bit of de-barked logs and timbers from our own property into the building of the stalls, though roughly 75% of it will be 'store bought' products.  They will feature dutch doors that can be fully locked up or have the top drop down, and the 'bars' will be made of willow, but otherwise will be fairly standard stalls.  Realistically, we wont be stalling regularly but I do hope to use them for foaling out and the first few weeks of babies lives, as well as injuries, and so on.

I previously mentioned two draft size standing stalls - one was mostly slatted in with rough cut 3x10 lumber, and the other was just two large timber logs. Both featured hay mangers and a hole in a piece of wood which he tied them through for the night.  We have decided to convert one of the standing stalls into just a storage area for square bales, shavings, wheel barrow, etc, and the remaining stall will be converted into a stock.  I know a lot of people use standing stalls and love them, but I've personally always been terrified a horse would try to lay down and end up getting themselves into trouble, and they're just ultimately not what I want BUT they will conveniently be repurposed to suit our needs.

The standing stall that is being converted will have an entirely removable kickplate attached, an adjustable chest plate, as well as a steel bar installed between the two big 6x6 timbers that are both structural and act as posts to hold the sides of the standing stall up.  This steel bar will allow us to back horses into the stock and hoist their heads up for dental work, and I could use it to lift tails for reproductive work as well.

Before we begin anything, we have a lot of clean-up to do.  Last year I was basically useless because I was heavily pregnant and the majority of the farm work fell onto my husbands shoulders. I normally keep the barn fairly spotless, a polished turd if you will.. but keeping things clean and tidy was far from the top of Ray's priority list while I was slacking on my farm chores as I grew a human.  In addition to that, we also had broiler chickens living in a makeshift panel stall as well as an injured horse who needed a few days of stall rest and closer monitoring.  While it was cleaned out, there was still some remnants of bedding, hay and poop left behind... plus, my herd of barn cats love to poop all over the barn as repayment for keeping the mice at bay.

Last week we began the major clean-up; we still have to do a dump run and sort through the 'extra storage' area from across the tackroom, as well as a few odds and ends that currently do not have a home because we will be using them for other renos.  Stay tuned for more updates as we turn this incomplete building into something fantastic! 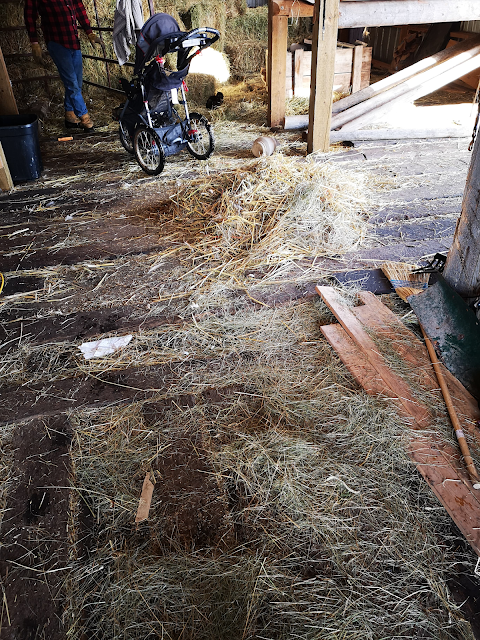 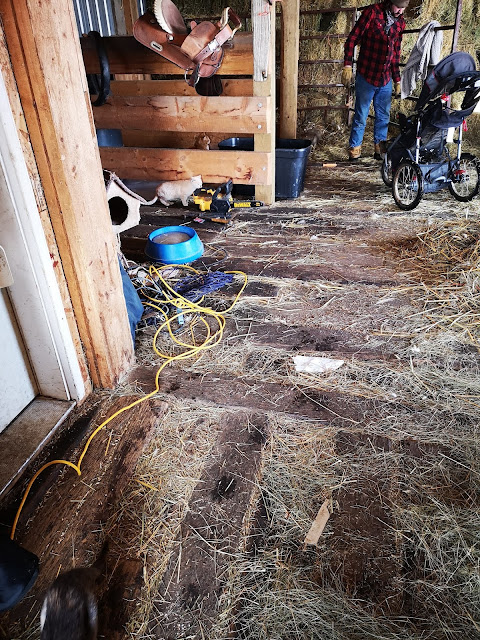 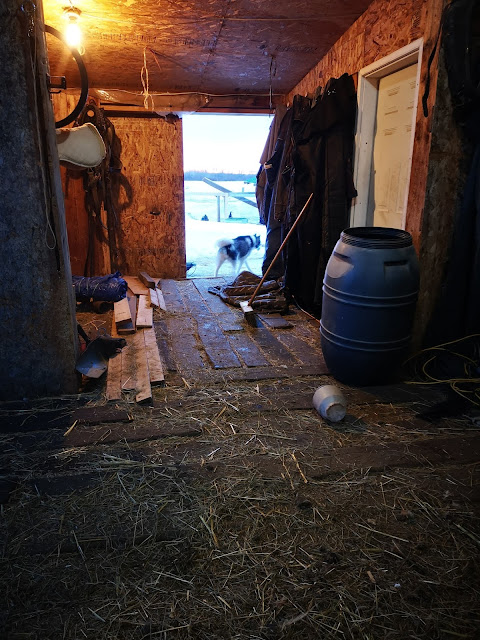 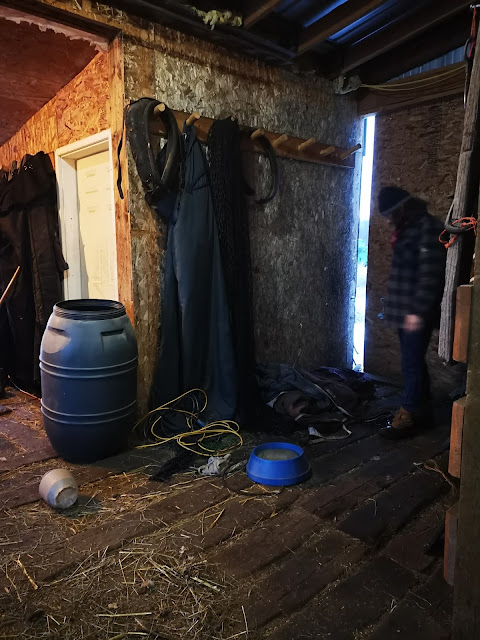 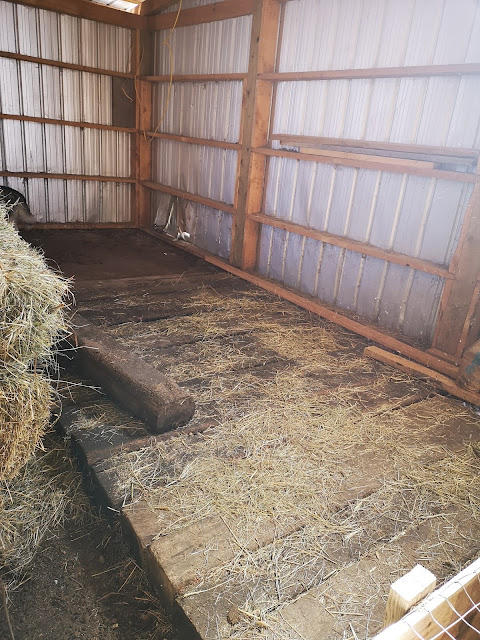 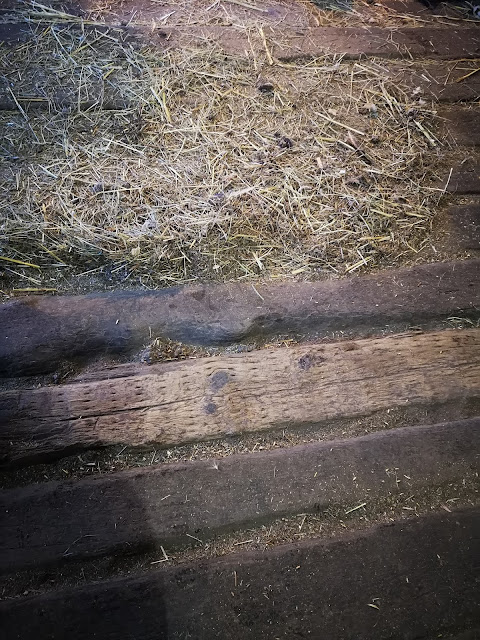 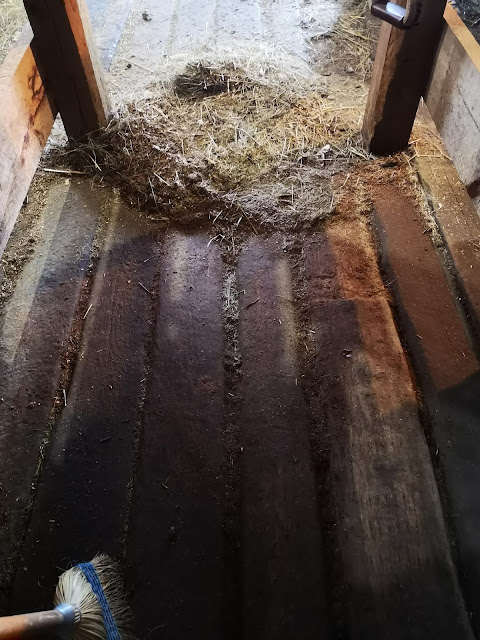 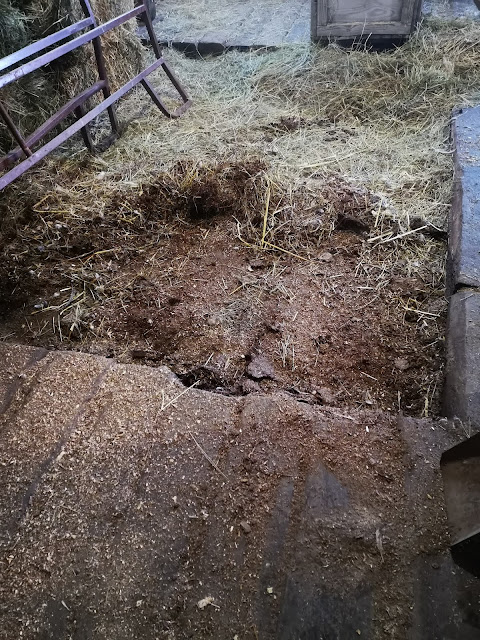 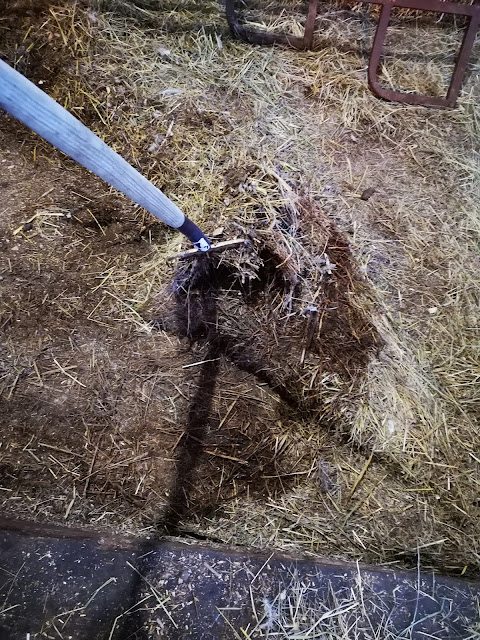 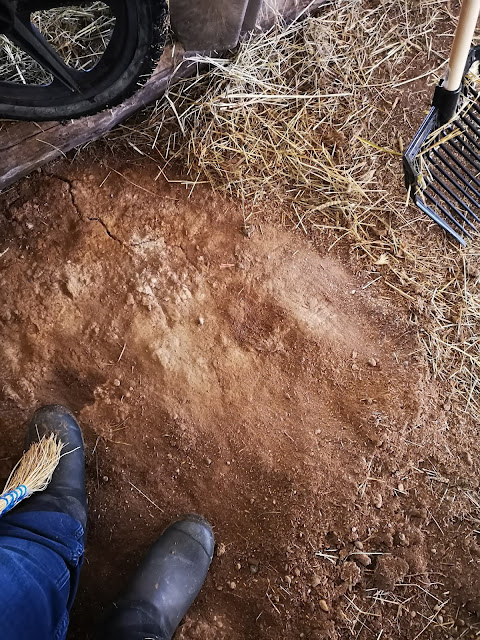 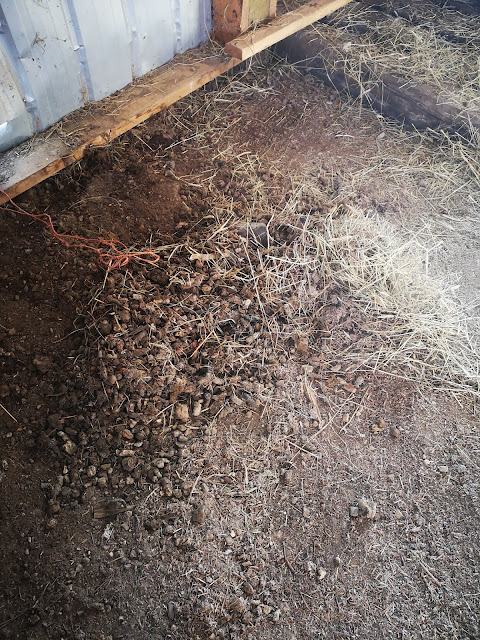 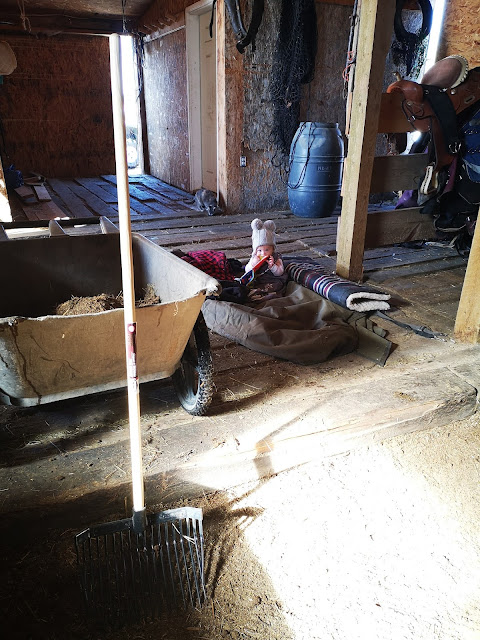 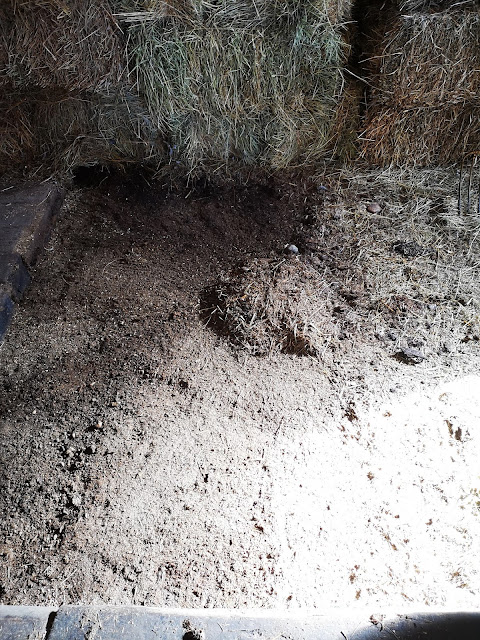 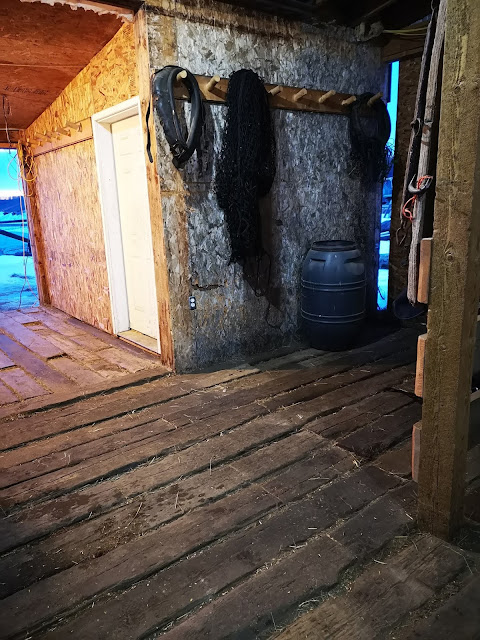 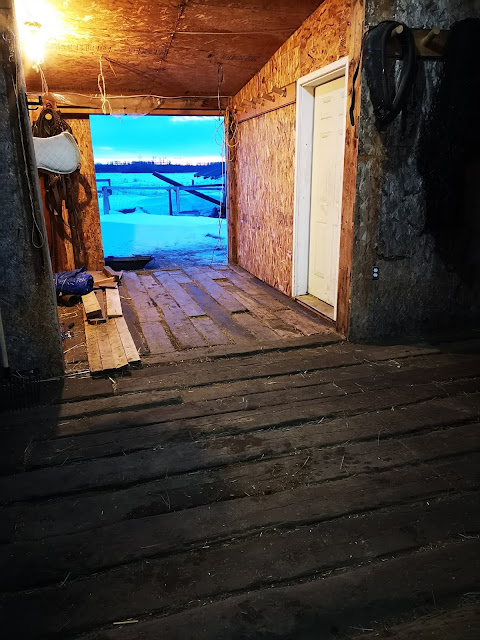 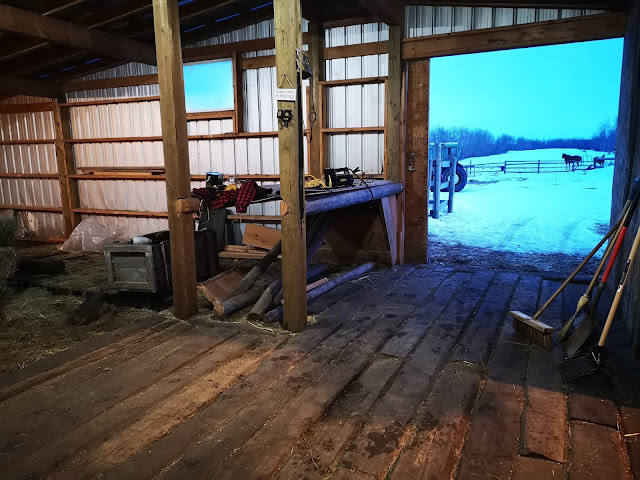 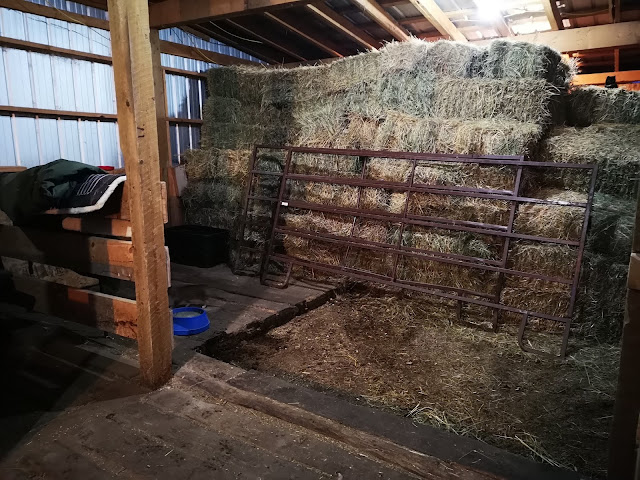 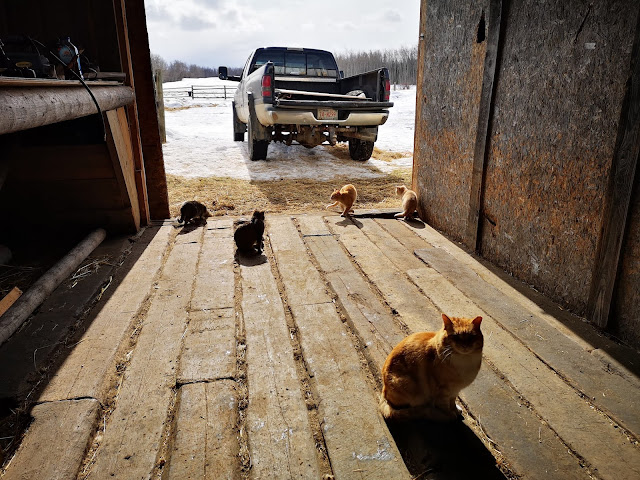 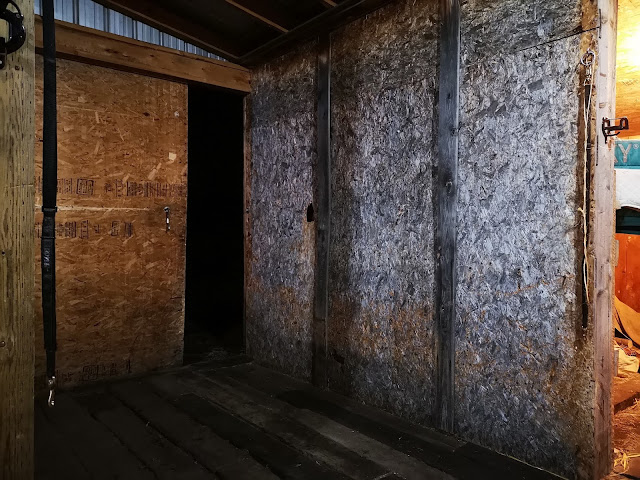 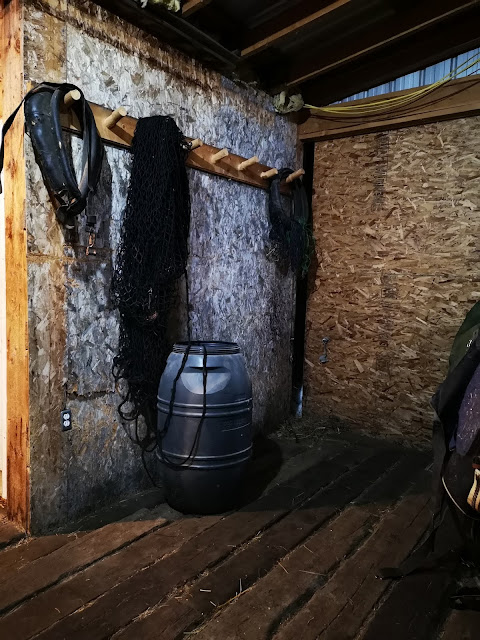 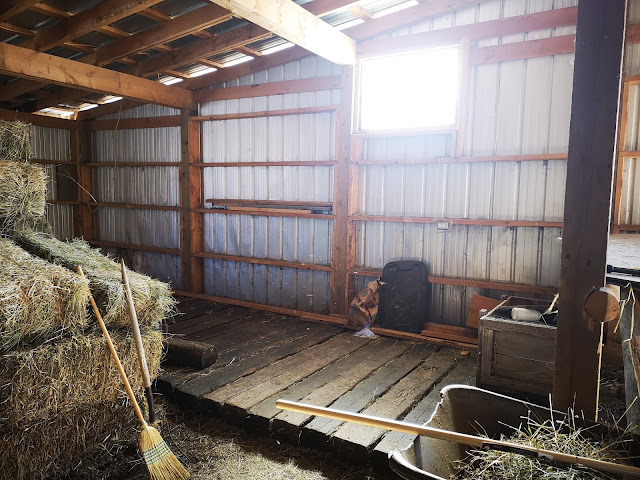 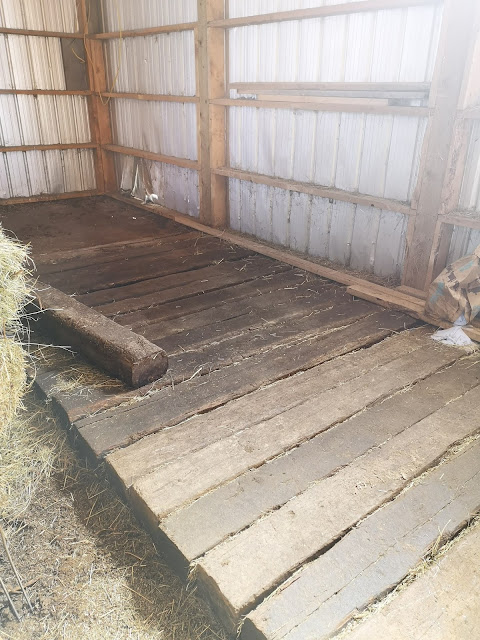 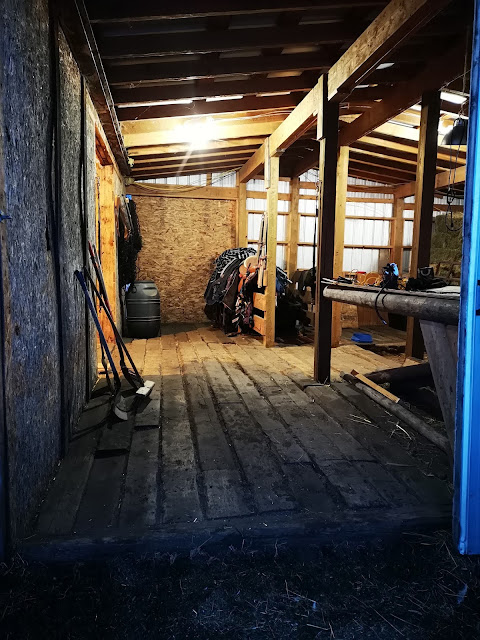 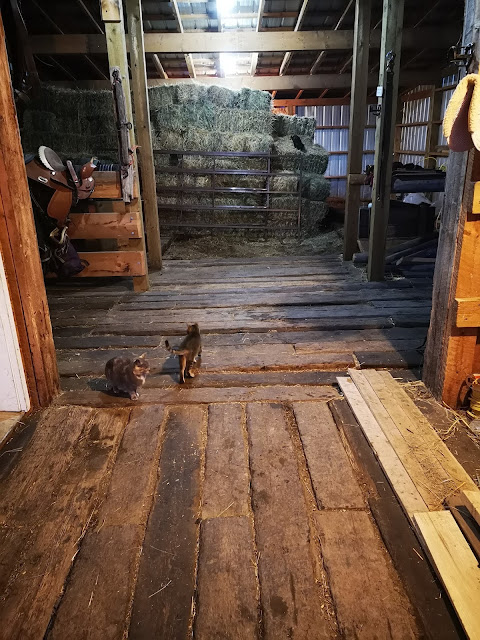 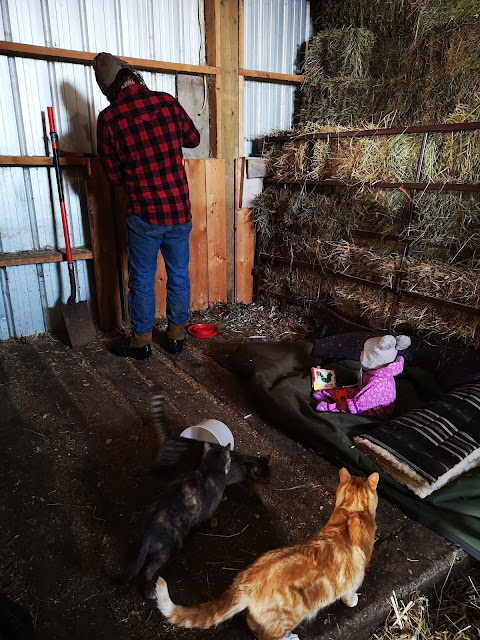