A Totally Unexpected Twist of Fate

February 13, 2017
Have I mentioned i'm terrible at this blogging thing?  Ok maybe I should give myself more credit because lets be honest, there is literally nothing happening in my life to warrant writing about.  In recent weeks I have been focusing on going to the gym, eating healthier, and staying positive in a currently disappointing time in my life (adult stuff, it's really not pertinent information).  I have totally abandoned ship on 2 of the 3 things for the past week because well, um... I'm lazy and unmotivated.. but i'm getting back at it today because I can feel myself spiraling downward.  As much as going to the gym 'sucks', its for multiple good causes and I develop a sense of accomplishment and success after each session.

Ironically, this feeling of success has become directly related to my confidence, or lack there of.  Much to my surprise, I have done things recently around horses that has me like "You go Glen Coco, you just did that without even thinking about it! One gold star!", and suddenly I'm feeling myself grow in leaps and bounds.  Watch out, at this rate I might actually do a post about something CRAZY that I decided to do on a whim!  A totally unexpected twist of fate.
Of all the non-exciting things that aren't worth posting about, I've dug deep inside my treasure trove of garbage and decided to post a little about my recent feelings and adventures with Kai.  As per usual, I have gone through the entire cycle of "what the hell was I thinking", and I have emerged on the other side totally in love.  While I know this isn't the end of our trials and tribulations and I will probably feel like I made a grave error at least 100 more times, but I feel like my newfound confidence has improved our relationship tenfold.  I have been noticing an increased attitude from the cranky little lady, and did some posting of online areas that I frequent looking for advice, suggestions or discount codes on bulk wine.  Expecting the usual suggestions of feed, ulcers, tumors, reproductive tract pain, heat cycles, age, time of year and the good ol 'sorry, your horse is just a bitch' response, and I got exactly all of the above and came out no further ahead.

Early on, I would punish Kai for her attitude, which primarily rears its ugly head during 'boring' things such as blanketing and unblanketing (which has been an unusually common occurrence over the past 2 months), which I often do without a halter or tying her up.  Having found no improvement in my oh-so abusive treatment plan for Cranky Mare Syndrome, I have chosen to ignore it when she gives me sass - when she swings her head at me she gets a growl which usually has her sulking in general annoyance, but at least a lessened negative reaction.

To be fair, her attitude has never stemmed beyond pinned ears and the occasional "I SWING MY HEAD AT YOU IN DISAPPROVAL".  She has never chosen to act out by kicking, or even threatening to kick, biting, etc.  She has nipped me once but it was when the Chiropractor adjusted her severely twisted Sacrum as I wasn't strong enough to do it myself... and while she got a 'hey!' out of me, it was a natural reaction more than anything malicious. Plus, she's just as quick to pop her adorable ears forward and say "what did I do wrong mommy?! i'm a cute baby!" and carry on like it didn't happen. 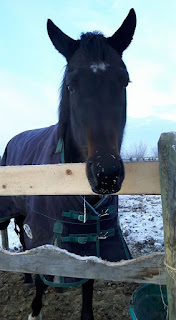 Since proceeding with the "just ignore it" tactic, she's gotten significantly less aggressive in her personality, and instead just takes on an overall look of displeasure because I'm not feeding into her mareish ways.. So while I don't want to count my chickens before they hatch, I think ignoring all my problems working? Ha.  If it were Kidd, he would get a smack and told to knock it off, but Thoroughbreds - never mind Thoroughbred Mares - are different kinds of creatures, to put it politely.  I'll never forget one of our first days together and I smacked Kai on the chest for pawing while grooming her, and she buried her head in the corner of stall like I had just unleashed the strength of God himself on her bless-ed chest and there was absolutely no way she could go on in this life..... Mares!

It's melting like crazy again here, and Kai has been enjoying the mud and the muck blanket-free during the day.  Yesterday I tossed her out on the lunge line for the first time in nearly 3 weeks and I literally had to chase her with a tree branch to keep her trotting.  Today we only walked due to sketchy footing, and I had to do the same to just keep her moving at a respectable speed, one step up from a snails pace.  She's becoming incredibly relaxed and otherwise satisfied in her new life.  She's understanding the lunging thing like an ol' pro, and after her Chiropractor appointment & Kidney Flush, her crazy bucking on the line has ceased.

Regardless of her sassy attitude, i'm totally smitten!  She's so sweet and comes to the fence to say hello and check me for treats as soon as she sees me, while her buddy, Bell, shrugs me off more often than not.  That being said, she did scare me today when she ate my apple core whole without even chewing.  They say that animals resemble their owners..... teehee!