Always Draw Your Own Conclusions

January 06, 2017
I'm heading home to Beautiful BC in March and at the advice of a good friend, I decided to pre-advertise my services for Equine Sports Therapy sessions while i'm there.  I will be honest, I was skeptical and didn't expect much response. I understand people are very particular about who they welcome into their horses lives, and many have professionals they already work with on a semi regular basis.  I can understand, as I too am particular about who I have used in the past to work on my own horses.  Regardless, much to my surprise I have received quite a fair amount of interest in the 24 hours my advertisement has been posted!

One of the potential new clients who contacted me has brought an intriguing case to my attention.  The horse in question has a history of limb problems, particularly in the hind end.  Not only does he suffer from String Halt, his 'stifles also pop out of alignment'.  I was curious if she has had him vetted to get a 'deeper look' (primarily regarding his Stifles) and she had.  My concern lies within the Veterinary diagnosis she received.  It left me feeling confused and torn for the better part of the afternoon on the topic of his stifles.. so that's my focus for this blog post. 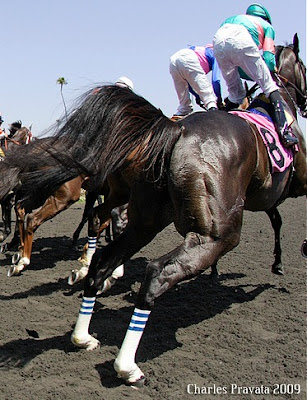 The diagnosis from the Vet was that it's simply due to his breed (Paint) and heavy muscling.  While I won't post photo's for privacy reasons, he is an 'average' type stock horse build... by standard is he excessively heavy.  I'm certainly not a vet by any   means, but this makes no sense to me at all.  That aside, the fact that it's seemingly been passed off as 'normal' is also a little weird to me.  As an Equine Sports Therapist, I have heard of locking patellas, dislocating stifles, etc but I certainly wouldn't consider them a 'common' thing. 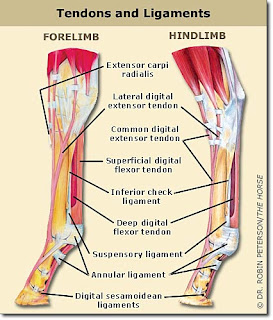 To me and the extent of my knowledge on dislocating stifles or locking patellas, the problems usually persist due to issues within ligaments around the joint.  For a little anatomy background, the Stifle is a complex joint.  There are many ligaments that encompass the stifle joint, and the Patella (Equivalent to the Knee Cap in a human) essentially 'floats' on top and is attached over the joint with the 3 patella ligaments.  In most cases of locked or dislocated stifles, the patella is shifted and the Medial Patella Ligament kind of 'flips' over top of the Femur's Medial Trochlea.  Typically you have to lift the leg up and forward to put the patella back in place. This is often caused by the ligaments not working properly.  Most often, this is a developmental issue but occasionally it can also be caused by an injury.  As you can imagine, over time the ligaments get worn out from all the flipping back and forth.. While ligaments are incredibly hardy, it can be particularly nerve wracking knowing that each time it happens may be the last. 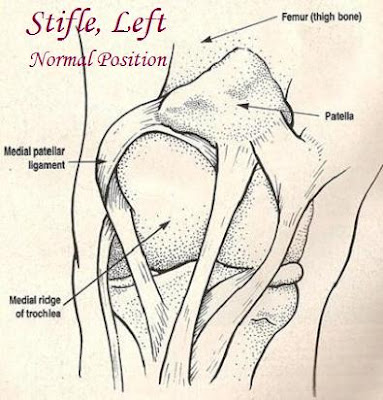 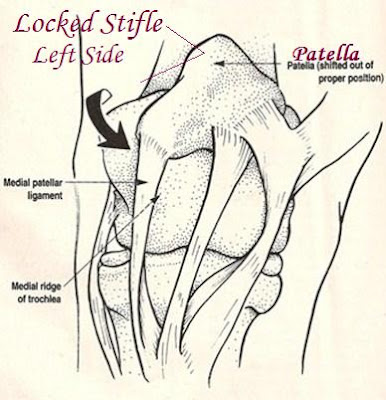 In the event of the horse in question, the fact that it happens on both sides indicates a developmental cause rather than an injury.  The good news is in many cases as such, problems are most common between the ages of 2.5 - 6 when the most growing happens.  When the horse reaches full maturity the problems typically lessen.  The down side to that is waiting without a guarantee of improvement. 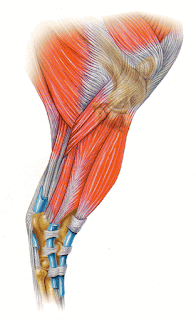 Regardless, i'm still disturbed with the Vet's diagnosis.  I know we're all human and can make mistakes and perhaps the budget didn't allow for further inspection, but it has me curious how often we put our trust in the hands of others and take their word for what it is without stepping back and considering other options. In hindsight, isn't that the truth behind most things in life?  I feel like I can help this horse, but I worry it's something that will only find relief and support while the tape is on.  I will be sure to update my blog with my findings and results but it's incredibly important to remember to always draw your own conclusions and consider alternative thoughts and options before settling on an end result.