November 22, 2016
I realize my blog has been a little lackluster these past few days, but with the onset of Winter and Hunting Season being in full swing, I have hardly had time to play horsey let alone sit down and write about it.  This post is probably going to be random and jumbled, filled with photos that have little to no relation to what i'm actually writing, so bare with me!
Due to stumbling over the frozen, lumpy mud in her pen, Kai presumably scraped the front of her fetlock and subsequently tore the scab off her old injury.  It wasn't dripping in blood or anything, but rather just had a small amount of blood around the area. Hubby and I decided to skip hunting one evening due to the blizzard, so I took her into the barn that evening and brushed her down and poulticed her.  For the first time ever, she was an absolute wingnut in the barn.  She was pawing, kicking, stomping all 4 feet, threatening to set back, whinnying, wouldn't stand still, ringing her tail, and probably anything else you can think of.  Initially I was concerned she was colicing as I had put a straw bale in her paddock for her to lay in if she so chose, and I noticed her nibbling on it earlier... I coddled her and told her it was okay, but after about 5 minutes I just stepped out of the stall and re directed myself to punching some holes in my bridle since it hardly fit her, to see if she would calm down.  Again, back to the self-soothing baby method.  After about 5 minutes of that, she had relaxed and I was able to brush her, pick her feet, etc without incident.  It convinced me she was just being an idiot rather than actually being sick.  Since it was now open, this seemed like a good opportunity to poultice it and see if it will draw anything out.  I poulticed the cut on her fetlock with cold water on Animalintex because I have no hot water in the barn, and took her back out to her paddock for her supper.  I will say, she's put on weight which makes me very happy as I've been sockin' the feed to her.  I think the extra blanketing is helping, as even with the 1 winter blanket and a relatively wooly coat, she still seemed cold underneath at an average of -3C. The last few days has been an average of -17C with the Wind Chill (gross, right?) and the extra blanket has seemed to make all the difference. 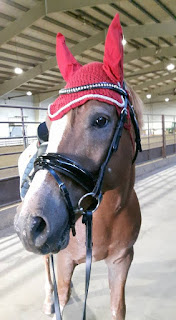 She currently gets about 1 Cup of beet Pulp, 1/2 Grain Scoop of Alfalfa Cubes, 3/4 Grain Scoop of Step 8 Hi Fat, 1 "Pump" of Canpressco Oil (look it up - I swear by it.  Also known as Excel EQ, Canpressco is just made in Canada so I buy it instead) and Magnesium.  On an interesting note, I noticed a huge change in Kidd when I put him on Magnesium this spring, but with Kai I have basically noticed no difference - has me wondering if the BC Lower Mainland is richer in Magnesium than Northern Alberta?  Anyway, food for thought.
Yesterday afternoon I suited up for the ongoing blizzard which brought us about 4" of fresh snow, just enough to fill in most lumps and make the ground a little easier to walk on in Kai's pen.  I went out and removed her poultice and replaced it, this time with a poultice made with hot water.  To be completely honest, it was bitterly cold and I didn't thoroughly inspect the wound. It seemed much more open and was pink with some yellow tissue.  The poultice I removed was a little discoloured, so I knew it was doing its job.  Between you and I, dear Internet, I do feel that perhaps it wasn't treated how I would have treated it myself, but each to their own and it obviously was on the right track to healing relatively fine.  Who knows, perhaps all the mud we dealt with upon her arrival just loosened the scab enough rather than there being an underlying infection or what have you.
I've been hoping and praying for the past 4 days to have decent weather to ground drive her in.  I know, i'm a baby... but hey, at least I bought Winter Breeches - this is a start!  Due to Hunting and poor weather, I haven't had a chance to but I am hoping that this coating of snow improves my arena footing.  I am alone in the office at work today so it's a 50/50 chance if I will be able to sneak out and do anything with her today, but it's only 10;45 so I will continue crossing my fingers and toes.


Christmas is right around the corner, and it makes me so sad.  If you know me, you know that Christmas is my favorite time of year.  My mom was single for the majority of my childhood, and dating/re-married as I approached my teens but regardless she always worked incredibly hard to make the holidays such a magical time of year for myself and my older brother, as well as my younger brother once he was born (he's more than 10 years younger than me).  Each year, Ray and I alternate where we spend our Christmas' and this year it is our year to stay in Alberta with his family.  Normally I would be able to suck it up - don't get me wrong, I absolutely love his family but their Christmas is extremely different than what I am used to, and what I look forward to each year.  That being said, my little brother is spending Christmas with his father in the BC Interior, and this is my mom's first year without kids in the house.  I had a grand vision of having our first Christmas in our Cabin this year (yes, we have been building a small home in our spare time), but the hopes and dreams of that happening were crushed when I realized not only is there not enough time, there isn't enough money to get all that done.. so I think that, coupled with knowing my mom would be semi-alone, had me really tore up.  Luckily, my older brother and his family live a mere 5 minute drive from my Mom and they have invited her over for Christmas, as well as her boyfriend is in town.
As for us, Ray really wanted to have a holiday Party in the Cabin, so we set a goal of getting our interior walls and the flooring complete and then at least it will be closer to being complete, and feeling a little more 'homey' when we put a [surely pathetic-looking] tree in the corner of our living room.  All in all, I know it will be good and we have some things planned that will make it more enjoyable for me but it has been weighing heavily on my mind lately.