Another Day with the Queen

November 17, 2016
Unfortunately due to the onset of colder weather which is accompanied by filling our freezers, general farm prep, etc Kai has had a few days to her own devices.  In a way, I don't necessarily think it's a bad thing. I've suffocated her with snuggles since the day she arrived, and I like to think she would probably enjoy some time just hanging out.  With the solidly frozen ground came a lumpy disaster in her paddock.  Unfortunately, bless their souls, my wonderful In Laws didn't really thoroughly think-through their layout when building the paddocks some 30 years ago, because 4 of the 7 in the block aren't accessible with Machinery. As well, the footing is composed of 30+ years of broken down manure, so the drainage is subpar.... so as you can imagine, what was lumpy, mucky yuckiness a week ago, is now the exact same - but frozen solid.  As a result, I don't think Kai has been moving much.  For the most part, she's been chillin' at the back of her paddock where it's a little smoother, however I noticed today her hind legs were slightly stocked up.  Luckily there was no heat or excessive squishiness, so I think it's just a matter of lack of movement. 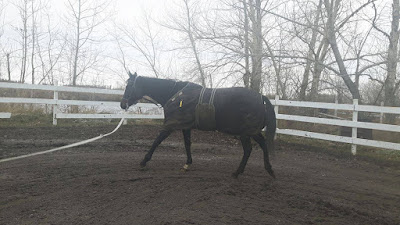 I lunged her a few days ago and promptly caught shit from my husband about it because she punched holes in some areas of our freshly floated arena that weren't 100% frozen yet.  To be honest, he's right. I completley jumped the gun, although her spooking and attempting to canter around a 10 meter circle on shotty footing didn't help.. Regardless, Hubby came to the rescue and re-floated the semi-frozen footing to the best of his ability.  Moving forward, today it's fully frozen and albeit a little lumpy in some spots, at least she wasn't going from solid to squishy over and over again, because that's grounds for a broken leg - which is why I ended the last lunging session after accomplishing a whole crap load of nothing. 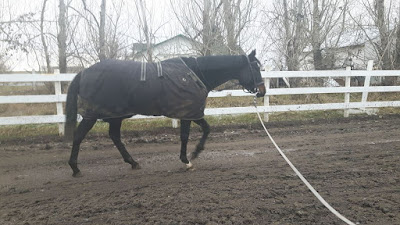 So today I took her to the area of my (tiny) arena that she hadn't seen yet.  Immediately her ginormous ears tuned in on some 'scary' stuff on the other side of the fence.  These things were comprised of a lone, horse eating jump standard, a single, busted up and delapitated jump fill box, and 2 rusted old steel barrels.  I had previously decided to lead her around the circle prior to sending her out for her to check out her surroundings.  So as her ears flicked at the sight of these murderous things, I halted her, told her she was a good girl, and let her gather herself.  Much to my surprise, she calmly walked past them after she was allowed a few moments to survey them.  I walked her a second circle to be sure she was confident going past them, and sent them out on her way.  I was so pleased to see that she didn't once bawk, feel some wind up her tail, or otherwise just act like a goofball like she has recently.  She calmly, quietly walked around the circle. In fact, she seemed a little miffed that I would even expect her to be doing anything other than sleeping on this balmy winter afternoon.  She should count her blessings, I let her keep a blanket on because I knew I only intended to school the walk on the lunge for a few minutes.  We lunged calmly in both directions before I allowed her to stop and walk into me. 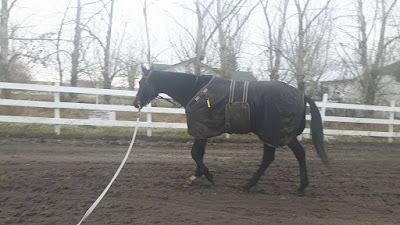 I did notice she's a little stiff today in her hind end, and she's pussy-footing over the frozen ground. I believe our weather and footing over the past week and a half is to blame.  Her feet are full of moisture from the mud we had, and now she's stumbling through the frozen tundra like a drunk eskimo... I imagine this is all grounds for becoming stiff. 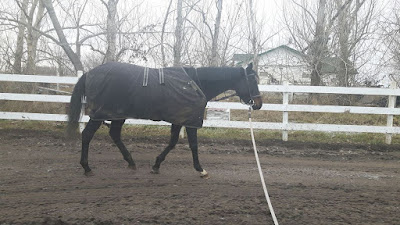 I will monitor her, but there is little cause for concern at this point in time.  So, after about 10 minutes I walked her back to her paddock where she stood like the Queen she is for her bridle to be removed.  She attempted to rub once but before I could even correct her, she realized that was no longer acceptable and waited patiently. 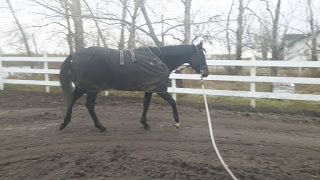 Over all, I feel like the "quality, not quantity" rang true today, and I was SO pleased with Kai from start to finish.  I think today, albeit 'simple' in terms of work, was our best day yet!

For the record, if anyone is curious - I absolutely love this blanket from Schneiders.  I should really blog a review on it, but I will save that for another time because I think i'm burning supper - woops!