November 17, 2016
I'm going to keep this baby hopping because it seemed super informative and fun - perfectly suited to someone new to Blogging like myself!  I got it from A Enter Spooking, who snagged it from it's originator, Viva Carlos so lets get started!

How old is the youngest/greenest horse you've ridden?
The youngest Horse I've ever gotten on was Kidd, as a late 2 year old.  I spent the spring/summer/fall of his 2 Year Old year doing lots of ground work, driving, etc and he had 4 brief, light rides in the Fall of that year.  His first ride I had my Husband lead me around on him for a few circles in the arena before I patted him and stepped off without incident.  A few days later my nephew-in-law came out and wanted to go for a ride.  At the time, Ray's older gelding Rocky was the only 'safe' horse available on the property, so naturally we put the nephew on him.  Ray asked to ride Kidd and knowing that Ray has likely started more horses than I have, I agreed.  He started off in the arena before venturing to the lawn (which is conveniently sized almost identical to a 20x40 dressage ring) with his nephew and sister.  They then went for a walking trail ride, where Kidd acted like an old pro!  Following that, I rode him on the trail with Ray on Rocky, and then Ray's older sister came up for a family supper and she and her boyfriend went on a trail ride.  His older sister hasn't ridden consistently in many years, but Kidd was seemingly very trustworthy.  Following that I gave him the winter off and started back in the spring.  I personally don't like getting on horses until they're typically 3, or sometimes in special cases like Kidd I will do a light backing earlier, followed by a lengthy time off. 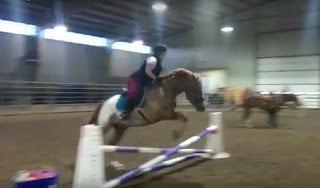 How old is the oldest horse you've ridden?

That's a tough one.  I don't know if I can single out anyone but I guess if I had to pick it would be a toss up between one of my best friends horses, Nifty, and my husbands older gelding Rocky who are both in their early/mid 20's.  I also exercised a lesson horse when I ran the lesson program at the local indoor who was in his late teens.

Were you scared of horses when you first started riding?


Would you say you’re a more nervous rider or a confident rider?

This is a very telling question.  I'm very confident in my skills as a horsewoman and I am very comfortable on most horses, but there are some that make me very nervous.  Many give me props for riding Kidd as well as I do once they find out how stupid silly and spooky he can be, but it hardly crosses my mind... Although, he did have me a little tense this spring/summer when we bolted every time we Cantered.. so glad that seems to be behind us.  As well, I rode a horse who I knew was 'quite broke' in the ways of Dressage and my friend rode him beautifully, but when I got him he felt like he was about to explode. Honestly, I didn't even Canter him. He was SO uncomfortable to ride, and I just wasn't willing to put myself in that position. I had nothing to prove, and no need to risk my life, so I respectfully toodled around at the Walk and Trot and got off.  I know my heart will be in my chest the first time I get on Kai due to a landslide of emotions paired with seeing how well she can buck, but I've never been crippled in fear.  In fact, i'm so excited to get on her!

A time you’ve been scared for your life? (horse related)

Absolutely, and I think that's 100% normal and reasonable to feel.  I already mentioned 1 time previously, but more recently Kidd and I spent the entire spring and summer months bolting in Canter (especially on the right lead).  It's behind us now and it never stopped me from trying to improve the Canter, but towards the end when it was getting progressively more 'serious', I did tend to be tense just thinking about Canter. 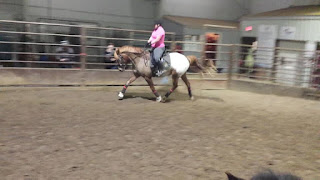 Have you ever fallen off at show? What happened?

Yes, I sure have haha.  I fell off a few times (okay well, at least once that I remember for sure but I feel like there was more) Jumping because my first horse Molokai was kind of crazy, and I also fell off in a flat class on a green horse who got boxed in, closterphobic and panicked.  He bucked me off in the middle of the flat class and ran to join his buddy on the opposite end of the arena.  Needless to say, it never gets easier. It's always embarrassing and painful.  As well, not that it was at a show but I recently have developed the ability to fall off while getting on.  Yes. You read that right. 3 times in the past 4 months in fact.  The first time Kidd and I were away at a show in June and I hadn't realized I was standing right on the edge of the mounting block, as I pushed off it flipped and I fell flat on my ass in front of at least 10 people.  The next time, I was at a clinic and I went to get on, knowing FULL well that Kidd is 'weird' about whips and he was already eyeing up the whip in my hand before I swung a leg over and the second it moved he bolted.  I fell flat on my ass again, and all I could say was "DONT WRECK MY TACK YOU LITTLE SHIT". The clinician, who has become a good friend of mine, was worried but I hopped back up and carried on. I had a great lesson too!  Thirdly was at the Fall Finale show.  For some reason I felt really nervous (I don't usually get overly nervous at shows) and my knees were shaking so bad that I went to step up and my knee gave out and I like, flipped? I don't even know, but my left him was touching Kidd's left shoulder and I was facing backwards mid-air with my foot still in the stirrup.  Luckily my Alberta Bestie was holding Kidd (and laughing at me), although I don't think he would have gone anywhere.

What’s a breed of horse you’ve never ridden but would like to ride?

This is a tough one.... I always say that I don't have a favorite breed, I love horses in general but I certainly prefer some breeds or types over others.  I have ridden quite a few different 'types' of horses from Shetlands to Belgians, but I would love to ride some fancy ponies (a GRP or Welsh), and every type of Warmblood.

Hm.. I've had the pleasure of dealing with some real gems (I'm lying) over the years.  I think in terms of 'dangerous behavior', I would have to say Molokai *snort*.  In case you missed it, Molokai was my first horse. She was a Black OTTB Mare with a rearing problem.  In hindsight, I'm sure it was 98% my fault but regardless I suppose I would have to single her out.  Ironically, most horses I ride/rode who behave poorly for their owners/riders behave well for me, and vice versa. 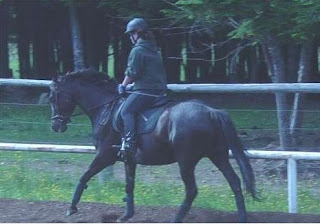 The most frustrating ride you’ve ever had?

After 15 years of riding, I think it's really hard to pick the absolute worst....  For my C1 Pony Club testing, the Testers were young and didn't adjust the lines on Stadium properly, and I managed to fall off Molokai twice as a result.  That afternoon we had the Cross Country portion, and to sum things up Molokai was a wildwoman on XC.  She launched about 1 1/2 strides early from a Triple Bar (again, likely mostly due to rider error) and managed to stick her front feet before the middle and top rail.  Of course, I was ejected and burst into tears.  At that point, the testers just told me to get back on and they would pass me, baha. It was certainly a rough day that stands out.