It's been a while since I have made a post about the breeding season, but that's probably because I don't really have much to update!  This post is going to be a little dry on the media front because I haven't transferred photos from my Ultrasound machine recently, but hopefully in my next post I'll have lots to share.

We are busy at my in-laws with the TB breeding program, but I have continued routinely scanning Vida so I can keep on-top of any potential issues that could crop up.  At this rate, the money I have saved in scanning V myself would equate to about half the cost of my ultrasound machine already, so I guess that's a good thing - plus I'm getting tons of practice in!

To date, V has had two full cycles - meaning she is no longer "transitional" and has ovulated twice.  She's on a slightly quicker schedule than the general 21-Day suggestion, which isn't abnormal, but it's something I wouldn't have known had I not been regularly scanning her which could have posed potential issues when it came to inseminating because I live rurally, and semen takes 2 days to arrive despite FedEx's "overnight guarantee" (ask me how I learned that the hard way - eye roll - ).

The last two scans I performed were on April 15 and April 18.  On April 15, she had a dominant follicle that was losing it's shape and roughly 38mm on average.  She had decent Uterine Edema (about a Grade 4 on a scale of 0-5), and she had been flirting with the resident stallion the days prior.  It was safe to say she was in heat, and that was confirmed on the 18th when a fresh Corpus Luteum (CL) was present in the place of the dominant follicle.

When a follicle ovulates, it "pops" and leaks the internal fluid out, which contains the ovum (egg) and together they travel down the Oviduct (their version of a fallopian tube), and the structure that contained the fluid and ovum then hemmhorages with blood, and forms a Corpus Hemmhoragicum (CH), which then transforms into a Corpus Luteum.  The Corpus Luteum then matures and within 5 days it is considered to be fully functioning.  It's the presence of a CL that suppresses estrus (IE when our mares are no longer in heat), then begins to break down and eventually disappears and our mares return into heat.  We can identify a follicles in their various stages (developing and pre-ovulatory), CH's and CL's via ultrasound, though they can sometimes be tricky to differentiate depending on the timing, but they are all important stages when it comes to determining the timing for breeding.

So at this point, we know that V ovulated most likely on April 16 or 17, which means she should be returning to heat and nearing the end of her cycle (IE ovulating) sometime around May 7 - 9.  Due to the nature of shipped semen, I will be administering an ovulating agent at the time of Insemination, however it's important to note that the use of these products do not force ovulation, they simply speed up the inevitable - the follicle has to already be on the trajectory to ovulate and we can identify this with timing, the presence of Uterine Edema, and the tone of the uterus and follicles as well as the cervix position.   The follicle also needs to be at least 35mm in size for it to respond to the drug. I am lucky that I also have access to a stallion where V currently lives (at my in laws) so I can tease her to confirm my findings, though not everyone has that option. 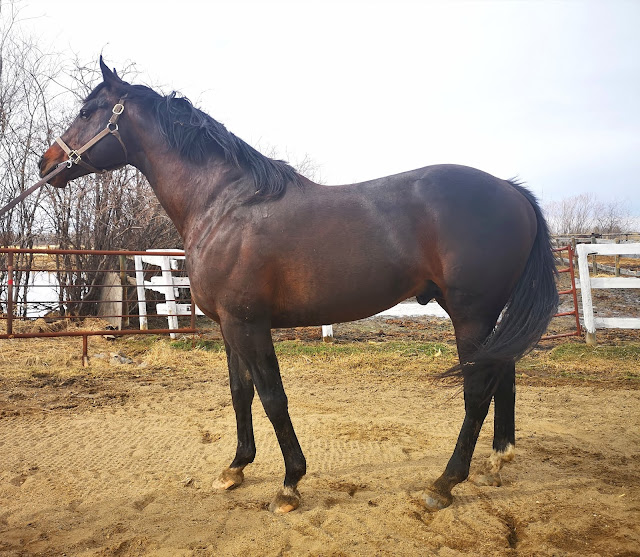 Now that I know she's ovulated, my job is to track the development of her follicle(s) and hope that she has 1 dominant follicle that takes over as she approaches her next period of estrus (heat).  In the event that she has multiple dominant follicles, I will have a decision to make - I can breed her and deal with pinching a twin, or I can wait for her to ovulate, wait for the CL to begin to function and "lyse" it with another form of medication that will cause her to then return back into heat sooner than if left to her own devices (known as "Short Cycling").  In the event that she only has 1 dominant follicle (the goal) progressing, I will be making the order for Semen on May 4 or 5.  This would put the semen arriving on May 6 or 7 and her follicle should be large enough at that point that it would respond to the use of an ovulating agent.

So, for now, we wait. In the mean time, I have some other exciting things happening in the background, but I will save that for another post!