March 06, 2020
After our disappointing attempted trip down south at the end of Week 7, Sierra wound up staying an additional week as I was able to find a professional shipping company that was able to take Sierra door-to-door on Saturday, March 7th weather pending.  Initially I looked at the wrong calendar and I spent most of the week expecting her arrival on Friday so I was once again disappointed to realize she wasn't due to arrive until Saturday.... but then the weather once again ruined our plans and the shippers have pushed the trip to Sunday.  After half a week from hell it felt like just another nail in the coffin, but i'm proud to say I managed to claw myself out of that deep, dark corner of my mind and push on and I can't wait for Sierra to get home!

This week I chose not to do a ride-by-ride break down, because lets be real - they were getting repetitive.  Sierra had one ride that was another one of those 2-hour hash-out sessions that occurred from time to time, but for the most part she was really good.  One of the rides this past week, CA reported was her best ride on her to date.  She was relaxed, happy, got all her changes even on quarter lines, and so on.  She ended this training experience with 39 rides over the span of 53 days - keeping in mind she had the first week off due to extreme weather conditions.  She averaged 1 day per week off.  CA's Full Time training constitutes 5-6 days a week of work, and she really delivered in that aspect.

The dynamic of mine and CA's discussions have mostly shifted as of late - what was discussions 95% about Sierra and her development has become conversations predominantly about me.  I'll be honest, I'm really concerned about my ability to maintain all this training. CA has told me several times she thinks I will be uncomfortable with Sierra's level of forwardness, and I worry I will ruin all the fixing that took place.. Plus i'm pregnant and at any point my body could say "no, this is too much".  Luckily, my husband has offered to keep Sierra semi-fit for me while i'm off but the unfortunate thing about pregnancy is you really have no idea what will happen until it does because everyones story is different. Some women ride up until the day before they pop, others quit the second they find out, and then everywhere in between riders hang up their helmets until they feel ready again.  I'm nearly 20 weeks, which means i'm basically half-way there. I still feel 'good' and tentatively intend to ride as long as my body will allow, but pre-pregnancy I had back problems and this kid has been making matters worse so even more than the concern of risking the pregnancy (each to their own but I could get kicked while feeding and be at just as much risk as riding IMO) is the risk of worsened long-term negative effects on my body that already make riding a little more difficult for me.

I have had some concerns that my horse was being developed into more of a professionals ride than what I want - an ammy-friendly, all-around horse who gained some confidence, correctness and filled in some holes.  This is NO way a reflection on CA and I have zero concerns or doubts about her training, but other than a bareback toodle through the snow last week, I haven't sat on a horse in 9 weeks.  9 Weeks. That's a lot of time off, plus my body has changed so much since then - my center of gravity is different and things are going to feel wonky for the first bit... throw that hot mess on top of a fit Ferrari and it might be a recipe for disaster.  I spoke to CA about my concerns re: Sierra being more of a pro ride than what I 'asked for' but at the end of the day I really cant evaluate that until she's home and I get a few solid rides on her.

Forward doesn't scare me and I am comfortable with it as long as it's not that god-awful plow-horse type forward where they're pulling and yanking and pile-driving their shoulders into the ground; as long as there are brakes and respect for half halts in there, I am fine.  Sierra was a bit like the first scenario some days before I sent her down, so while I am not worried about about her forwardness, I AM worried about my lack of level of fitness and my ability to keep up to her effectively.  CA has mentioned she's done a ton of forward and back to really solidify the correct response to the half halt (IE forward into working or collection and really engage the hind end off the half-halt), so hopefully Sierra remembers this when she comes home!

On Friday CA sent me some video of Sierra and I thought she looked great.. a little scary at times (strong, forward, happy) but great.  I didn't ask CA's permission to share the video and I wont - I think it's good to keep that sort of stuff private and at the end of the day i'm really happy with how things looked and that is what matters to me - I wont subject them to internet trolls, but here are some screen shots!

Her canter has massively improved -it's HUGE!  She's also nearly confirmed in her changes and as such she is very 'extra', including a tempi change on a circle that wasn't requested lol.  CA's really happy with how happy and confident she is even though it means she sometimes anticipates things when she thinks she knows what she's doing, but we can work with that. 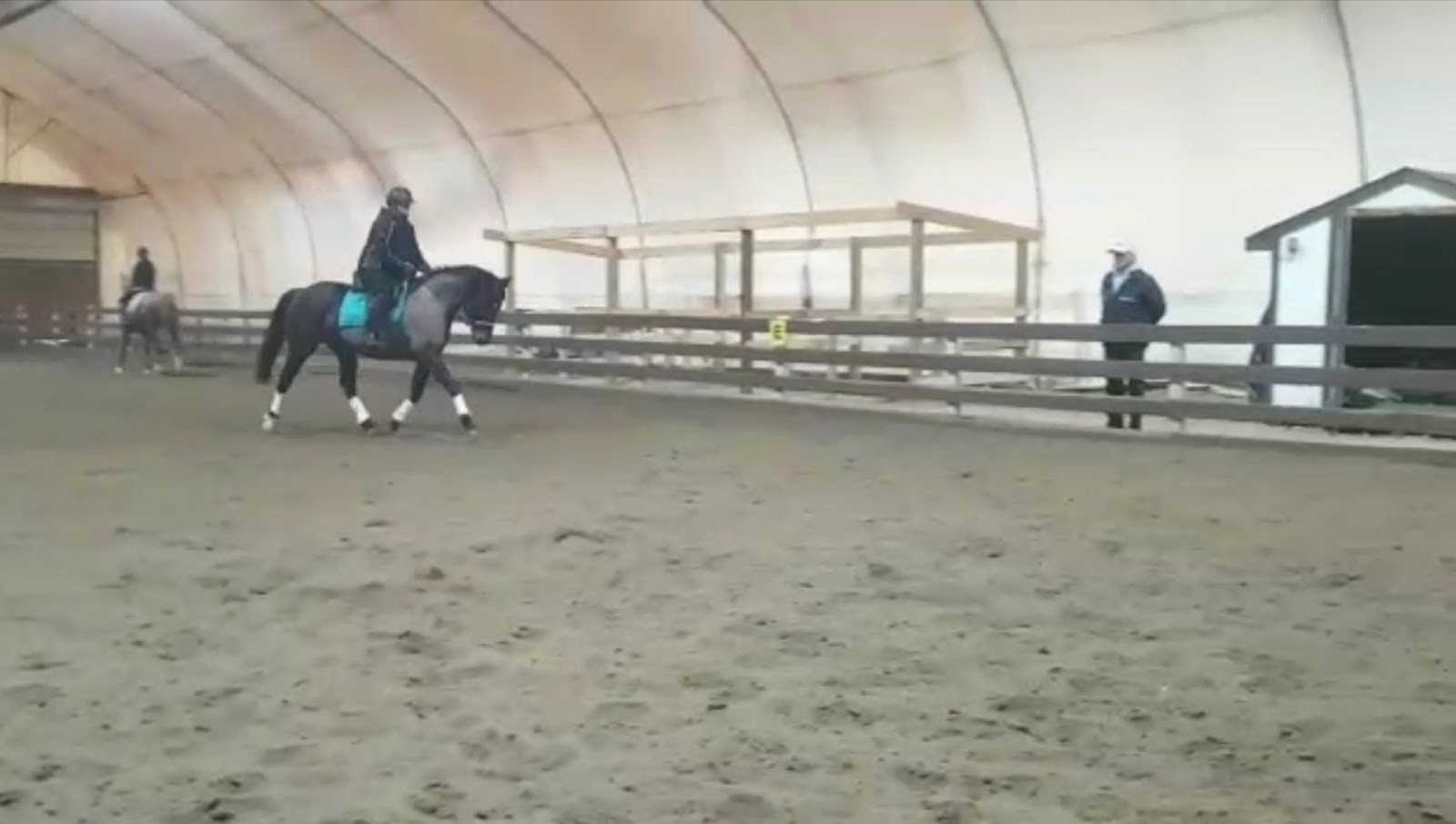 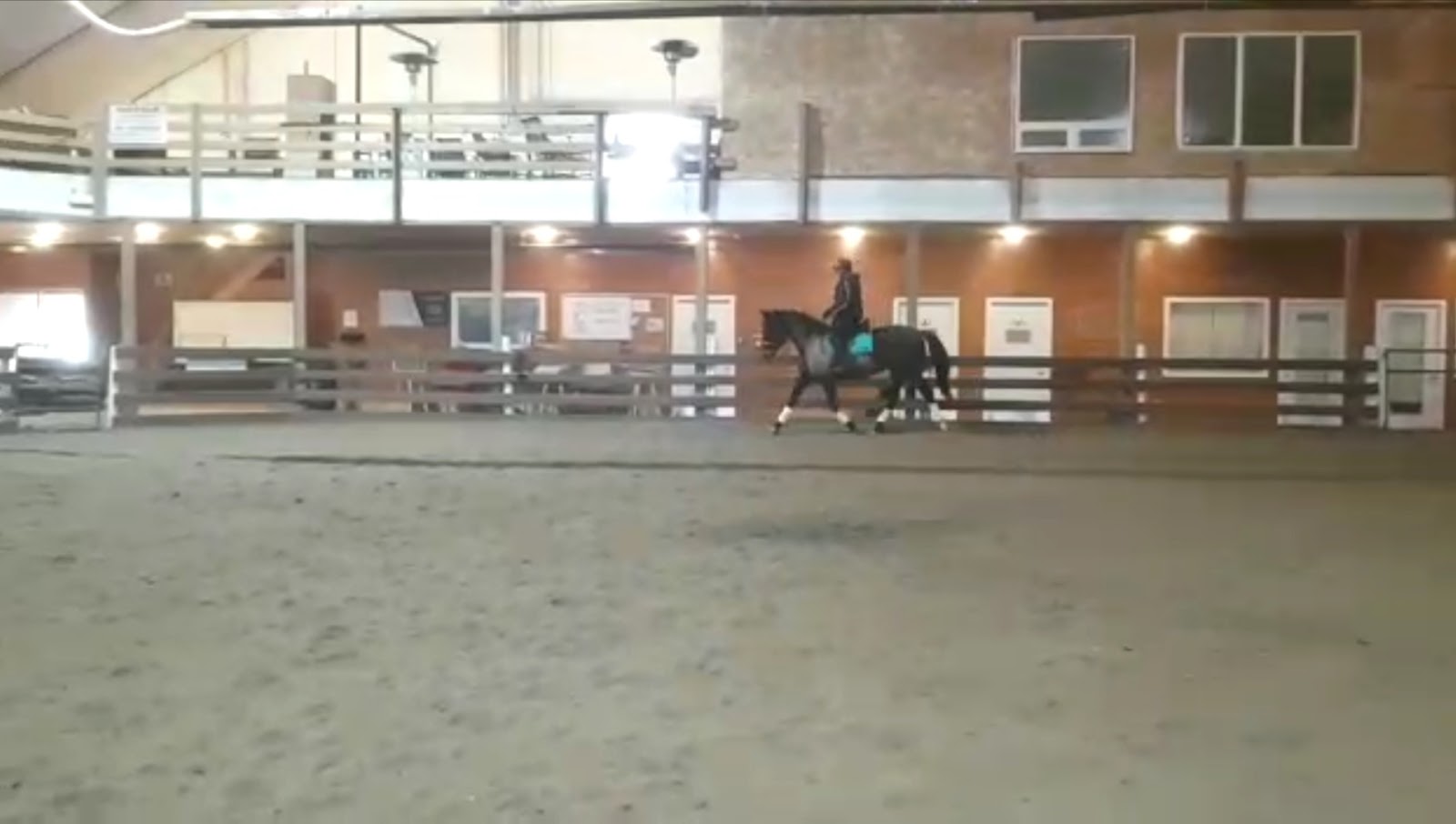 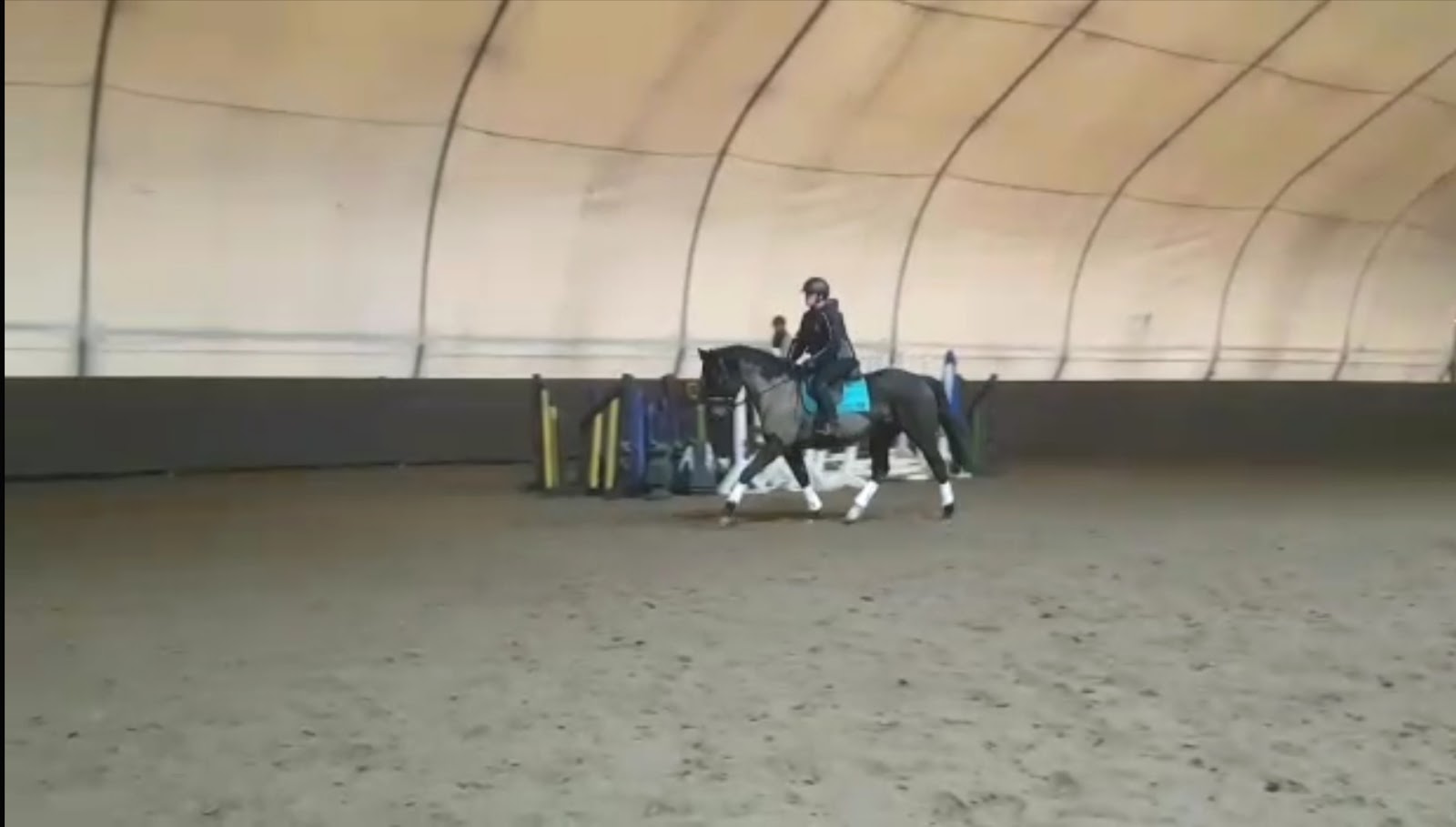 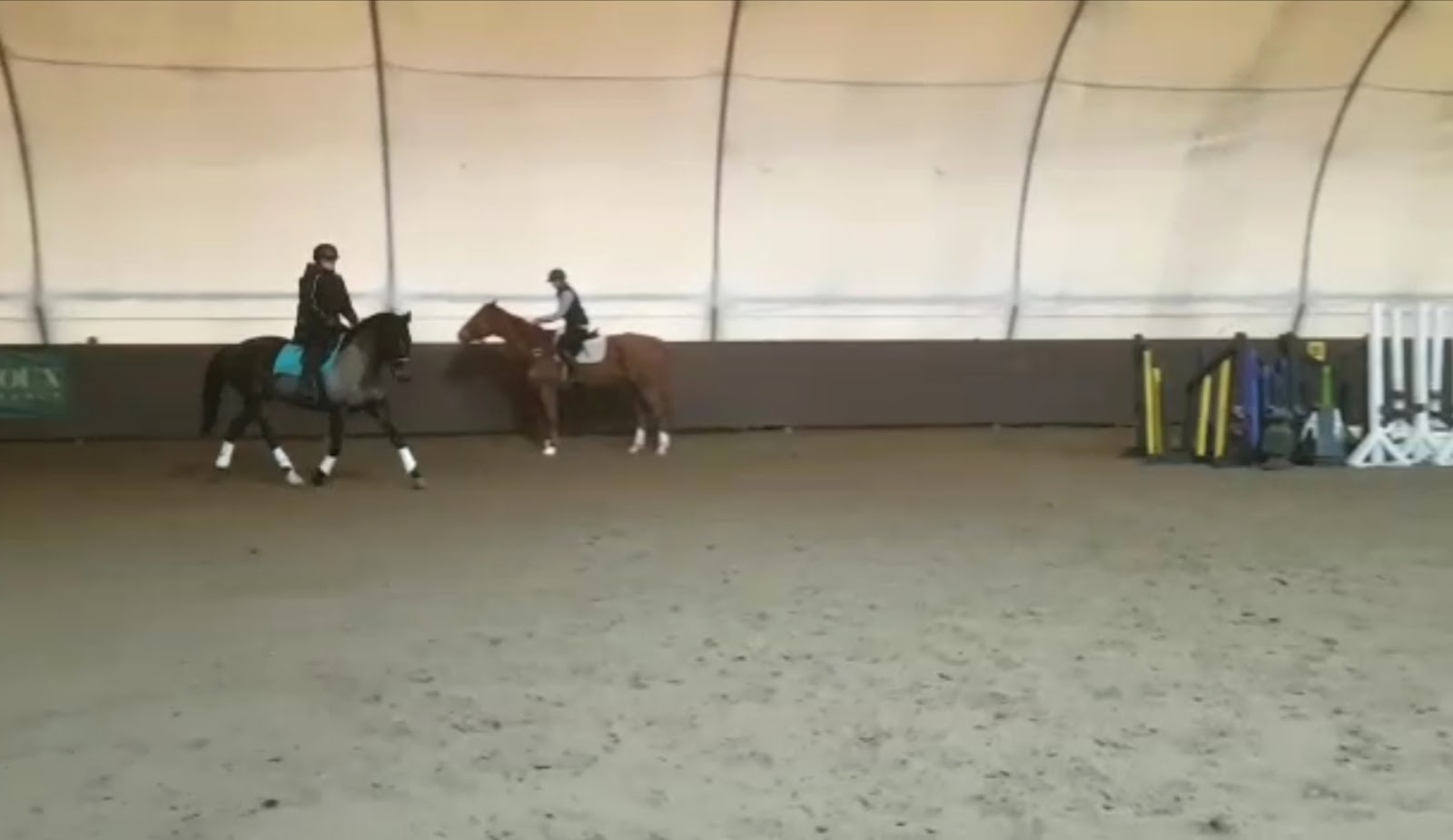 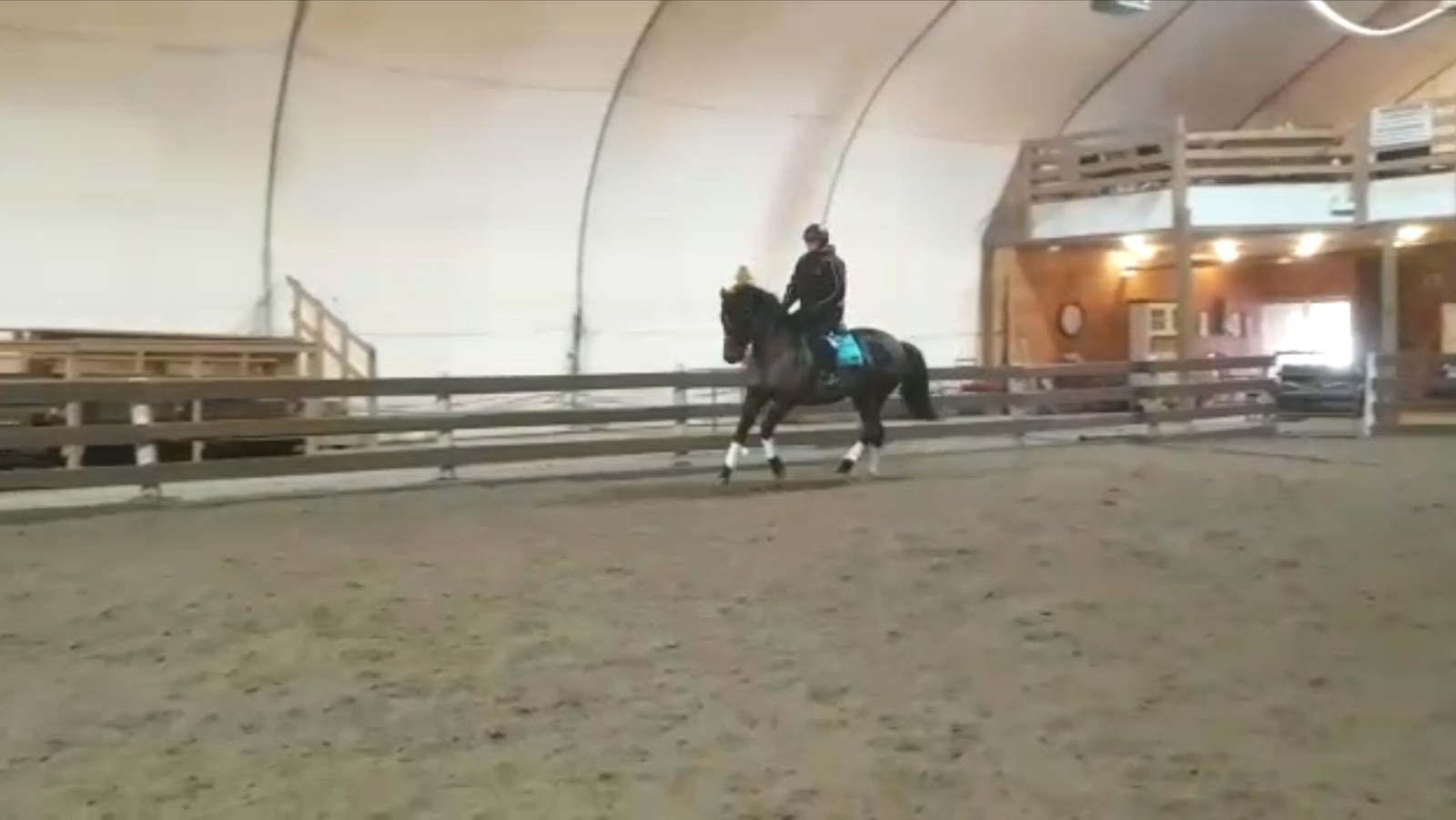 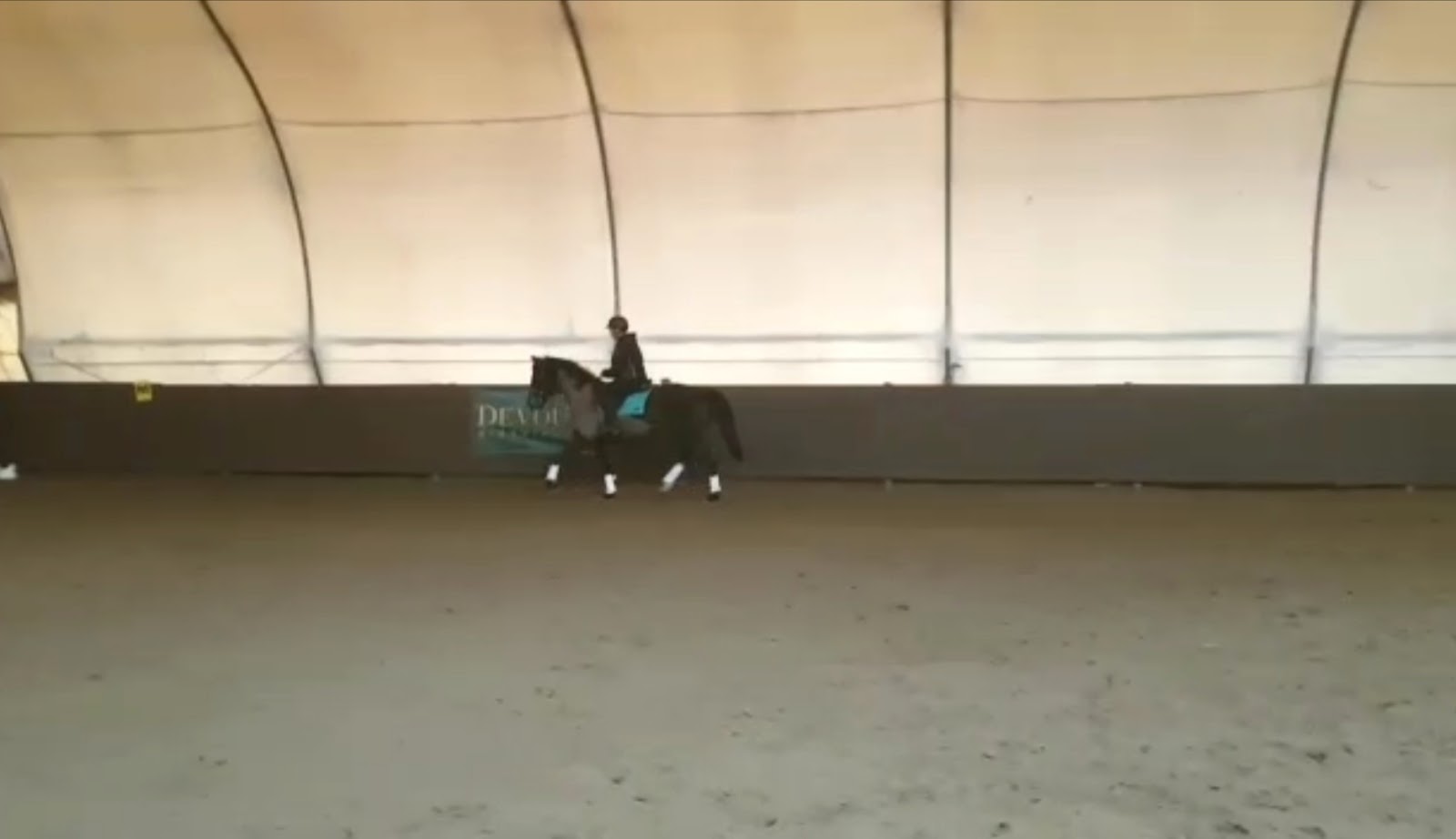 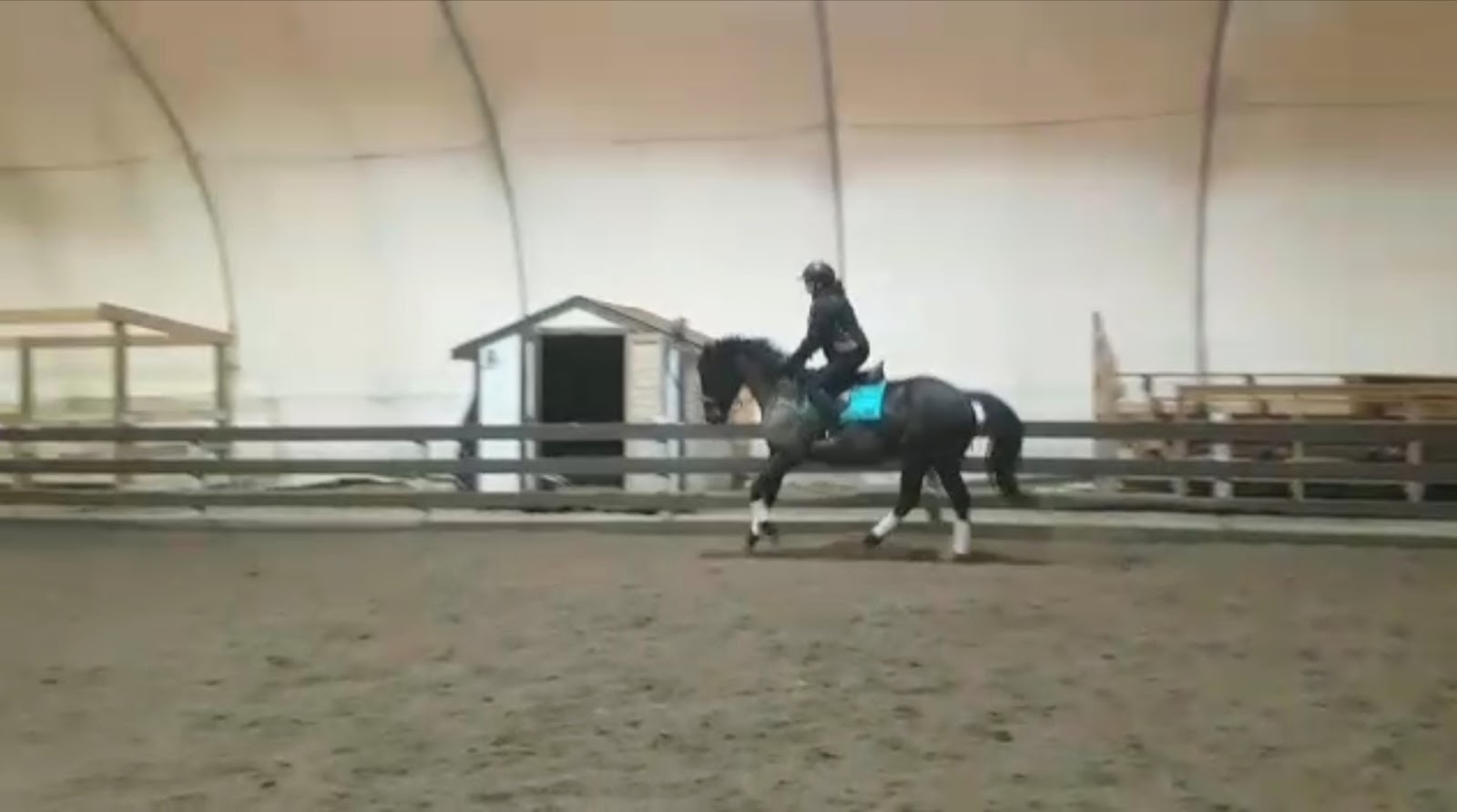 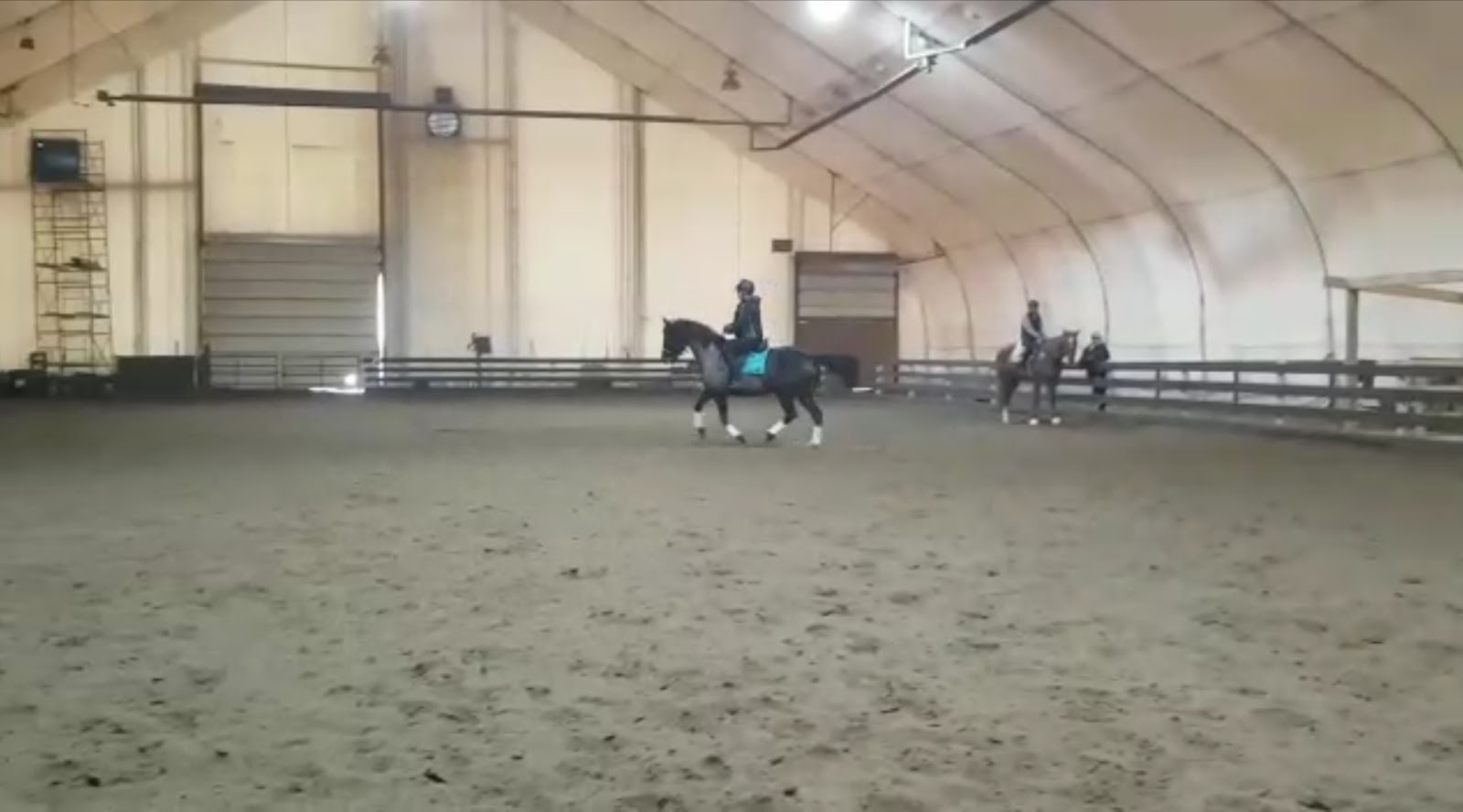 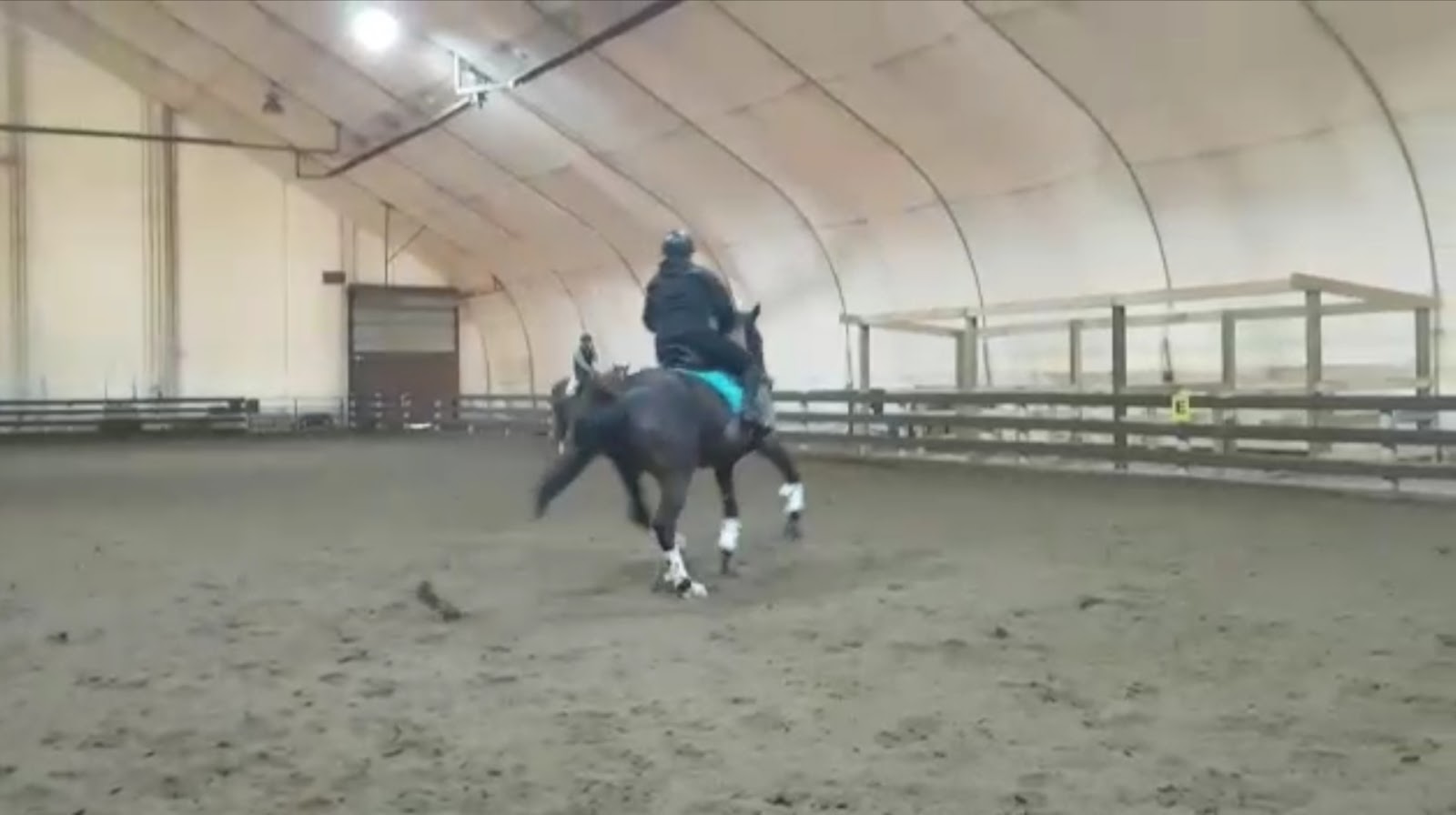