March 16, 2020
This passed weekend, CA traveled north for her first clinic of the season. Sierra had been home since Sunday night, so I had 4 rides on her leading up to the clinic.  While I would have liked a few more rides on her, it was still a fantastic opportunity to get some direction after she spent two months with Sierra, as I didn't have the opportunity to go down and pick her up and do some lessons prior to heading home due to weather.

I had scheduled myself to be the first lesson of the day on both Saturday and Sunday, and CA arrived roughly 30 minutes before my lesson on Saturday (Day 1 of the clinic).  I had spoke to her previously and advised her that I am extremely out of shape and have a harder time with breathing due to pregnancy squishing things, and that I had only been riding about 25 minutes from start to finish, so there was no way I could survive a 45 minute private lesson.  We had chatted about her popping on Sierra as well, but that we would play it by ear.

The moment I got on Sierra, I knew she felt a little more fractious than she had been all week.  The barn was getting fairly busy with clinic participants, and there was a lot of people and things moving around down at the scary horse-eating end that had her quite on-edge and unfocused but I did my best to keep her focus without choking her and ruining her confidence, but as she became more wound up I found it really difficult.  We worked a lot on my struggles on the right rein as I had told CA I was terrified of ruining how straight CA made her, but I didn't know what I was doing wrong because she felt like a stiff 2x4 travelling to the right.  We did several exercises to maneuver her body with minimal rein influence (especially inside rein) such as Shoulder In, leg yield and 2-loop serpentine's where I turned her off my leg with essentially no contact.  It was tricky, and we almost ran into a wall several times during the serpentines, but eventually it got a little easier.  Ironically, the Shoulder In was easier on the right rein than the left, despite struggling to ride on the right rein in general.  Unfortunately, before we could go any further I was absolutely exhausted beyond my ability to push myself, and as such we swapped places and CA got on.  She immediately had to tune Sierra back in a bit, especially off her left aids and Sierra ended up getting even more wound up and into a full body sweat, but overall it ended well.  I was a little disappointed in my body for letting me down so-to-speak and the mental adjustment to not being able to push my body like I have in the passed has been a tough pill to swallow, but luckily I had one day left still, and I told CA I really wanted to work on tracking right, and work on the Canter in that lesson because I was struggling with it throughout the week.

On Sunday, I caught Sierra and we made our way into the arena but I knew that once again, she was in a mood - possibly even more so than the day before.  She was less spooky and reactive, but was very mentally not-present and just wanted to fly around the ring ignoring me.  CA and I spoke at length as I trotted around the ring during my warm up and I told her I am totally fine with how forward and "in the hand" she felt, but I don't enjoy it when her brain isn't turned on.  CA continually said "I know what you're feeling because I've felt it, and it's not a good time but we have to work through it".  I was glad that she understood what I was feeling and I think had she not just spent 2 months with Sierra, she wouldn't have quite understood the struggle-bus I was trying to pilot around the ring.

On Day 2, we did a lot of talking about my biomechanics and how we influence our horses with our body without realizing it.  We did some work in the trot where I continued to feel like I had to tug Sierra around a circle with my inside rein while using everything I had in my outside aids to just make it around a circle, and it was really frustrating.  I had previously described the struggles I felt in the Canter, so near the end of my warm up CA had me go into the Canter on the left so she could watch before we stopped and she called me into the center. 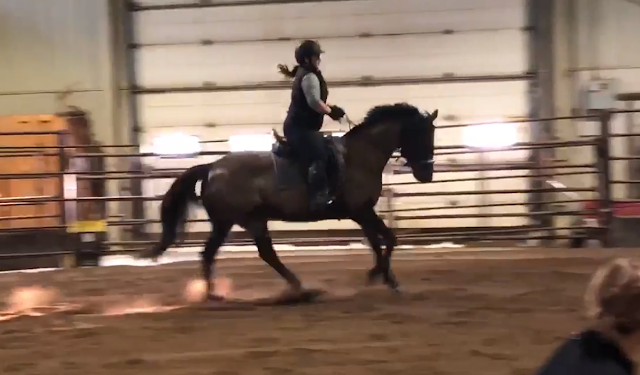 Once in the center, we talked at length about my struggles on the right rein and she told me my horse isn't crooked - I'm crooked and to make matters worse - i was crooked both directions, and therefor making her crooked. I mean, I knew that was probably the case - but I didn't know what I needed to do to fix it.  I struggle on the right rein due to an old injury to my left hip, but I'm tired of it and I need to figure out how to fix it.  As we chatted, CA looked at me from all angles while I rambled on about my woes, and then she asked me which hip feels more forward. I immediately responded with "my right hip always feels more forward, no matter which direction i'm travelling" and she told me I was correct.  As I was standing there, she had me bring my left hip forward (and thus my right hip back) in the saddle then stay in that position and describe what happened to the rest of my body when I did.  Initially, I simply rotated through the waist but my hips didn't move, so she corrected that incorrect answer by keeping my shoulders square to Sierras while bringing my left hip forward and I instantly felt my left thigh engage and my right calf come on.  She warned me of the risk of watching that my inside calf didn't get clamped on and how that may influence Sierra. As a result, we went back and for standing still while I maneuvered my body to bring my left hip forward without twisting my upper body or clamping my right calf on. Riding is hard, guys.

Once I felt like I had the feeling at the halt, I addressed it at the walk.  Once I felt like I had the feeling I moved into the trot, and immediately felt better BUT my right calf was, in fact, clamped on for dear life.  I worked to relax my lower right leg and we determined that at times I was bringing my left him forward by clamping the right leg to bring the right hip back - wrong.  For a moment I went back to walk to re-establish the feeling of just engaging my left thigh and bringing the left seat bone forward then went back into the trot. Suddenly, I could steer without having to drag Sierra around the circle off my inside rein and it was really remarkable.  We proceeded into the Canter on the right rein and even though this re-arrangement of my body made me miss the lead (oops), I set Sierra back up and we entered the Canter on the closed side of a circle.  CA immediately told me I was going nowhere, but my concern of not being able to make it around the open side wreaked havoc in my brain until I remembered to adjust my pelvis and we made it around the open side of the circle with ease - at this point, I felt as though I could trust her and I stepped on the gas as we easily made our way around before transitioning down and going back to the center to talk to CA about this light bulb. 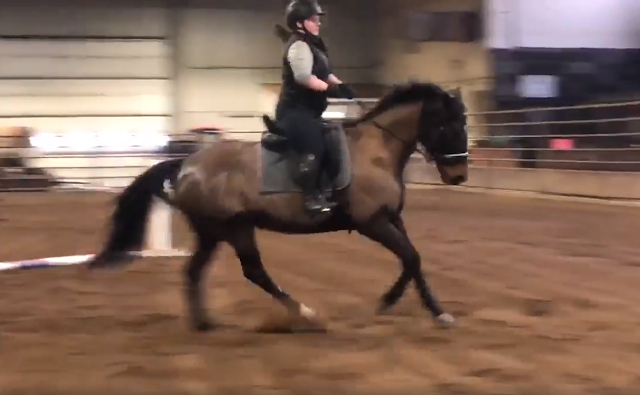 Overall, I still have so much work to do on myself but I feel so much better and have some fresh new tools to keep on this path.  Sierra has come back so different in her movement and it's been interesting to get used to plus be incredibly out of shape.  It was a fantastic clinic and I can't wait to see where we are in a few weeks!