November 24, 2019
Over the past few days I have made several posts about meeting my new coach and how Day 1 and Day 2 went in a clinic with her.  I stupidly signed up for 3 lesson slots and by Sunday my brain was so full and my confidence was both shot and inflated at the same time (wut?).  It was a hell of a weekend; it was hard, I wanted to cry on more than one occasion, I sweat A LOT, and I felt like I had no idea how to ride a horse.  Despite all that, I still somehow felt more confident than I have in YEARS and I took more away from this clinic than I have in a very long time - possibly ever.

On Sunday I rode towards the end of the day, but there had been a few jump lessons prior to me so there were some poles and things set up for various exercises.  The main exercise considered of two fences on the quarter line angled towards the wall, with two jump boxes spaced about 3ft apart for riders to work on bending lines, striding, etc.  The object was to ride between the two red boxes, play with adjust-ability and so on.  My lesson was a flat lesson, but I wasn't able to escape the pole work.  I had a feeling I would have to school the adjust-ability exercise, and I wasn't wrong.

As the lesson began, CA took me right back to the basics we had been establishing all weekend - let go and go forward.  Sierra was absolutely exhausted and it took me an entire 5 minutes to get her up when I went to catch her, but at the sight of jumps she perked up and we began the bending exercise in the trot where she became quite inverted and unfocused, but eventually sort of settled.  I was allowed to maintain some contact in this lesson as long as I wasn't choking her, or micromanaging in the contact.  I could keep a feel of her mouth, but I wasn't allowed to 'do much else' so to speak.  Much like Friday, it was scary and invigorating all at the same time but I did my best to buckle down and trust her. 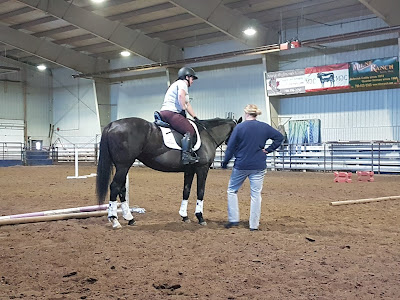 We alternated between doing some pole exercises and just going large and on a circle, and we worked on some transitions without pulling and/or taking away.  We also worked on the dreaded downward transitions off only my seat, and cantering out of a walk with zero contact.  Much like the previous days, this no-contact thing was really mentally straining. Not only does it go against all my former training about maintaining contact through a transition, half halting etc to 'set them up' and so on, but as 'backwards' as it felt, I understand the importance of it as *an exercise* and CA was quick to remind me that "you wouldn't do this in a show, but we're schooling".  She also reminded me that it's mostly for me, not Sierra although I did find that after some time Sierra was quicker and happier in the transition because I wasn't hanging off her.

The first time we cantered over the poles, between Sierra being excited and finding a long spot, she absolutely launched over them which got me a little unseated and unprepared to guide her between the red blocks. I unfortunately yelled "holy sh!t b@lls" before circling back around to re-start the exercise.  We found the same long spot but this time I was more prepared and was able to guide Sierra through the exercise.  We got 9 strides, but were supposed to get 8 so we had to come back around and try it again.  We managed to accomplish it with relative ease, and were alotted a walk break for our work before going the other direction.

Following that, we changed directions to repeat the exercise off the right rein and despite some pilot errors due to that damn drifting shoulder, we did manage to accomplish it easier than off the left.  The first trip through, Sierra came off the first set of poles and shook her head which didn't give me much time to organize for the blocks so we subsequently ran one right over.  It was an embarrassing act, but also really liberating because I have a bit of a fear of tripping/stumbling/falling since coming off Kidd once when he did - We ran over a fairly solid object and didn't die, then came back around and accomplished the goal.  Everyone laughed at the long spot and CA told me "She totally saved your ass" which made me laugh and be grateful for my horse all at the same time.

We then visited the changes that CA had briefly touched on the day before, but much like then we weren't able to accomplish anything.  Sierra was very tired by the end of Sunday's lesson so we asked for one and Sierra "popped" like she was going to change but didn't have the impulsion to. I schooled a simple change then went forward down the long side and we called it a day because we were both absolutely exhausted and once again, didn't have the time or energy to open that can of worms.  In watching the video, I see just how badly I was micromanaging and letting her fall behind my leg but I know she can do them now so I will accomplish them or die trying!

Perhaps it was the feeling of utter exhaustion, but I found myself tearing up at the end of this lesson.  Don't get me wrong, I felt the sting of my eyes welling up several times throughout the weekend during my lessons, but this was different.  For the first time that weekend, CA showered us in genuine compliments.  She told me it was evident how much Sierra loves me and how smart I am to have reached the decision to invest in her and I rather than sell her and buy something more advanced.  She told me how incredibly talented and fun she is and how much she enjoyed riding her and several other nice things; but her telling me how much Sierra loves me was what really made me feel that twinge down in my belly.  I feel like I have gone back and forth for so long about 'what to do' and I have felt like I was drowning in problems with no support system in place to repair the broken pieces but despite my ego taking a total hit, I some how walked away from this weekend with even more confidence than I went in with and I am so incredibly excited for the future with CA.  Perhaps one day we will need to find a more specialized Dressage trainer, but for the time being I feel like I am headed in the absolute perfect direction and I can't wait to see what the future holds.