Ready For Take Off 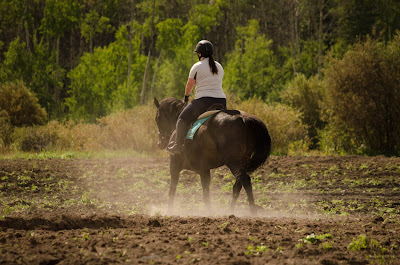 Conveniently timed with my return from holidays, we have finally received a short break in the never-ending rain that has plagued the region this 'summer'.  I use that term loosely, it's basically been October for the past two months and you might think I'm exaggerating, and I genuinely wish I was. Seriously - we had frost the other night.  My trip back home allowed me to recharge, relax and take in a lot of horsey-themed fun that reignited my motivation to get riding.  Don't for one moment think I regret my decision to spend the majority of the summer tootling around bareback because it was incredibly rewarding.  In addition, it's something I intend to work regularly into my routine for our mental health and enjoyment.  I'm the first to admit, I tend to get 'serious' very quick, and making more of an effort to 'play' is crucial to keeping things light and enjoyable, but I was eager to get home and get schooling with my girl again. 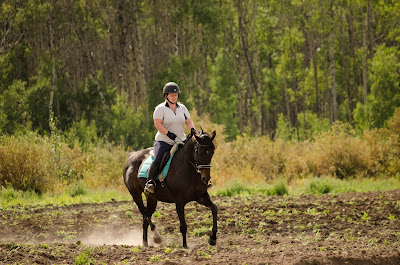 For the first time in several months, I grabbed my tack and began preparing to put a flat ride on Sierra. She had about two weeks off from any type of riding, and i'm limited to riding in the field as my arena is mid-renovation (but is too wet to work on).  As I stood in the barn, dazed and confused wondering if I use a half pad on Sierra or which girth is hers, I chuckled at myself and pondered how long it's been since I used real tack.  I was limited to a small region that was sort-of dry enough to ride on, and Sierra was a very hot, very tense, very ridiculous beast.  She literally felt like she had never been ridden before - she was so wiggly and bouncing off one aid to another and it was really hard to stay steady and 'plugged in'. A recent facebook post popped into my head about "ride the canter" regardless, so I decided to Canter each way and call it a day, absolutely exhausted and a little disappointed in myself for getting frustrated with her enthusiasm and hotness.  Just as I was about to get off, my husband came home and hopped on Banker and we went on a short hack which resulted in two OTTB's leaping sideways for half the ride as a pasture horse galloped up behind us several times. 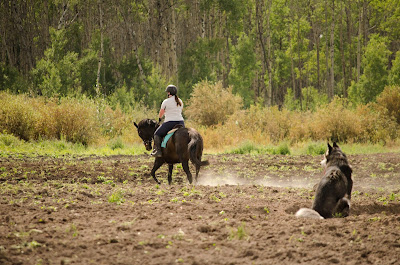 The following day I decided the best way to get past this was to jump head first into a pool of sharks a regular routine, and a friend/boarder had put Sierra and Banker in the round pen while she took her horse out for a trail ride, as Banker can be a nuisance when people ride in the field with him.  I was busy in the house, and upon finishing what I was doing I headed outside to ride. I caught Sierra from the round pen and noted she was drenched from head to tail in sweat, and was shaking.  Walking through the gate, she bolted past me and promptly spun around and stopped like a deer in head lights... great.
I tied her up by the gate to the field where she swung her butt from left to right, pawed violently, whinnied, and acted a'fool.  I had heard her whinny and saw her and banker running around a bit in the round pen while S was out on her ride, but I didn't realize she was as worked up as she was. I decided to take my time tacking up, and luckily she chilled out.
The night before, my hubby had re-discked up the area behind the barn as we are summer fallowing the majority of the large field to gain control of the weeds, and it was quite deep and fluffy, but at least it wasn't wet and mucky.  I walked Sierra up to my classy over-turned water bucket and off we went.  Banker was running around in the round pen calling for her, so we spent the first 2-3 minutes stopping and staring at him because omgomgomgineedmyboyfrirend but eventually she settled down and I had a very lovely ride.  She felt back to normal, and the deeper footing had us both exhausted in 20 or 30 minutes (I'd die on a big moving WB, I've concluded), and I ended the ride beaming. 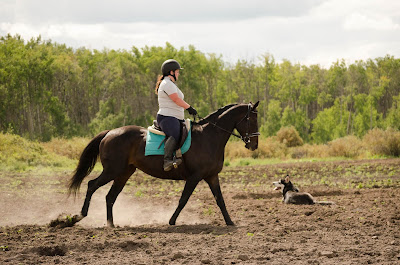 Day 3 and still feeling a little high from the day before, I asked hubby to grab my camera and catch a few photos of my ride.  It started out well, but upon his arrival she began to get more tense and hot.  I have previously noted that she seems to get 'funny' when people are near us when we ride, the most notable times being in March when I took her to two shows and she warmed up great, but as soon as the judge and steward entered the ring she got hot and worried. It really makes me wonder why, but regardless it was not only an opportunity to ride through it, it put our new bit (review coming later) to the test, because I wasn't sure if I was going to have brakes if things got hairy.

While we did stop and back up several times, I used leg yield in trot and canter to do my best to give Sierra something to think about and maintain body control and as it has as of late, when we cantered she has goten incredibly hot and subsequently blows her leads left right and centre.  I decided that we needed to suss this out a bit and while everyone knows you can't necessarily tire a hot and sensitive Thoroughbred, but my hard-headedness decided we were going to canter forever and ever, amen, until she got her shit together and stopped being dumb.  I gave her the benefit of the doubt more often than not - when she was too hot to canter on the right on the correct lead, I let her go left (the better way), and as she bounced around like a fly in a jar underneath me and her tail rung like she was trying for lift off, so I took the opportunity to try and think about my seat, as I have been noticing that when I 'still' my seat too much, she gets tighter and more frustrated.  Finally on the right rein she began to settle in the canter, and I let her transition quietly to trot where she remained relatively civilized, and we ended it there.  I decided to go on a short hack to cool her out and in one area we spent most of the time doing circles because she was worried about her friends, but upon walking back toward the barn we ventured to another spot away from the horses and she was much more relaxed. 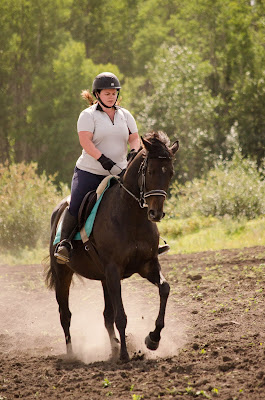 My husband kept telling me to smile at the end, assuming I was frustrated, and while part of me was because I feel like we should be 'passed this', I wasn't terribly disappointed.  Every day is an opportunity to learn something, and it has become apparent to me that I need to pay my husband in special favours to sit on a bucket while I ride in order to try and get her past her weird issue with it.  Despite her being wild and crazy 2 out of 3 times since returning to work, she did not buck once, she didn't get excessively dangerous or rude, I can grab her out of the field and hop on and go without any real nonsense, and I got off when I wanted to, not when she wanted me to.  Don't get me wrong, she doesn't usually buck but regardless it's a win in my book and I've had plenty of positive take-aways from getting back into the swing of things! 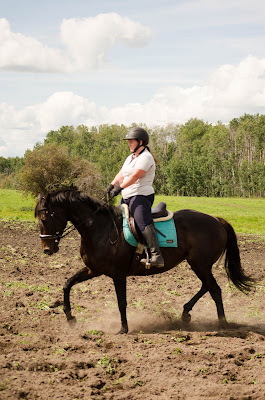 My hubby is far from a photographer and I'm pretty sure he has no idea how to use my camera, but he managed to get a handful of semi-decent photos.