March 31, 2019
Since the last horse show on March 2nd, I gave Sierra a week off followed by her previously booked annual Vet appointment at which we did her vaccines and teeth floating, so naturally that resulted in additional days off.  Regardless, I still managed to blow my goal of putting at least 4 Hrs in the saddle this month, and it's been a roller coaster of a month!  I've been significantly behind in my blogging lately, mostly because a large portion of it was spent in a poor mind set, but I have since thoroughly beat myself with the Smarten-The-Fuck-Up stick.

While I was positive and satisfied with the learning experience at the horse show earlier in March, evidently I stewed on it during that week off and fell into the spiral of negative thinking, which resulted in roughly 2 weeks of disappointing rides before I had a CTJ moment of my own.

During those brutal 2 weeks, I found each ride disappointing and frustrating.  For the first time since purchasing Sierra last June, I was getting off upset.  Even on days when we had less than stellar rides, I still got off smiling - HTS I Horse Show was case in point; but lately I have been losing my cool and found myself questioning why I even bother riding.  I decided I needed to clear my head, and asked a friend if she wanted to go for a hack down the road last Friday after I rode in the ring.  I enjoy getting out of the arena, as does Sierra, and I had hoped it would clear my head and get her more interested in sorting this out.  The hack started out great, but on the way home things fell apart and I was secretly incredibly upset.   I had convinced myself that I wasn't going to ride in the second horse show on March 30th, and that I was going to sell Sierra and give up.  I found myself looking forward to riding, but riding very abrasively - a way which I know does not vibe well with Sierra. 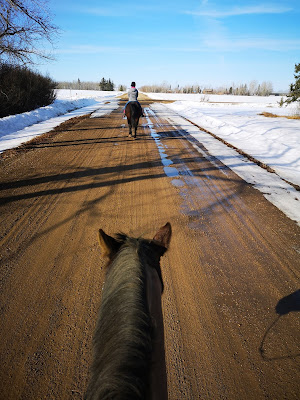 Earlier this week, I finally got to use the outdoor hitching posts as opposed to taking Sierra into the barn, and I got on in my same ol' Drill Sargent mode and once reaching my breaking point I broke to walk, went to the buckle, kicked my feet out of my stirrups, and began adding up the value of my horsey-things, and the debts I could pay off if I sold it all and gave up.  Once I went through the motions of feeling sorry for myself, I began retracing my steps to determine where things went sideways and it was during this reflection that I determined that because the horse show didn't go how I envisioned, despite being happy when I got off, I changed my expectation in the days to follow -- I reverted back to overlooking my love for the training and became momentarily consumed with ribbons and appearances.. So with that, I concluded that if I couldn't change my attitude, I wasn't riding in the show on March 30th. 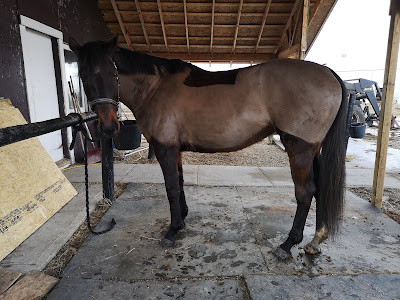 March 29th rolled around, and I still had no idea if I was going to take Sierra to the show.  I decided to go to the barn after work and ride like usual, and upon sight of my trailer Sierra got quite amped up.  I did my best to keep my cool and treat it like an average day, but after a 45 minute ride in the ring, I felt like we weren't getting anywhere and I still hadn't decided on attending the show.  I got off, stripped my tack off and turned Sierra loose to burn some energy and do some ground work.  She immediately wanted to run and gallop around like a goof ball, but once she began to settle, we did some free lunging and ended with yielding her shoulders and hind quarters around.  I decided to end things with a bare back halter ride to cool out.  As I wandered around the arena, I concluded I was going to load Sierra up and take her to the show for a second round of educational humiliation.