The Woes of Horses

October 30, 2018
While I have a few drafts started on various topics, I've decided to update my blog for the sake of having something to look back on.  The angel on my shoulder says in doing so, I can look back on where we 'were' and laugh at the struggles - while the devil on my opposing shoulder says "document the struggles so you appreciate how minor they are when sh!t really hits the fan!".. joys!

As previously mentioned, I lent Sierra out to a friend for a lesson which went horribly, horribly wrong.  Since then, I have been having some issues with her myself (although not to that magnitude - not even close!) that has left me frustrated and throwing a hissy fit in a corner on various occasions.  At this point, I think I have narrowed it down to knowing that although I've only had Sierra a short period of time, this behavior is so uncharacteristic for her.  If I were on the ground evaluating the symptoms, I would recognize that all signs point to a horse in pain and upon discovering swelling from pressure points caused by my saddle, I have backed off significantly until we can get it rectified. 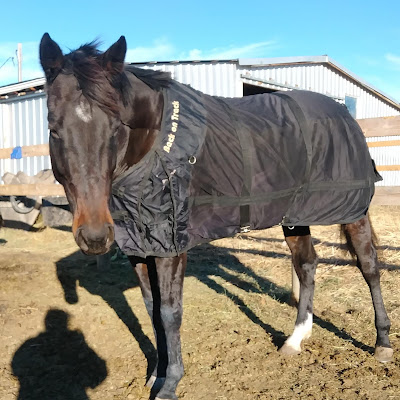 When I bought Sierra, she was in fantastic shape and had a very smooth, muscular top line however she has since lost a large portion of it and developed the infamous 'pocket' be hind her scapula due to lack of riding.  As a result my saddle is no longer fitting as well as it should with my current pad set-up.  Due to the uneven pressure, it was leaving swollen points from poor weight distribution and her loin also became sore.  It took a day or so to show up to palpation, but when I touched the 'right spot' in the cross ties one day she promptly dropped her back, swung her bum towards me, swished her tail and tossed her head as a serious 'i'll kill you' threat that she has never, ever done before and it stopped my dead in my tracks as I shamefully muttered 'stupid horse' under my breath.


Between the evident soreness and her requirement to make me feel incredibly guilty for putting her in a crappy situation, I took a friends advice and decided to just give her some time off - however it's not in my nature to kick a horse out for a week then bring them back in and get back to the grind.. I did give Sierra 1 day to just 'be alone' in her paddock, but every day I made a point of bringing her into the cross ties and grooming her, letting her loose to clean up the precious alfalfa flowers around the hay pile, go for hand walks, and a few stretchy lunge sessions with some pole work.  I've also followed her strict advice to 'feed her way too many cookies', something I typically don't do as she gets very annoying and mouthy, but I obeyed my wise friend and have made sure to spoil her the past few days.  I also took advantage of the time to clip her a little more. While I had taken her chest and windpipe off, she was still drenched in sweat within 25 minutes on a 'good day', so I caved and gave her a Chaser clip.  She's still getting relatively sweaty in the lunge sessions I've done, but it's significantly improved - good, because I refuse to take any more hair off of her!

The weather is officially turning (boooo) and Winter is right around the corner (literally calling for snow tomorrow and sub-zero temps the rest of the week), so Sierra will be moving to my friends sometime this week.  With the clock rolling back this coming weekend, my daylight will be even more limited than it already is, so this is the best for all of us I think. At the new place, she will have a nice large paddock, shelter, heated tack area and access to a small, but quiet indoor where it will just be myself and her, as well as her (adult) kids who ride on occasion. It's not heated, so I really don't know how much I will be able to ride this winter but it's something and I look forward to the change and getting back to the grind once we can get passed this saddle fit and sore back problem!  I hope to do 3 short rides per week, but that may vary based on temperatures as I refuse to ride if it's colder than -20C.  While I grew up in an unheated indoor where we bundled up and used Quarter Sheets, I have been spoiled in recent years with a nice big, heated boarding facility.. so Sierra and I will be roughin' it this winter! 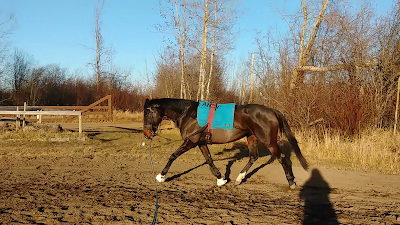 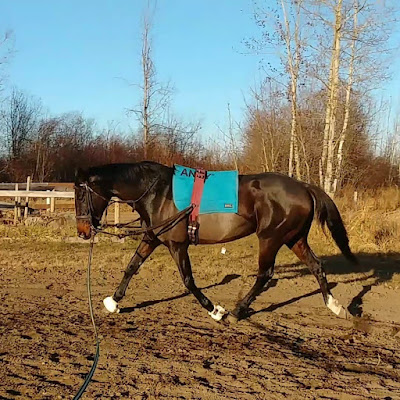