September 04, 2018
In my last post, I discussed my issues on my first attempt at riding my tests for the August Fairview Sport Horse Society Online Dressage Show, but decided to try re-riding the tests the following day and it went much better.  While I know that in the event of a 'real show' you have to ride the horse you were given, and that is precisely why I chose to ride in these Online Shows rather than in real ones, besides the fact that finances are tight and they are far more affordable.. Right now, I don't know Sierra well enough to know what kind of horse I will have on any given day, and until she and I develop our relationship a little further, I am totally content with riding tests in my own yard.

For the August show - we had two judges.  Each judge scored the tests individually and provided feedback to the rider so competitors received twice the amount of feedback.  I am one of the judges and therefor as a rider I only received scores and information from my fellow judge, S. Shannon.  "S" is a Para Dressage Rider from North Eastern Alberta, and is very knowledgeable and an absolute doll so I'm grateful for the time she took to review my tests, along with the other riders!

Test 1 resembled some similarities to the day before, but I chose to remain calm and do my best to reassure Sierra in her moments of tension. I told myself if nothing else, I know *I* could be better than I was the day before. I had decided before riding my tests that I wanted at least 60%; for our first attempt at riding tests I would be happy with it, come what may though traditionally I aim for 65% on the 'low end'. Test 1 had some bobbles where our lack of straightness showed, as did our desire to step to the right in the halt (possibly because of me - to be addressed), and the reoccurring tension in the trot and canter work.  Regardless, I pushed on and we came out with a relatively respectable score of 61.739%.  I thought some scores and comments were generous, but I also realize I'm my own worst critic and I feel as  though I don't deserve nice things - but either way, I was really happy (despite that final halt where I chose to school it a bit rather than allow it).  Some scores were low due to my hubby's inability to film corners while reading at the same time (bless his heart), but that was completely fair and warranted. 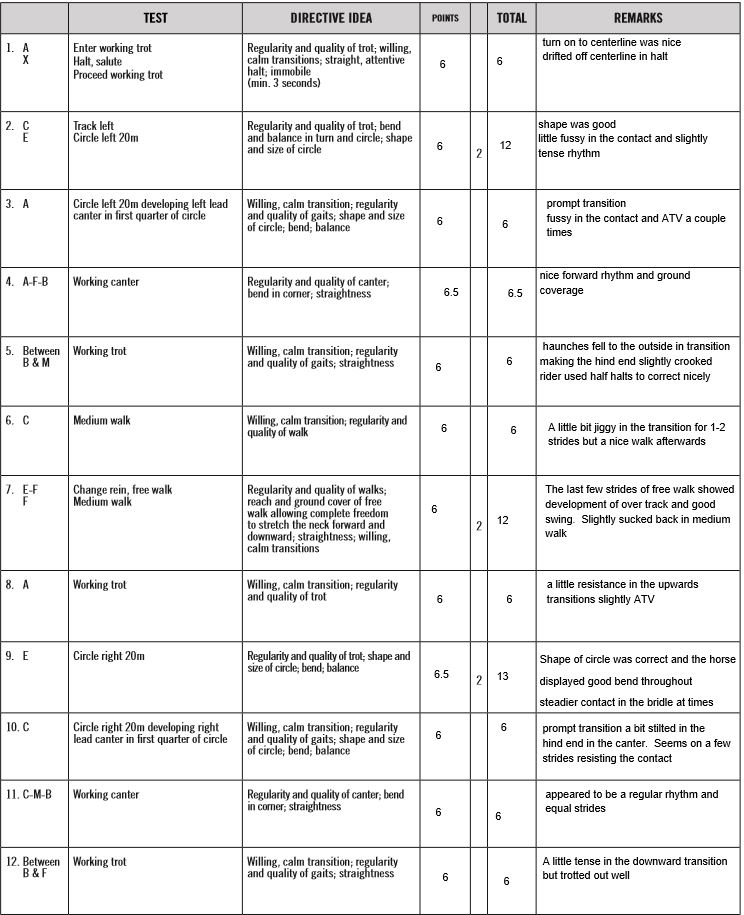 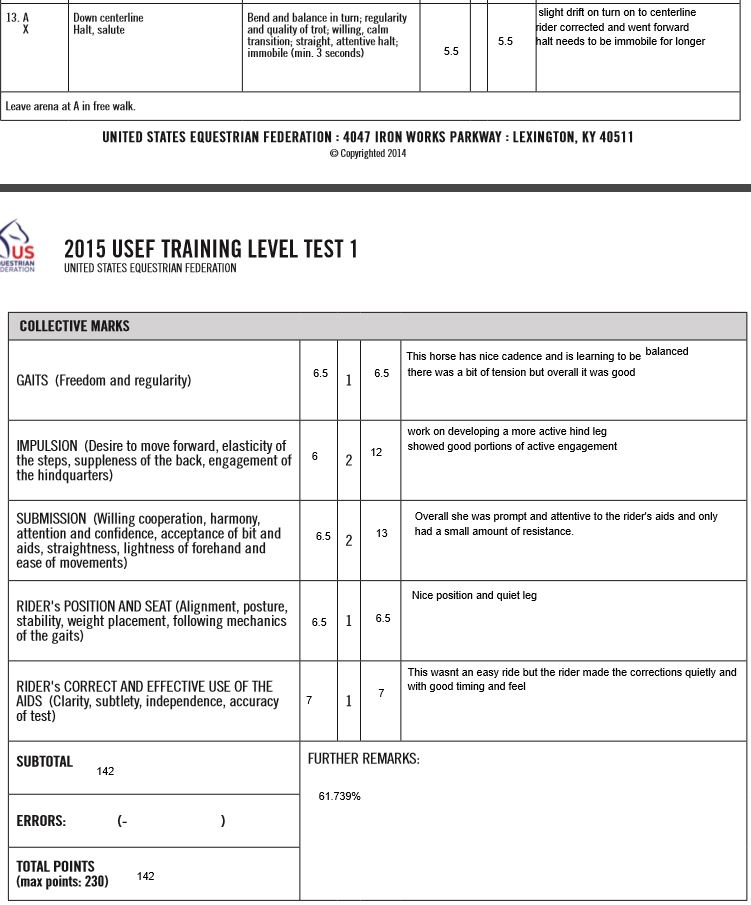 I chose to ride Test 2 once Hubby finished trying to find a better way to film and read at the same time (it didn't happen), but this time he was much better about filming the corners.  I was really happy with my Test 2, and even felt like I may have surpassed 65%+.  My left Canter depart felt fabulous (huge excitement due to having lead issues) and for a horse who could barely walk when I bought her, her free walk is really coming along nicely.  I wound up pulling a 64.423% and although it's a bit lower than I expected, I'm thrilled with it and know that we are capable of consistently scoring around 64 - 66 % with a few adjustments.  There are two scores that from a judges view I felt were perhaps a bit low, or at least if I didn't know 'this' horse/rider and I was judging these tests my scores would have been 0.5 - 1.0 point higher, but regardless I'm really happy with how things went and love all S's advice! 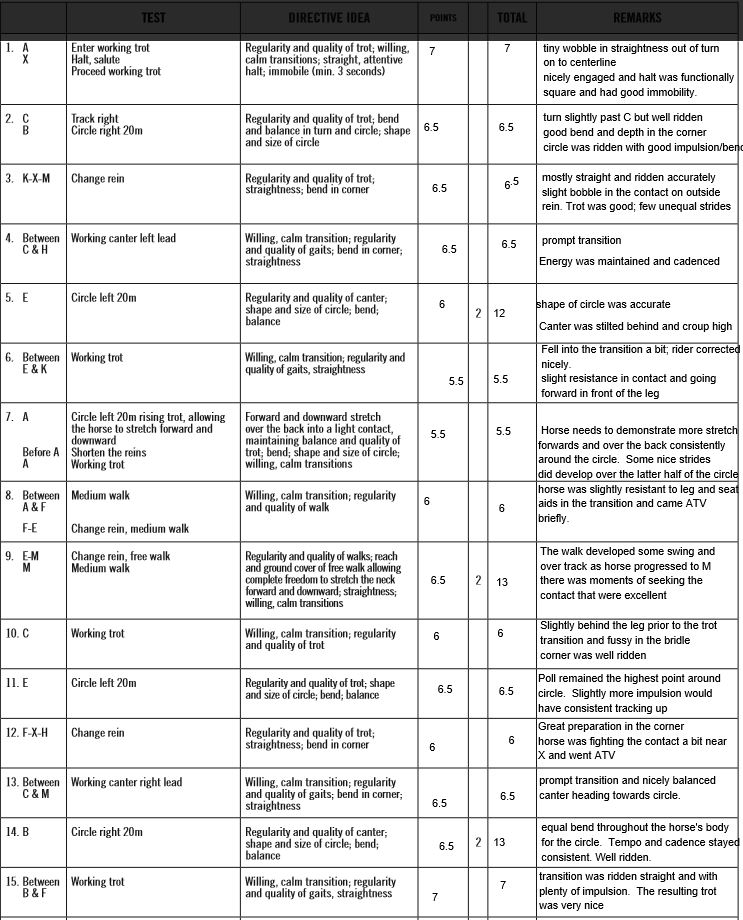 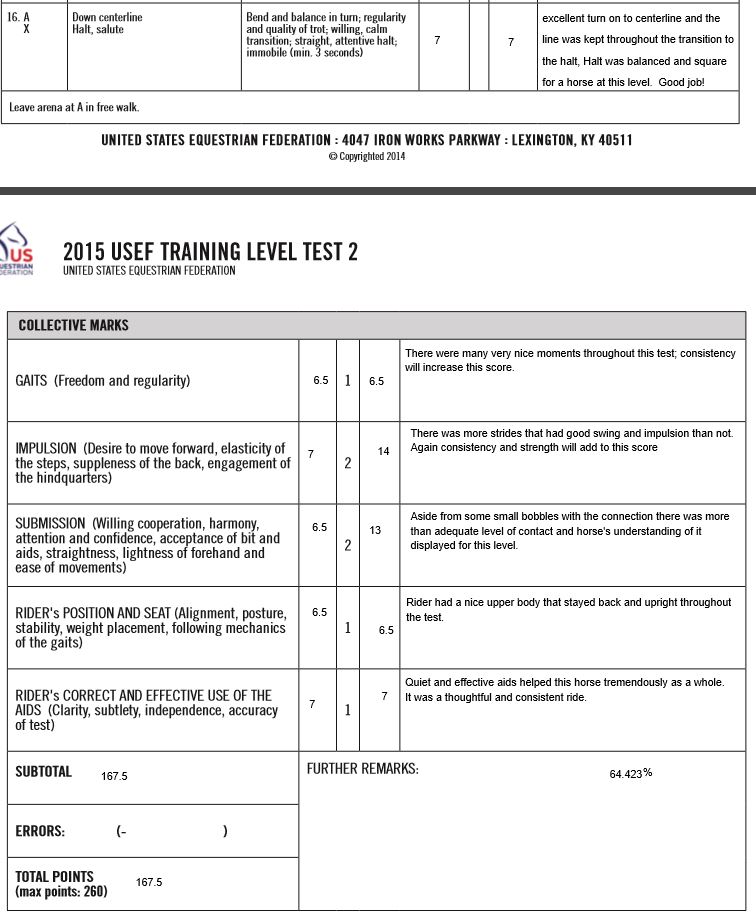 I was so happy with Test 2 that I chose not to ride Test 3. I could tell I was losing Sierra as she was becoming tired, and I really wanted to end things on a great note. I told myself horsemanship always needed to come first, regardless of how elated I was.

I wound up with an average score of 63.081% - good enough for Reserve Champion of the division. While there was only 3 in the Training Level Division, I am grateful and thrilled with the experience and perhaps more importantly than the score, I feel like I learned so much more about Sierra in this entire experience, from the first (failed) attempt to finding some success on Day 2.  Some areas that are lacking in training were blatantly obvious, and I came away from this show with even more knowledge than I went in with.

I value S's feedback but for sake of training my eye from a judges prospective as well as getting better as a rider and improving my horse I have also sent these tests to a recent clinician I rode with and offered to pay her to judge them as well.  Her scores wont have anything to do with the online show, but for educational sake I am looking forward to her opinion and seeing the differences. I have also reached out to one other clinician and and she has agreed to judge them/provide feedback as well, but I will save those for a different post.  I do not have access to regular coaching so this is the next best thing!

We have lots to work on but overall I'm ecstatic with the opportunity to learn so much about Sierra and start dipping my toes back into the waters of competition.  I'm incredibly curious what the additional scoring(s) will show and though Winter is knocking on the door dangerously early, i'm excited to continue learning with Sierra and hope to see some improvement in the September Online Show!