August 27, 2018
I decided to go out on a whim and bomb through some Training Level Tests on Sierra for our Sport Horse Club's Online Dressage Show.  As the president and founder, we've been running Online Dressage Shows since July.  They're a great fundraiser for our club, plus riders are eligible for High Point awards!

I had only ridden 2  times since we got home from Vacation, bringing my total rides to a whopping 3 in the past 7 weeks.  On top of that, I haven't ever practiced most of the movements required for the Training Level Tests; heck we've never ridden a corner, centerline or halt to trot transition.. and I took Sierra's general good nature and willingness for granted and completely dropped the ball... but if at first you don't succeed - try, try again... right?

I developed a fairly bad cold on Monday, but had previously arranged with friends/boarders to ride tests on Wednesday; before the impending week of rain.. so despite staying home from work on Tuesday & Wednesday to rest, I decided to venture my sick-butt across the yard on Wednesday afternoon to bring Sierra in and get her braided and ready.  The girls wouldn't be able to arrive until 6:30 or 7:00, but I wanted to play with her mane to determine how many braids look best, and then turn her back out for a bit.  I really wasn't sure how she would be to 'show prep', and though she started to get a little impatient towards the end, she was quite well behaved.

I took my time to curry and brush her thoroughly, trimmed her tail, braided her mane and forelock, then rolled it into 10 surprisingly well-done buttons. Her forelock was most certainly the worst braided forelock I've ever done, but I didn't care.. It was an online show where even show attire isn't required and to be honest - I rarely braided Kidd's forelock so I certainly need to practice it more.. but given the puddle of sweat at my feet after I finished braiding, I decided to throw Sierra some hay and head back inside and put my feet up for a bit and wait for the girls to arrive.. That's one way to sweat a cold out, right?

Upon the arrival of C and S, I brought Sierra into the cross ties and felt the anxiety rise in my chest.  Earlier when I was braiding her, she seemed a little off - grumpy; very unlike herself.. but regardless I pushed on and tacked up.  It was very windy and the weather had changed; it was only about 10 degrees celcius, and though we looked tidy and fancy, it was all wrong.

C had decided to ride the Walk/Trot Tests on her young 4 year old who just recovered from an injury, and has been feeling fresh in a paddock for the past 6 weeks.  She did her usual ground work before getting on, and not only did he get away from her once and run back to his paddock, he got loose a second time and went for a gallop and a buck through the hay field.  My retired race horse loved it... but alas, she got him back and I got on and did my warm up. Sierra seemed more tense than usual,  but I chocked it up to a variety of things... weather change, temperature, loose and worried youngster, windy, flies buzzing around, dressage perimeter being set up, and about a dozen other things. 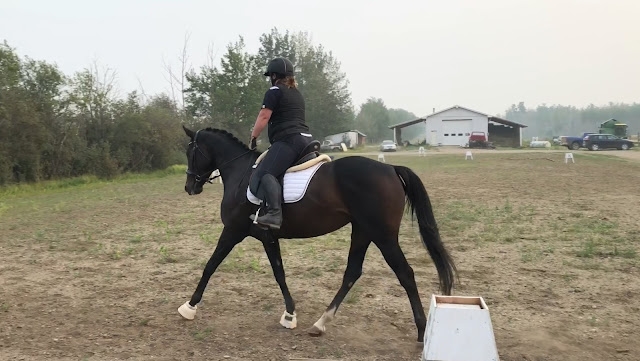 My warm up went fairly well, and I focused on my Circles at E & B, centerlines, halt to trots, corners and things slowly started to degrade.  I was confused and frustrated with Sierras tension - so much so that she nearly looked lame at the trot.  Every corner was bolty, every center line was overshot, every circle was oddly shaped, and every canter depart ended up on the wrong lead.  It was atrocious, and I was so incredibly upset, as was she.  I attempted to ride TL-1, TL-2 and TL-3; but half way through TL-3 I retired when Sierra promptly considered dumping me in the right lead canter circle.. things weren't right, and I wasn't sure why.

At that point, due to the weather, I wasn't sure if I would be able to take a second stab at the tests, as I didn't feel they were an accurate representation of even a 'below average' ride. Sierra had never acted like that before, and when I saw the video the next day (it was on a friends phone), I realized I was also very 'different'... and I started to come to the conclusion that things were about 90% my fault, or greater.

Sierra is a thoroughbred, but in a lot of ways she is the least thoroughbredy-throroughbred I think I've ever encountered.. though some breed characteristics ring true, most do not.. but as Janine Little said in the clinic I audited, "All horses have a tendency, and they will always revert back to it when things get tough".  Most Thoroughbreds have a variety of tendencies, but 9 times out of 10 one is always Tension.. and Sierra is one of those Thoroughbreds.. but unlike many, she's very forgiving and reactive to me, both negatively and positively.  I decided to get off rather than push through it. I don't know her well enough and I wanted to give her the benefit of the doubt considering she was exhibiting some pain response type behaviors.. Tomorrow was a new day.

Tomorrow came and the weather was dreary, cold and damp - even worse than the day before.  It wasn't raining, but it was consistently 'misting', something I don't know that I have ever experienced since moving to Alberta.  While it's typical in my hometown and it's surrounding areas in British Columbia, the climate tends to be much more dry here.  Regardless, I chose to ride anyway.  I had done a lot of thinking throughout the day after watching the videos, and chose to take a long warm up at the walk to do some more thinking about our ride the day before.  As soon as I got on, Sierra took a few steps forward - odd.. normally she stands stock still.  I corrected her, then asked her to walk on. Her back instantly seized up and I glanced back to see if she was pooping; nope.. She felt like Kidd tends to when you first get on.. cold backed and very tight.  I decided to take my best friends advice after watching the videos, where she quickly pointed out I did not pet her once.. so I gave her a pat and continued to walk around the perimeter at the buckle, encouraging her to stretch.  Half way through our first lap I felt her back relax and she began striding as normal.  I sighed a sigh of relief; my horse was coming back to me.  As I pushed her into a corner, I felt the tension return and it sunk in.. I created most of the tension the day before by going into 'show mode' and changing myself, along with everything else around us, and all that was familiar to Sierra was gone out the window. Not only had things changed abruptly, I wasn't there for her when she needed the support.  So, I took a breath and rubbed either side of her neck with both hands, and continued onto my warm up and made an effort to be better than I was the day before.  I rewarded her often, and worked hard to be softer and more like myself. Like Horses reverting back, I also reverted back to my 'old habits', and Sierra became frazzled and worried.  She needed me, and I reverted back to a tight, hard handed perfectionist who couldn't ride effectively to safe my life.  I wasn't supportive in any way, shape or form - physically or emotionally, and Sierra got lost and frustrated.
I chose to re-ride my tests, but opted to only do Test 1 and 2.  All three seemed like a stretch, and after my final salute in Test 2 Sierra hadn't taken one incorrect lead. I took that for a win in itself, and called it a day. Our Test 1 was still sub-par, but everything was a vast improvement from the day before, and I was incredibly happy with Test 2.  I set out with the goal of riding as I * should *, not how I rode the day before, and if we still scored poorly I could accept it.  I was dedicated to riding the sequence of movements as the test called for and to the best of my current ability.  I knew Sierra needed to take some responsibility to meet me in the middle, and in most ways she did, but I had to take the initiative to show her a better way of going.  I still have some awfully horrible and 'backwards' habits that need to be addressed, but every day I become more aware - and every day I learn more about Sierra.  Though some frustrating lessons were had, Janine's words rung true in my head on Day 2... Tension Breeds Tension, and in order to improve I needed to rid myself of it!

I will be posting the full recap & results on the Show in another post!