August 16, 2018
Looking back at my Equilab Tracker, until August 12 I had ridden once in 7 weeks. Between work, haying, farming, and vacation Sierra has had a long hiatus, and after a much needed vaycay I was excited to get home and get back on my pony.

With the Online Dressage Show coming up (Deadline Aug 24, go Enter!!) I decided to bomb through some tests just to get a baseline and some feedback, which means I need to actually ride if I want a semi-decent score.  I'm one of two judges and therefor i'll only get a score from the other judge but i'm okay with that as my purpose isn't to try and win.

Yesterday I was about to get on and one of my friends/boarders arrived to see her horse and offered to take some video for me.  I haven't had any video other than the video from our Dressage Clinic back in June in literally like, years, and after watching the video from my ride yesterday I have some * serious * work to do.  On the plus side, we have been having some issues with our leads and after watching the video's, I am confident that it's 90% my fault and now I can work better to improve things.  With the pain of Kidd's retirement still raw, I was worried that her lead problems meant something was wrong.
Having barely ridden the past 2 years or so really takes it's toll on a body and your natural feel.  Lately I feel quite foreign on a horse and my fluidity is all but gone.  At some point I developed a habit of riding 'backward' in the sense that I seem to pull back rather than push forward, and my hands have gotten jiggly.  I also noticed my leg swinging a bit in the Canter, and my infamous wandering hand has returned with a vengeance... but at least now I'm more aware of it, and can work to improve things.

After each ride, I have a routine of brushing, massaging, stretching and liniment to the neck, shoulder, back, hind quarters and major joints and tendons of the legs... but being so out of shape, I have taken to also putting liniment on myself after each ride (seriously) and doing some stretches. 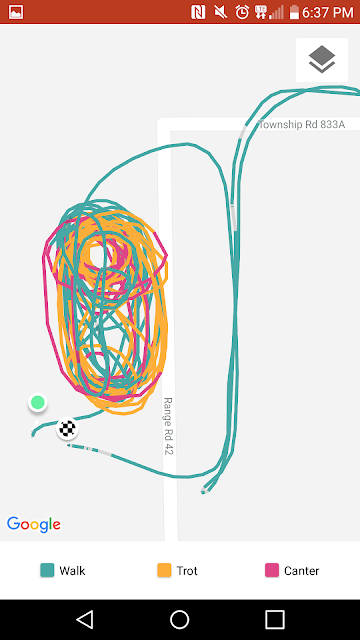