July 10, 2018
I have officially owned Sierra for 1 month (and 1 day, but that seems ridiculous to state) and we accomplished a lot early on, but i'm sad to say due to weather, working full time and haying/farming, she has 'sat' for nearly 3 weeks!  However, we have done a little so i'll focus on those for now... but if that isn't bad enough, I have 2 trips planned that will put me away more than home for the next month, which means the hours spent in the saddle won't be changing a whole lot.  At the end of the day, I swore I wouldn't 'baby' my new horse like I did so much with Kidd, and I really wanted a horse I could leave for a week and hop on without any trouble, so I guess if nothing else we will be putting that to the test.

Over the past 2.5 weeks, Sierra spent most of her time in her paddock.  Following the clinic, it was blistering hot for 3 days.  While those in the lower-48 may laugh, up here in North Western Canada we are really not acclimatized to 35C degrees (95F), and melt into a puddle of nakedness with no desire to live.  Following the break in the heat, our Sport Horse Club was hosting a Jumping Event which, as the President, I had an obligation to be present for.  Following that, we had 10 days of straight rain.. I began to forget what the sun felt like, but as the monsoon finally came to an end, haying season was upon us.. and remains.

Though I haven't spent much time in the saddle since the clinic, I did take her out for a few hand walks and grooming sessions, and one trip to the local indoor to see the Osteopath.  She had never been to this indoor arena, and hasn't been in a trailer since the long haul home when I purchased her.  I wasn't really sure what to expect, but was really happy when she toodled onto the trailer without any hesitation except to say 'who's this guy' in the stall next to her who was loaded first.  Once at the arena, other than impatiently pry for treats and paw when I wasn't within pocket-searching distance, she was fabulous.  After her treatment, I turned her lose in the arena expecting her to roar around and she quietly meandered around the arena, checking out the scary corners with 0 interest despite the wind howling through the barn. She was loose 45 minutes and never progressed beyond a walk.  Damn, I was impressed and wished I had brought my tack. 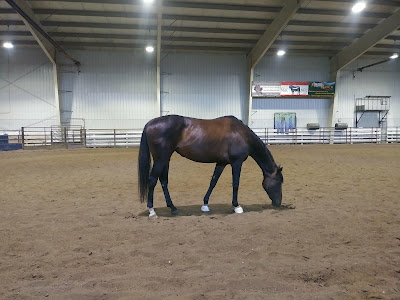 The Osteopath who worked on Sierra was the same one who told me at 4 years old that Kidd would have stifle issues.  I held my breath for most of the appointment, expecting her to point out her hocks, which aren't 100% clean on x-rays, but much to my surprise - she didn't.  She said her back felt fantastic for an OTTB and Eventer/Jumper and she had great movements in her pelvis.  Her biggest concern was her neck and poll, which wasn't much surprise to me, especially after spending the entire clinic I took a few weeks prior working on softening her neck and pressing FOR the contact, not just tucking her nose and 'doing the things'.  She gave me some exercises to work on, mostly one I refer to as "the snake-bite thing" to massage her nuchal ligament and the muscles along the top of her neck and recommended lots of stretching and backing up slowly with her head as low as possible to engage her back.  Overall she was really happy with the shape she was in, and we discussed her weight (which I will talk about in another post as I hope to have an exciting 'before and after') and I explained it was a work in progress.  She has lost significant condition since I purchased her, mainly because she's not being ridden like she was before, but the Osteopath felt it may be a good thing.  She has been in full time training so deserved some time off for starters, but also this will allow her muscles to 'reset' so to speak, as many were built up incorrectly.  Regardless, she HAS dropped weight along with muscle and we are working on improving it. 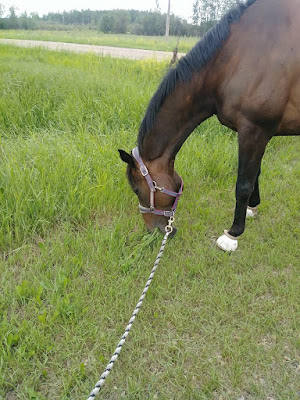 Yesterday I lunged Sierra for the first time ever, and while I don't get the impression she has lunged a whole lot in her life, I spent most of the time flying a 1,000lb kite who was STOKED to be out of her paddock.  Regardless, I am not one of those 'awww she's feelin' good, wahoo!' people - IMPO, it's disrespectful behavior regardless of the cause and i'm not interested in entertaining it. I did my best to reprimand her naughtiness, but also chuckled in my head at her silliness.  I have never seen the 'half-dead-to-the-world Sierra' that I looked at and ultimately purchased, which still has me curious, but regardless I am still really happy with her and i'm looking forward to our future together and, yanno... actually being able to ride regularly.

There is a show July 27 - 29 and despite going out of town on Vacation for 2.5 weeks on the 28th, I considered taking her on the 27th for the Dressage just to get a 'baseline', however with how little I have been riding, it's no longer on my radar.  Our Sport Horse Club is doing a series of Online Dressage Shows, so I think I will sink my focus on that once I return from vacation.

In terms of training, I would really like to set the goal to, at SOME POINT when life calms down, ride 12 Days of Long & Low/Stretching.  She has no idea how to stretch, at least not properly, and a lot of time can be spent at walk working on these things with her. Kidd had an 8+ Free Walk that I developed from a shuffling pony thing that resembled a toddler learning to walk, and I know once she learns to use her topline I can get her there. The stretchy work will help her in all aspects of her training; mainly using her topline, letting go of tension, and understanding contact.