December 18, 2017
Week 3 has come and gone, and I considered skipping this blog post, but my COD (OCD in Alphabetical Order, gaaahd keep up) will twinge in the back of my head... but on that note, you can imagine it was a pretty uneventful week because the inevitable finally happened.. Kai was mysteriously hurt again.
Upon discovering  her swollen hind legs on Tuesday  afternoon, I decided to  turn her loose in the arena to check for soundness.  Luckily, she was sound and after running around the swelling came down but it was still really hot.  I decided to cold hose her legs, and the swelling continued to subside. I took a risk, and didn't wrap or Bute her before turning her back out.  I was optimistic she would be 'fine' on Wednesday and was hoping it was just due to to standing around too much, or maybe too much Alfalfa.  I hung on the fact she seemed perfectly sound and 'normal', before heading home to look forward to the next day.

Unfortunately on Wednesday her legs were swollen again, yet she was still sound. I did note they weren't quite as swollen as the day before and she continued to seem 'normal' so I took the quiet barn as an opportunity to explore every crack and corner of the arena with Kai.  After letting her run around in the arena, I haltered her and took her to the West End where the obstacle/barrel/jump storage is, the tractor is parked, and the scary roping boxes are located.  While the colourful storage area hasn't been much cause for concern, the rope boxes are.  Given that no one was in the arena, I opened the gates and took her into them.  At first, she flew backwards and leaped sideways multiple times with the 'I SIMPLY CAN NOT' look she gives me on a regular basis. Alas, I lunged her around, reprimanded her naughtiness and marched back towards the rope boxes.  She was hesitant, but with the encouragement of a lunge whip in extension of my arm, she continued to move forward; one step at a time.  Eventually, we were able to calmly stand in both rope boxes and walk out without bolting away. Success.

From there, we walked down the scary South Wall/Cattle Alley.  This Wall is the biggest problem for her, yet today she hardly even looked at it.  Perhaps she was still worried about the Rope Boxes, or perhaps she was just glad to be done with them.

We walked down the south wall towards the Stripping Chute/Farrier Corner, also a source for problems.  She bawked, but I walked her straight through the gate and into the farrier corner, which is subsequently the backside of the stripping chute.. Once she willingly stood calmly in here, I took her back into the arena and she was much less concerned about the scary corner, though still kept a watchful eye for the monsters that she is certain lurk in the shadows.  Once again, walking away from this corner she didn't bolt. #Winning. 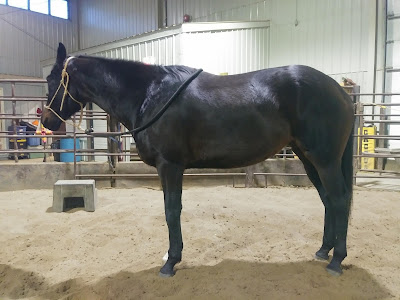 I then took her to the mounting block and leaned across her back.  As I did so, she pinned her ears and tossed her head, threatening to nip my leg.  I reprimanded her, and worked through the exercise at task. Her attitude subsided, but she still seemed annoyed.  However, once satisfied with her patients I patted her and put the mounting block away.

From there, we checked out the Theraplate. I figured this would be interesting. The way it's set up, she can't walk straight through; she has to walk into a 'chute' and then back off of it.  As to not alarm her and cause a wreck at this funny, ticklish feeling in her feet, I turned it on first and let her hear it.  We started with one foot, then eventually graduated to all 4.  When ever I adjusted the speed, she would back off. I discouraged her, mostly because she continued to move backwards despite pressure from me on the lead rope, but was glad she wasn't leaping forward into a locked gate.  Eventually, I was able to turn it up and down without her wiggling around or trying to exit stage backwards. 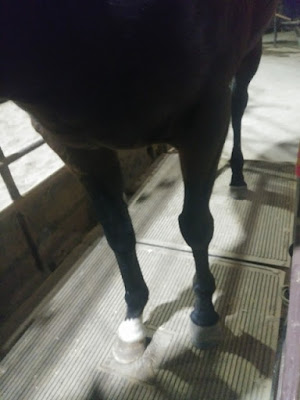 For sake of not delving into my 'private life', things at work have gone haywire right now which has left me feeling exhausted, unmotivated, and craving isolation outside the hours of 8:30 - 3:30, so Thursday I skipped the barn, and Friday/Saturday I had Christmas Parties to attend so I knew the weekend was a write off.  I forced myself to go to the barn on Friday before getting ready for Christmas party #2 and I unwrapped Kai to find her legs cold and tight, so I left her and will check back today.

At this point I think it is most likely she slipped on the ice and over extended herself given that her back was also sore.  Here's to hoping things are looking 'normal' today!

In other news, Hubby's new horse Banker came home yesterday (Sunday), and we look forward to working with him when the weather smartens up. Though it's been incredibly warm, that means my entire yard is a skating rink!
I don't know if there will be another post before Christmas as my holiday break starts later this week (thank gaaaahhhd) and i'm dying to feel 0 obligation for at least a few days, so if I don't post again before then - MERRY CHRISTMAS & HAPPY NEW YEAR!