An update from an igloo, somewhere north of the boarder.

November 14, 2017
Where to begin... Many things in my life may be changing and i'm reluctant to announce them just yet, so I will start with a Kai update, followed by some vague statements.

When I last wrote, Kai and I had enjoyed 5 fabulous rides together, followed by a Chiropractor appointment.  We learned her entire body was locked in a curve to the left, and her SI's were incredibly 'out' and sore.  She was miserable during the adjustment, which has been the case for every Chiropractor appointment she has had thus far.  A week later, I had a beautiful soul who we will call "L" come out and work on Kai.  I have issues with my lower back, and whatever voodo magic she does to it works WONDERS and doesn't even hold a candle to anything else I have had done (Chiro, Acupuncture, etc) and she works on horses as well. I've never had her work on a horse, and now i'm wondering why I haven't utilized her for my horses in the past.  If you get the heebeegeebee's about Reiki, animal communication and energy work, skip past this part.

"L" immediately gravitated towards her left stifle, the one she previously injured in the summer, and then moved to her SI's and hips, then her ribs. As she worked over these areas, Kai drifted off into sleep, with the odd protest towards heavier pressure, but still nothing like she has in the past with other people working on her.  Initially she threatened to kick a few times, but "L" assured her she was going to feel much better after, and she quickly gave up.  As she worked over her, Kai continued to doze off and come in and out of different levels of alertness, but all the while she was completely relaxed and calm.  Once she got to her ribs, Kai was much more alert and as "L" continued to whisper things to her, she held on tightly to the fear and aggression she has previously shown when in discomfort during body work sessions, but eventually did relax and release.   She then worked on her chest and poll. Following the 45 minutes she spent working on Kai, we chatted about her findings. 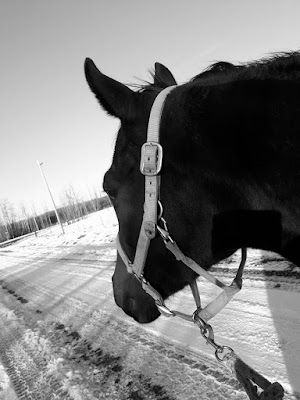 "L" feels as though she has a lot of pent up emotions, and she's holding most of them in her rib cage and chest.  She alluded to a girl with long hair kicking her repeatedly in the ribs on the left side and she wasn't sure why, but feels as though Kai has really held onto that and is overly protective of her left side of her body.  Rather than be sensitive to pressure on the left, she pushes against it - which is true and something I have mentioned previously when it comes to left leg pressure.  She then dove into the heart of the problems. She advised me that Kai feels as though she was cast aside, and that she thought she was doing the right thing and doesn't understand why she wasn't good enough in her previous home.  I absorbed all this information as "L" shifted into a general overview of her feelings towards Kai, and said that she is reluctant to trust people given her emotional baggage, but she feels that once Kai does fully trust me, she will be the type of horse to give me 110% every single time.  I see this in Kai, and do agree with her. 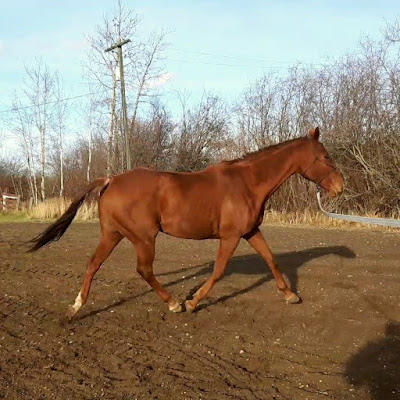 The following week it warmed up a little and was only about -8C so I decided to get Kai some exercise and hopefully ride her.  I tacked her up like usual - her loose in the round pen and me just hoping she will choose to stay with me.  She moved away once, but then stood.  I finished tacking her up, and sent her out on the rail.  Given the ground, she could only safely trot one half of the round pen circle, so we kept it simple.  While I moved her around this way and that, I kept my hand wrapped around the bit and shoved in my pocket.  Once I felt she had relaxed and became a little more in-tune to me, I bridled her. I noticed right away she seemed overly sensitive to the bit. Maybe it was still cold? I couldn't tell.  I took note of the snarled nostrils and her tossing her head when I gave her a reassuring pat, and swung a leg over.  I asked her to move on, and she was reluctant like usual but went.  She seemed to be off in another world, so I decided to do some walk/halt transitions. Big mistake. The second she felt the pressure on the bit, she felt like she wanted to rear.  I shrugged it off - she hadn't been ridden in a while, she's just being a jerk, right?  I asked her to walk on, and after 4 or 5 strides asked for another halt and I was met, once again, with the blatant "F U" statement.  I petted her as she danced, and dismounted, feeling defeated.  What the heck was going on?  I stared at her snarly little nostrils, and then the light hit her just right.  Her nose was swollen. I looked all over for a cut or mark, but couldn't not find one.  Any time I touched her nose, she got incredibly upset with me. I tried to flip her lip to ensure there was nothing under her lip that was causing the swelling, but she wasn't having any of it.  I felt slightly better knowing there was a legitimate reason behind her behavior, and untacked her.  Still though, she trotted off to the opposite side of the round pen the second she was released from me, and I was left feeling a little empty.. I reminded myself the Vet was due in a few days, and that we could re evaluate then.

The Vet came as planned and floated Kai's teeth, and did her coggins and vaccines in anticipation of me taking her to the indoor to board at for the month of December.  She examined her nose thoroughly and couldn't pin point the problem beyond what looked like a very small cut and thinks she had been rubbing it and irritating it more.  Regardless, within a few days, it was back to normal.  She's feeling back to her usual self and is very fresh. I'm contemplating turning her out into the pasture on the round bales, but regardless the girl needs exercise so yesterday I braved the weather and took her out into the large pasture where the cows are, and lunged her to burn off some steam. She was nuts; bucking, crow hopping, squealing and playing like crazy.  I did 'shut her down' to some degree but I was happy to see her feeling so good.  In the days prior, if she didn't have food in front of her and anyone was outside she would weave at the gate - a new 'thing' for her.. I had hoped it was related to her just being full of pent up energy and feeling great after her Vet appointment, energy work and chiropractor appointment, and at this point I think i'm right.  I'm still undecided on of I will turn her out or not, but regardless on the 26th I plan to take her to the local indoor to board for a month.  The girl needs life experience and to just 'see stuff'. Even if it's a month spent doing ground work, it will benefit both of us i'm sure.

In other news, the face of Spotted Dressage may be coming to an end.  Once Kidd's coggins results come in, he will be going out on trial with a very promising new home, and Icy's trial ends next weekend. She was Vetted last week and they have some concerns, so we will see if she comes home or not.  I'm withholding information regarding Kidd's trial for now, but will be certain to report back.  He will be gone for 3 weeks and though it kills me to sell him, I literally couldn't give him away to a better home if this works out for him.
We are also likely bringing Ray's 5 year old home as he's now retired from the race track. 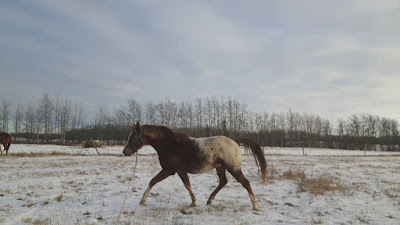