August 15, 2017
Well, just when you think things are turning around, another curve ball comes your way despite feeling like you just barely dodged the last one!  If you ever feel financially stable and need to be reminded what assholes horses can be, just ask to borrow Kai. Seriously, I would be happy to give her away. Hell, I might even pay for your fuel!

On Friday, Kai decided to hell with being locked up, i'm going to bust some fence boards and get out into the large pasture with the herd.  She shared a fence line with the herd of senile old ladies and 1 kind old gent since the late winter, and she said to heck with this, i'm going exploring.  We knew she was out on Friday morning when Hubby went to feed, but she was happily grazing and everyone was getting along so we left her for now.  Kai has never been in a herd - only with 1 horse in her life - and never in a large field, so I have had reservations about turning her out with her past history of continually trying to kill herself, but I decided to leave her, since she seemed fine.

That evening I checked her again, and she was still fine so I said "whew, maybe someone finally threw me a bone!', she was happily out grazing and getting along with everyone.  Finally, my luck has turned.  It's been a whole 12 hours in a new situation, and she hasn't caused me to dig through my vet kit or text more photos to my poor Vet yet again - it's like Christmas in August.  Wrong!

The next morning (Saturday) I was feeding and decided to go see how she fared her first night in the big field with her new buddies.  I drove up on the quad and she perked her ears, gave a little whinny and started walking towards me. Right away, I noticed the back end of her fly sheet was shredded and tangled around one hind leg and partially dragging on the ground. I thought "oh well, cheap fly sheet and at least she didn't panic and run through the wire fence.". I counted my blessings and crawled through the fence to remove it and let her be au-naturale.

As I came around to her off-side shoulder, I stopped dead in my tracks. Frick.

I removed her fly sheet, grabbed the spare halter we tend to keep in the quad in case of emergencies, and started to lead her up to the barn and into the stall. I ran back to the house and grabbed my cell phone and called the Vet. Super. I love to start my Saturday with an after-hours emergency vet visit.

The Vet arrived about 45 minutes after placing the call, and he put in 8 stitches and 2 drains as it was weeping quite heavily.  He didn't think she needed any medication, but I have it on hand in case I decided it was necessary, so we left her and put her back in a paddock. Friend privileges are currently lost... darn teenagers! 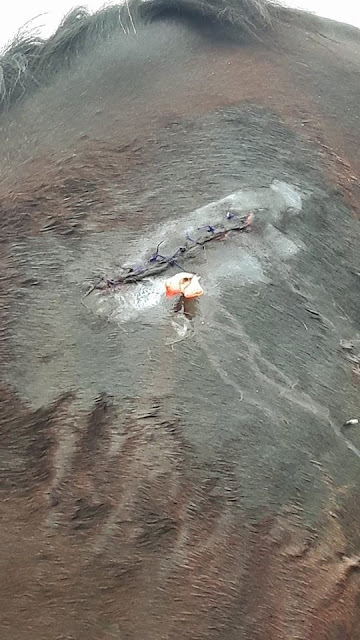 As the vet sutured, we joked back and forth about the pretty ones are always the lemons and I should have noted her multiple scars and old injuries as red flags, given that she was only 3 years old but I was blinded by how cute and well bred she was.  Regardless, my Vet absolutely adores her and so I told her if this keeps up, she's going to live with him.

At this point, the assumption is it was a really bad bite mark. If there is any good news I can shed, it's that the wound literally just happened within an hour as nothing was even dried yet.  The skin was pulled away from the fascia below, and torn quite cleanly.  I'll be honest.. It looked super cool, but man was I frustrated! 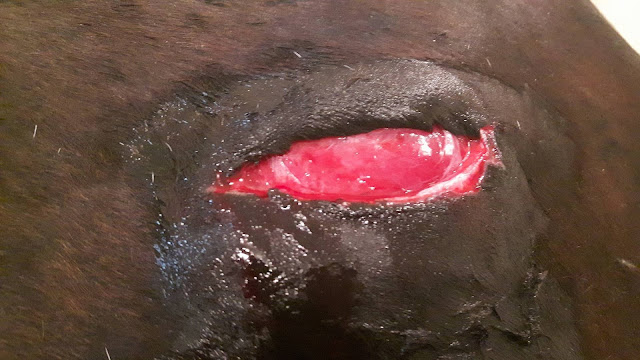 On Sunday I decided to give her some bute, as some fluid had missed the drains and she had some edema in her lower shoulder, and she would barely move as she was so sore.  By Monday her drains had fallen out as the Vet said they might, but she was feeling much better. The fluid had moved further down her leg into her elbow/forearm area.  However, her wound was pretty 'gunky' and man did it smell. I literally soaked my hands in Listerine and still could not remove the smell until I scrubbed down in the shower.. so I opted to give her a shot of Penicillin just in case there was something brewing in there.

Her seroma is significantly smaller now and isn't much bigger than the size of a small orange, but it as turned harder.  The vet checked it again when he was here to stitch her and said it was fine and will just take time to fully go away.

We are moved into our new farm, sort of, now and I was really worried about bringing Kai home because, as previously mentioned, she has never been in a large field or in a herd before. I was going to leave her in my round pen, but is that any life for a horse?  I'm getting close to the point of just saying "yolo" and turning her out and hoping for the best. Honestly, i'm exhausted from all the injuries this horse seems to incur on a regular basis, and i'm getting to the point where, if she kills herself, she kills herself.

Shifting to the "bliss" stage of this post, as previously mentioned, we are more or less moved into our new farm.  I posted about it once ages ago, but it's such a relief to know the entire fiasco is finished. It was truly so stressful and a large part of why I've hardly ridden this year. Between the first mortgage falling through and so many road blocks along the way, we are finally IN and I cant wait to transform the place into something truly fantastic.  I'm sure i'll post more about in the future but for those who may have missed it, our new farm is 161 acres with a shop, small barn, round pen, sand outdoor arena and a small house.  We have been so busy getting the hay crop off and sold and some interior renovations that we have just finally started sleeping there, despite taking possession over 2 weeks ago.. but we're finally in!


I was torn between posting about this next bit, but to save myself from the cliche "meet our new family member" (even though it will probably happen anyway), we may be adding a new/old horse 'back' to our family.

Last Year I sold a home bred mare that my hubby and I took on as a project to a sweet, talented junior.  The mare was a tough sell and I was very particular about the home she would go to, and she spent a little over a year in this lovely girls care.  Unfortunately for Icy, she has been given a great opportunity to travel and doesn't want to leave Icy behind but can't afford to take her with her and as such, she honored our First Right to Refuse deal.  One of my clients was using her for lessons prior to selling her, and she fell in absolute love with her but wasn't prepared to purchase her at the time.  While it's not great timing, the price is right and therefor, we may be coming home from our min-vacay this weekend with a new horse.  Our intention will be to sell her to my previous lesson client when she's prepared to purchase her, or put her back into the lesson string and my hubby can ride/show her in the mean time.  We both agreed that realistically we shouldn't spend the money, but for a homebred at a *steal* of a deal who we both really enjoyed having around, how can we say no..

So, it's not written in stone yet, but don't be surprised if you stumble across this blog in a few weeks and be confused asking where this fiery little red head has come from!?

For now, some photos of her will suffice.  And if I don't end up buying her, she will be listed to the public for anyone who may be interested! 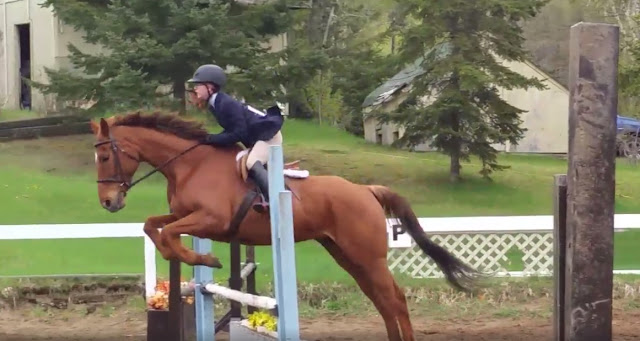