July 20, 2017
I figured I have done plenty of complaining about Nikki lately, and a little complaining and praising of Kidd, but I haven't said much about Kai lately.  Truthfully, there isn't much to tell so this will be a short blog post, but she clearly felt the need to cause me more grief so I figured it was a good excuse to continue my rampage of general complaints.

In May, Kai had her feet trimmed and the short and simple of it was, she became incredibly sensitive.  This carried on for over 3 weeks, and then she strained a suspensory branch, lengthening out her time off even more.  Her suspensory was nearly healed when a small abscess blew out of her frog.  It was assumed to be an abscess that was really high up in her foot from a bruise, that took a long time to blow out.  She continued to be off for a few more days, before Monsoon Part 518 of 2017 hit, causing me to consider building an ark and floating away.  As such, all the pens (including my arena) were essentially pure mud, which is lovely for abscesses (eye roll).. Much to my surprise, Kai was fine and her legs remained cold and tight for about 10 days while we waited out the mud.

This evening, I took Kai into the arena so she could stretch her legs.  I took a lunge whip with me for protection more than anything.  To be honest, I have never been with her while loose in an arena, I have always stood on the outside of the fence except for when I went to catch her.. Call me a pansy, but that girl can run far better than she can stop, and truthfully - I didn't trust her.  Today I let her loose and stood in the center and held the whip upright with the tail still twisted around it, rendering it essentially threat-less..


I'm so happy to say, that after nearly 8 weeks, SHE IS SOUND, though she has lost a shoe in the muck... BUT SOUND!!

She grazed on the grass around the fence line between spurts of galloping, bucking, squealing and playing.  She was so happpy to be out of her muddy paddock.  I decided to play a little with her on the ground, and much to my surprise she locked onto me and free lunged quite nicely for our first 'loose groundwork' session.  I was able to put her through her paces and welcome her up to me at a walk, trot and cater where she quietly stopped and demanded awaited praise.  It was so awesome, even Coral, who was standing by the fence watching, commented "I don't think you're going to have any problems with her, she's totally attached to you" and I can proudly say it's true! I was really surprised how tuned-in she was, and it was a really rewarding feeling!


Coral and I got busy chatting, leaving Kai to her own devices.  She went back to the occasional playing, and grazing under the fence.  During one of her spurts of energy, I stepped back towards the middle of the arena to get out of her way so she could use the fence line rather than have to turn sharp, as the footing in some areas was a little iffy. Coral and I admired her beautiful (and sound) movement as she played around the arena, navigating around the wetter spots. Regardless, she had been running and goofing off for 45 minutes prior without any incident, but it all changed when she went to strike off into a Canter, and all 4 feet went right out from underneath her, and directly under the fence.  It's like my horses think I have endless supply of money, I swear.


I waited for her to scramble up as I didn't want to startle her anymore.  She walked off, and was visibly off on the left hind. GREAT. SERIOUSLY!?  By the end of the arena, she was walking nearly normal again but was clearly rattled.  Coral was hot on my tail with a halter and we caught her and checked her over.  Her right front leg, opposite to the foot that has lost the shoe, she has multiple small surface scrapes from her sharp hoof edges.  Luckily, nothing minor at all.. just hair loss... but her left hind stifle has sustained a clear cut laceration through the skin, exposing the tissue beneath.  Thank goodness she didn't cut herself worse than she did it just 'looks ugly'.


Due to the location, the Vet doesn't feel stitches are a great option and instead has advised me to keep it clean, and pick up some liquid bandaid..  I'm also going to try and find some adhesive tape as well, but we shall see.  The concern is just mostly if it will heal relatively 'clean' or not.  Given that it's right over a fairly active joint, we want to avoid scar tissue as much as possible.

So currently, this is my life.. It's a crappy photo, but I will try for more tomorrow after work. 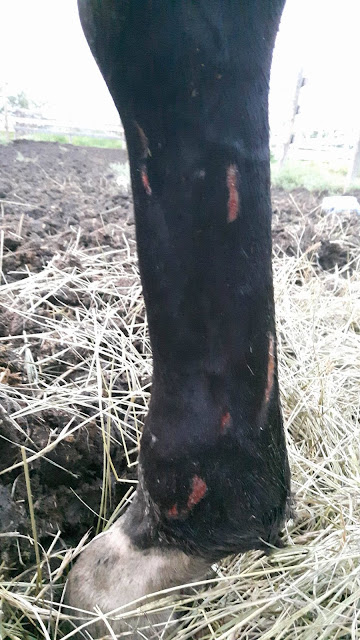