Keep Calm and Canter On

July 06, 2017
After a long day at work, I was impatiently waiting to get home and ride Kidd.  He's had 2.5 weeks off and yesterday Coral brought Hershey out to the farm to board for the summer.  Coral is a close friend, client and supporter.  Both her and I have taken quite a hiatus from riding, and we are ready to motivate each other and get back at it and today was Day #1!  Realistically, that 2.5 weeks off is irrelevant considering before the 3 rides we shared 2.5 weeks ago, I hadn't ridden him since October '16, but that's beside the point.

This spring, I decided this year was just for 'us'; to solidify our love affair and just have FUN. For the past 2 years we have been incredibly focused on competing, and it was driving a stake between Kidd and I.  I wanted to get back to the fun I remember having as a child, when I was carefree and more importantly, anxiety-free.  The break we've taken has been worth every moment and I have found the enjoyment in riding again.. My first ride back on him since October was bareback and it was an absolute blast.  Our second and third ride were filled with a longer, lighter contact and large, loopy figures; simple movements for both of us.

Now that I am motivated and have rediscovered my love for my horse and dressage in general, i'm turning my focus to strengthening Kidd's stifles (his weakest point) to thus improve everything, but especially the canter.  In lunging him, it will allow me to school him through the gait without worrying about my inability to ride and therefor hinder him. I chose to lunge him for roughly 15 minutes before getting on, with the end goal being of making a few trips over some canter cavaletti before putting a short ride on him.  It is very warm and we're both really out of shape, so I didn't want to push it but got to work despite Coral being nearly done her ride as she was already lunging before I even caught Kidd - woops!

I caught a dozing Kidd from his large paddock and tied him to the side of my trailer, which is conveniently located just outside his paddock.  I brushed him, noting his obesity and nicks and bumps as I worked over his body from one side to the other.  Within a few minutes I was tacked up and leading Kidd to the other side of the yard and into the small, but convenient outdoor arena.  I put him through his paces and over some cavaletti to work on his strength (or lack of), primarily on the right lead, and then swung a leg over.

I haven't been riding with spurs this year, because I don't know where they are, and I instantly noted Kidd's general lack of interest in acknowledging my left leg, regardless of the direction I was travelling.. I focused on some large, looping figures such as EXB (and vice versa) changes of direction, serpentine's, loops, squares, and leg yielding from the wall to center line.  With little improvement, I hollered in Coral's direction and asked to borrow her whip.  Now, if you don't already know, Kidd hates whips.  I literally have to turn his head away if someone hands me one because he will instantly get tense.  Even while lunging, if I use a lunge whip most days he will take off at a canter and refuse to stop; he's been like this since he was a baby and I have no idea why.  Occasionally I ride with a whip, but most often I prefer spurs... however, mine have grown legs.. so the moral is, for me to pick up a whip, you know I need it because just carrying it increases the chance in me eating dirt.. however, he didn't mind it today and i'm chalking it up to all his extra padding..

Upon picking up the whip, I continued onto my ride and rode some squares, touching him once with the whip when he ignored my leg.  From there, I only used the whip one other time as he was then on the other side of the spectrum in being nearly over-reactive to my left leg, which isn't necessarily a bad thing, just slows things down a little as I need to re-establish Relaxation before proceeding.

We worked through some squares, and taking inside bend on the right rein without blowing through the shoulder.  I utilized shoulder-fore in a lot of the exercises, and simply lowered my expectation for quality, and just aimed for relaxation and suppleness.  Kidd is very resistant to the right rein and while it's not uncommon, it's currently magnified and I can only assume it's because a) he's out of shape; and b) he needs to see the chiropractor.  Regardless, I made the decision to ride him through it and just accept a little less than perfect *GASP*, and reward the effort.  Ironically this is something I preach to my students and often overlook in my own riding.

Once I was satisfied with our trot work, I proceeded to Canter.  Often I do the right lead first to 'get it out of the way', but today I chose to school the left lead first.  Lately I have put less focus on the left lead and as such had 5 lovely transitions both up and down; one of which was out of walk, and worked on sending him forward and bringing him back on the circle.  Because of his lack of fitness, the Collected Canter we had been striving for in previous years was temporarily put in a ziplock and back in the fridge, so this was a great exercise to just get him using his hind end more and respect my half halts.  He did quite well, so I rewarded him and took a walk break. 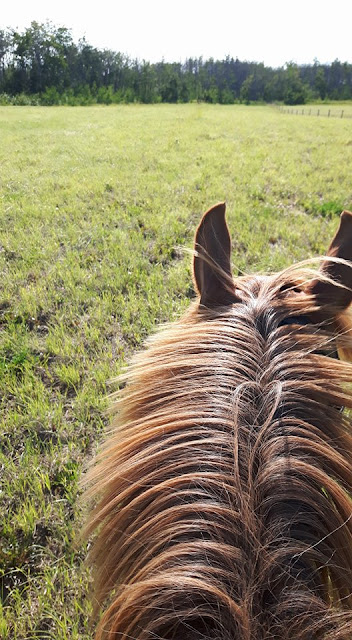 I switched directions and went back to riding squares, and doing so with inside bend on the 'straight sides' to establish the outside door is CLOSED AF KIDD, CLOSED AF.    I picked up Canter when the trot felt right.  In half a circle, it was falling to pieces. I transitioned to trot, re organized and asked again.  Again, in half a circle, all hell was breaking loose.  I abruptly halted him; I didn't care how fugly or incorrect it looked - I was shutting that mo'fo down.  I went back to trot, and tried again and history repeated itself. This time, I let it get ugly.  I'm famous for telling my students "It's allowed to get ugly, it's just not allowed to get mean" and I had that playing on repeat in the back of my mind as my frustration and anxiety grew.  I gave myself a pep talk, and tried again.

Literally, the best right lead Canter I have had on Kidd in years. YEARS.  It felt fantastic and it took everything I had to not push the envelope and play with it a little more.  I settled for 3 steady, engaged and supple circles and instantly went to walk and dropped my reins as I rubbed and patted him all over.  This was a massive break through.  The average person is likely reading this and saying "so?", but if you've ever felt so lost, confused and incompetent while you try your best to correct behaviorial issues that, quite frankly, scare the living sh!t out of you, you learn to appreciate the little things.. and for me, this is more than that - this is a milestone. 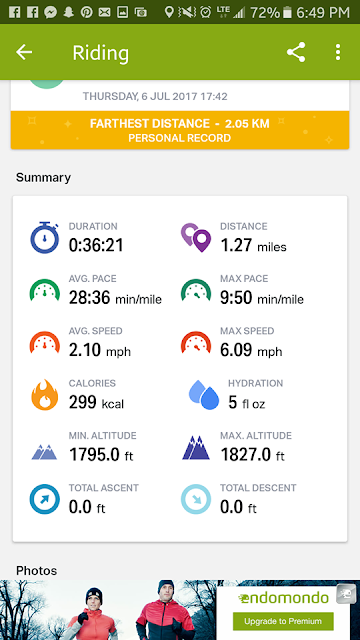 I was scrolling through my Reading List today and came across a thread written by my friend Cathryn entitled "Fear".  She spoke of the crippling anxiety she faces on a regular basis and how it can make her not feel like riding, despite loving it.  I feel she deserves a shout-out because I can whole heartedly agree, and my ride today is a testament of what can happen if you stick it out and just try, try again.  I have struggled with equestrian-related anxiety for the past few years and it's truly amazing to me that I have managed to do as well with Kidd as I have as a result.  I can honestly say of at least 75% of the times I swung a leg over Kidd in the past 5 years, I was scared out of my mind.  Has Kidd ever done anything to make me question my safety? Well sure, it's bound to happen, but I often fall victim to the evil, twisted spiral of "What If's", and I am now just starting to get over it.  We all  have our struggles, trials and tribulations to overcome but that is OKAY. There is a reason we are, for the most part, amateurs, and even professionals fall victim to struggles.  As a result, Kidd and I went on our first solo hack, which was really more of a cool-out in the pasture.  We didn't go far, and he was a little behind my leg going out and a little rushed coming home, but regardless I could not be happier and really feel like I needed this fantastic evening with my boy <3