Hell in a Hand Basket

July 11, 2017
I really strive to remain positive when things feel truly sideways, and I always try to find a good moment to end my rides on.  To be honest, I had some really nice moments today, but i'm struggling not to get hung up on the crazy train.

So far, my week has been trucking along relatively decently.  Kidd is still having some issues on the right lead, but not yet to the effect of last year - which is a bonus, but i'm still feeling torn and I would be lying if I didn't say I was worried that we will revert back to that... but alas, I keep trucking along and picking away at it. 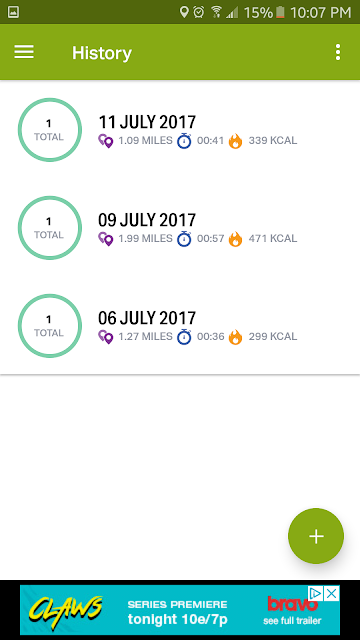 On July 9th (Sunday), C and I decided to go for a hack.  I was already in the arena and decided to lunge Kidd prior to getting on for sake of letting him warm up again without me hindering him.  I wasn't expecting C to come out, so it threw a bit of a wrench in things but I'm pretty flexible.  We were previously discussing hacking at least once a week to get out of the arena for the sake of all of our sanity, so when she said she was short on time and asked if I just wanted to ride in the field I jumped at it, and knew Kidd would be game.  I hopped on Kidd and walked him out to the back field, where C & Hershey were waiting.  We rode for about 30 minutes through the rolling hills in the back field.  C & Hershey mostly just cruised, and I worked on transitions up and down hills and leg yielding.  The neighbour was out in his crop mowing some weeds and while Kidd was a little tense, I was really happy with him.  I really wanted to school the Canter, so I took him back to the arena afterward and though more discussions on the right lead were necessary, we ended on a good note.

I cooled Kidd out, hosed him off, and turned him back out.  I ran back to the house to go pee and came out 3 minutes later to a ridiculous storm that came out of nowhere!  I made it as far as the barn, as I still had to feed, but hid out questioning if I would make it out of this alive.. 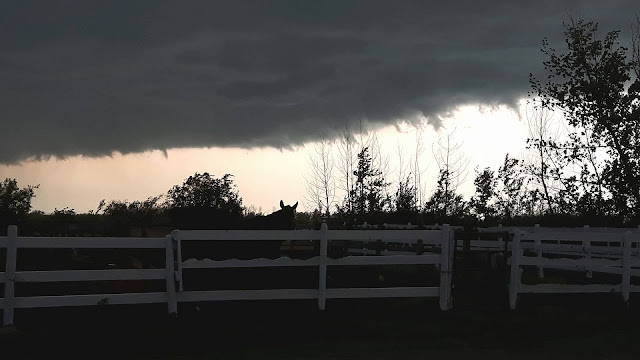 Obviously I survived, or I wouldn't be writing this... but over all, I had a pretty great weekend.  It was also opening weekend of Horse Racing and my family had 1 horse racing.  Much to our surprise, the giant bean pole came in a respectable 3rd place! 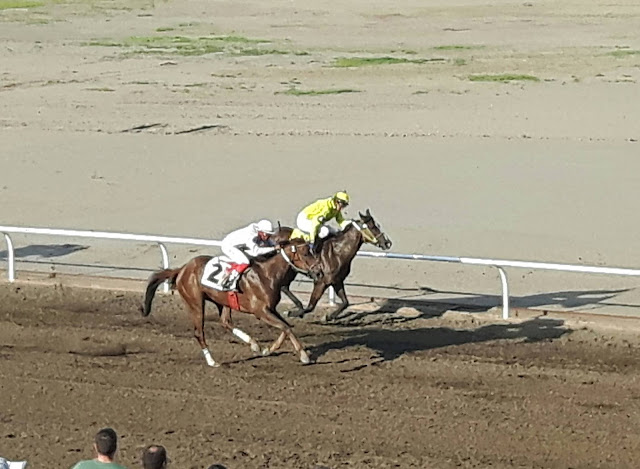 To conclude my weekend, I cleaned my tack and enjoyed some Netflix.  As someone who makes Saddle Soap, my tack was emparassingly filthy - but my baby is looking spiffy again! 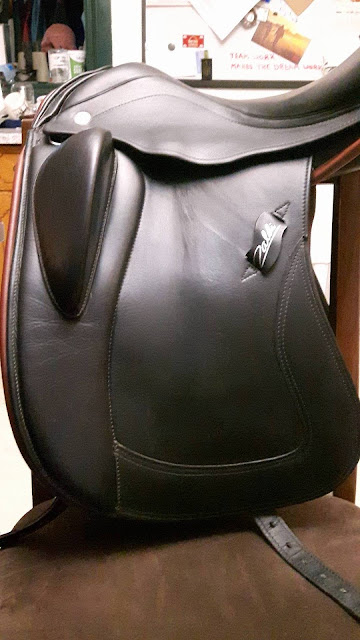 Monday, I was so tired after work and ended up skipping riding, so tonight I was rarrin' to go.  C was coming out after work so we could ride together, and she lunged Hershey while I got my poop in a group.  I opted to skip lunging and just hopped on.  With long reins I was planning on letting Kidd have a nice long, loose warm up.  Sadly, about 2 minutes into my ride, Hershey spooked and bolted at a cat in the bushes, and as such Kidd reacted as well and took off.  I kept my reins long and just kept the pressure on the bit until he eventually slowed down.  If nothing else, I have to say my seat feels really solid this year.... but prior to that, he was falling asleep and behind my leg but as soon as that happened, our entire ride was out the window. 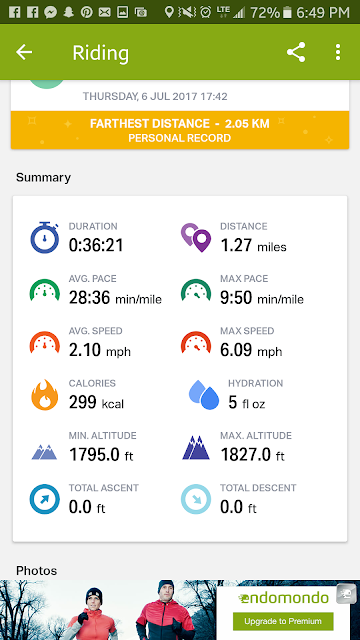 Normally Kidd settles quite well and carries on with life, but we spent 40 minutes just trying to establish rhythm and relaxation even at a walk (which was more like a jumbled, pracing, awkwardness).  I got frustrated and just stood at the buckle in the middle of the arena for 10 minutes.  At that point, I shut off my tracking App (Edomondo), as I had accepted that I needed to seriously lower my expectations for the ride and at that point, I just wanted a relatively paced walk in a half-ass decent shape that resembled a circle.  Luckily, halting for a while helped as we killed that awkward egg shaped thing I like to call a circle.  I got a little cocky at that point, and decided to try the right lead Canter... because i'm stupid.  Surprisingly, we only had to have 2 chats about it, but the third time our Canter was lovely and I ended it at that.

In hind sight, even though the entire ride in itself went to hell in a hand basket right off the bat and we had a lot of 'HEY POO HEAD, LISTEN TO ME AND CHILL THE F OUT' conversations, we had far less issues in the Canter than the last few days.. right? 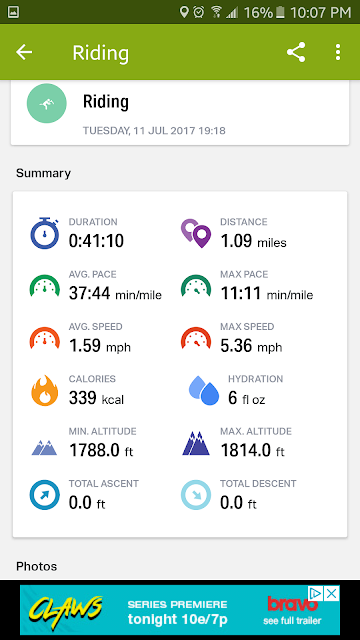 I was going to write this blog post at the end of the week, but the weather is looking iffy and i'm not sure how much I will get to ride as a result... but I hope I can, as I'm truly not satisfied with my ride this evening.  Plus, I think I figured out how to make my app work so that it actually GPS's my rides better, because currently it just shows a bunch of super random straight lines once you zoom in on my ride in the arena (not shown).