January 04, 2017
Still not much new going on in my life so this will be yet another 'boring' blog post, but I have been missing writing.  Plus, just because i'm not riding doesn't mean there isn't much happening in my horsey-related life.

Firstly, Kidd is still incredibly fat, fluffy and adorable for those who have been curious. I know this blog seems to predominantly swirl around Kai, but that will change once I am riding regularly again.  For now, Kidd is still enjoying his much-deserved winter off.  He's still the light of my life and is currently beyond the "I love being a wild horse, you're the best mom!" and has advanced into "I will never speak to you again, i'm so BORED"... but this too shall pass.

To follow, I thought I had a plan with my spring Veterinary plans but I decided to look elsewhere for a quote, just for the sake of comparing pricing.  The Vet I contacted for a comparison quote is roughly 1.5 hours away. I have never used them but they have always been very quick to answer my questions, and I have many friends who use them.  Much to my surprise, the quote provided was literally half what I was trying to scrounge up for the travelling vet who will be here in a month.  Needless to say, even factoring the additional fuel, I will be hauling to the Clinic 1.5 Hrs away in Dawson Creek, BC.

I've opted to do Rads on Kai's Fetlock, as well as have a Breeding Exam and Routine Coggins and Vaccines on Nikki, a requirement of the Stallion Owner.  Nikki is booked in to head to the farm where the Stallion stands in May, but when exactly in May will depend on her cycle.  I'm hoping Spring comes early as I'm a total chicken when it comes to driving, let alone hauling horses, on shotty roads.  Due to this, i'll probably push the appointment as far as I can therefor at this point i'm looking at hauling there sometime in April. 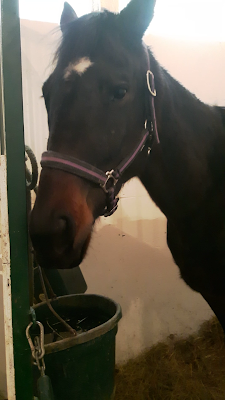 I know this will be in the forefront of most peoples minds, and I personally find it interesting comparing pricing from around the world so here is a breakdown from the Vet I will be going with.. for the record, I rounded the numbers off.

To provide a little bit of clarification, Nikki was not vaccinated last year (in fact, she hasn't been vaccinated in years to my knowledge) and therefor requires boosters.  As well, I didn't include additional views on Kai's radiographs as it's a localized area and I don't suspect we would need to do more than 4 (which is included in the initial exam).  So basically I'm looking at about $567.00 + Tax for both horses.. My truck is incredibly fuel efficient so I'm looking at roughly $50 in fuel, and a day off work which isn't a huge deal.

I also have the remainder of the Stud Fee left owing as I had to pay 50% up front when I booked it last summer.  I'll also have to pay board on top of it when she's there, so i'm really hoping all goes to plan.  All in all, including the Stallion's Stud Fee, the Veterinary Expenses, Hauling and Board, assuming she catches first try I am looking at roughly $1,750.

In other news and 100% unrelated to the previous topic, i'm coming to the realization that I've got so much going on and it's only going to get crazier in February/March.  Naturally, it won't slow down as the spring pushes onward however what consumes me from April onward will mostly be horse-related and therefor i'll be able to accomodate riding two horses easier.  The desire to have some solid time under Kai's girth is on the forefront of my brain, but paired with literally 0 interest in riding at the local indoor during the busy months (November - end of March) from being burnt out from the crowds, i'm toying with the idea of boarding her there for a few weeks and having a friend ride her.  I still plan to ride her at home a few times first, mainly because I don't want to pay someone to go through those first few 'blah', short, simple rides back under saddle.. I can do those at home for free myself.

I thought for some time about who I would hire to ride her.  I think if she was cowboy'd, she would shut down, but I also don't want to pay someone to doddle around on her for 15 minutes. I can do that myself, because quite frankly in Feb/March that's probably all i'd have time to do myself.. I also needed someone who isn't afraid of her, and someone who can ride out her airs-above-ground if she chose to show them off under saddle.  After some thought, there was 1 person who stood out above the rest to me as a suitable hire.  I'll be honest, I was blown away at what she charges per ride ($50).  (If you're reading this I'm certain it's worth it, times have just changed since I was getting paid to ride for other people!) but she just so happens to be getting married this summer and we're discussing doing some trading; her putting some rides on Kai in exchange for me photographing their wedding. 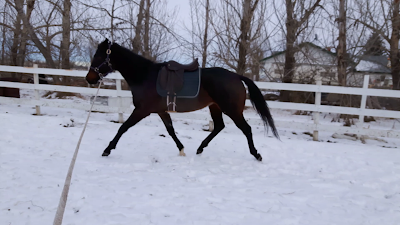 I'll be honest, I have a serious moral issue with having someone else ride Kai. I wouldn't consider it 'sending her out for training' since it will probably only be 10 or so rides, but regardless I have such a mental block with this.  I want to do it, and I think i'm hung up on the thought of people judging me - thinking I'm scared or what ever.  As someone who advertises themselves as a coach and prides herself on doing all Kidd's training thus far, it's merely a case of me not having enough time but not wanting her to sit around.  Plus, i'm certain the rider in question will do right by her.. I just keep reminding myself that I don't think there will be much 'training' done in the few rides, just simply getting her back into the swing of things.

In closing, while it has improved some, I'm not liking the look of Kai's topline - most specifically her loin area.  I'm aware it's weak and under muscled, but I know the 'lumpiness' can constitute for gunked up Kidneys.  I initially put her on Magnesium and didn't notice much change (though there was huge improvement with Kidd this summer on it), and as a result I decided to pick up some Omega Alpha Kidney Flush and see if that improves things.  I have faith in some of OA's products (though not all) and i'm curious to see how this goes!

At first glance, it almost looks like Kissing Spine but i'm quite confident that is not the case.  While this is unfortunately common in TB's who were started too early, to palpate it feels more fibrous (like muscle) rather than the skeletal structure itself.  I may stand to be corrected, but at this point I believe it can be corrected with a chiropractor visit (her left hip is visibly out of alignment) and proper work under saddle.