January 15th was a day for the books!

January 15, 2017
Today, on January 15th, I rode Kai for the first time.  In general, today was an incredibly exciting and nerve wracking day; a day for new and adventurous endeavors with Kai. It's been particularly warm the past few days, but sadly today that warmth was accompanied by wind.  While it could have been worse, it was enough to have all the horses galloping and bucking all over the farm.  As a result, it had Kai pretty jittery.  In fact, she was the most revved up she has ever been.  I lunged her as usual, and she bucked and squealed like a complete idiot.  She would settle and carry on, then act a fool again.  This continued for a whopping and unfortunate 45 minutes.  She got herself quite sweated up and while many would think 45 minutes of that kind of energy would surely have her exhausted but that wasn't the case - and typically isn't with a Thoroughbred.  Luckily though, she had calmed down significantly and Ray, my designated helper, walked around the corner to give me a hand for the first ride. 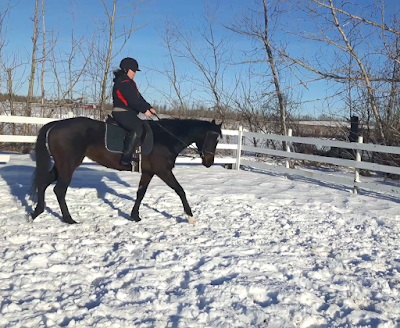 When it came time to stand to be mounted, she decided she had caught her breath and was ready to be goofy again.  She showed signs of anxiety for the first time.  While she has been a little antsy at times, it was hardly comparable.  While she stood quite still, she was chomping at the bit, tossing her head, and trying to bite anything she could get her mouth on - reins, ray, etc.  Her anxiety put mine through the roof, and yup - I chickened out.  It was really weird. I never used to think twice, i'd hop and go... but as I've gotten older I have developed some value to my life and I know when to swallow my pride and step back.  Luckily, I am blessed with an incredibly wonderful husband - who is also very sticky in the tack as well so he quickly hopped on while I held her and they were on their way.  I told him he could allow her to trot if she wanted to as long as she felt controllable.. He was on her about 5 minutes before I regained my confidence and shoo'd him off and on I got. 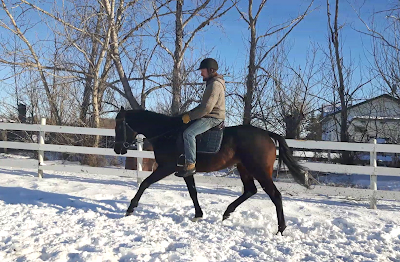 The first thoughts going through my head were to be expected; "i'm finally riding my new horse", "shoulders up and back, strong core, feet not too far in the stirrups in case I need to bail", "holy she feels tall even though Ray just said she feels like a 2 year old thanks to his ridiculously long legs", and so on.  As we continued to walk around, I settled into her rhythm as she shuffled along the frozen ground while the wind whistled around us, and my butterflies subsided.  I began to play a little with her buttons (or lack thereof), and I was really satisfied with her walk/halt/walk transitions.  She didn't reef or pull in the downward transitions, and was prompt to move forward with relaxation.  I discovered that she's very stiff when it comes to lateral flexion, and she is very unresponsive to your right leg regardless of the direction you're travelling.  While it's 'worse' on the right rein, it's not something that's uncommon for OTTB's.  As well, she has a date with the Chiropractor this week and perhaps her right sacrum being misaligned isn't helping the matter. 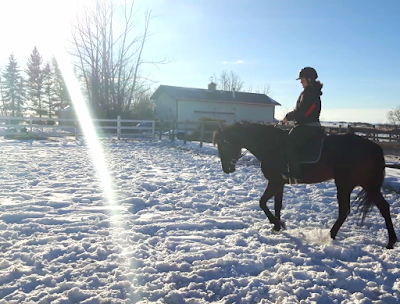 I was happy to find her relatively responsive to the bridle.  She wasn't excessively light, and she wasn't heavy which was great.  She held a nice contact in my hands, although fidgety but I can live with that.  She wasn't excessively 'chompy', and she wasn't overly dramatic to leg pressure.  She showed her greenness as a riding horse, and there was at least 1 situation while Ray was trotting her that it clearly crossed her mind to show of her broncing skills, but she responded well to Ray's quiet and subtle correction and she continued on without problem.

The rides were generally uneventful, which was a total relief!  At one point in trot she was pushing on Ray's right leg and he gave her a small kick and she scooted forward off it.. then when I got on and was walking the opposite direction he was, she was leaning on my right leg so hard and wouldn't get off it - we almost walked right over top of the mounting block!  As well, she confirmed my hunch that she doesn't have a lot of experience trotting.  She prefers to canter on the lunge line despite slip sliding all over the place on the shotty footing, and she did the same when Ray allowed her to Trot.  That being said, she may have been confused by him sitting her trot and expected him to be intending to Canter as a result.  Never the less, it was incredible how much I enjoyed her after riding her for 10 minutes. I felt so much more relaxed and confident around her. 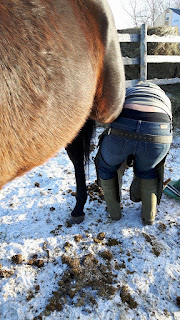 If that wasn't exciting enough, Kai also had her first farrier appointment since I got her in November.  It's so nice out, so we chose to just trim her in the paddock and enjoy the sunshine, since it's few and far between these days - even if it means it's joined by wind.  Regardless, much to my surprise she was fantastic!  She stood wonderfully, and her boredom consisted of her nibbling on the lead rope occasionally between naps and staring at stuff - you know, horsey things.