Any Progress is Good Progress!

December 01, 2016
I have to say, at this point I think I deserve a medal not only for keeping up with my blog, but also for being a horrible employee and heading outside to work with Kai every afternoon this week thus far.  On Tuesday & Wednesday I had particularly shitty days at work and while I thought I left my frustration and lack of competence in the office but evidently I carried it with me into the arena with Kai.  It was blatantly obvious she didn't appreciate my short fuse and as a result, she got a little rattled due to the energy I brought to the session as well as my quick reactions.  A wise man once said emotions don't belong in Horse Riding and I do think it's true to an extent, but to put it simply I just wasn't in the mood to put up with her baby crap - especially on Wednesday (yesterday).  Don't get me wrong, I wasn't abusive or over the top.. but rather, it was more of a matter of "I'm not asking you twice to walk on, MOVE YOUR @$$!" lol.  Not the best of days on my part and as a result I wasn't confident I had accomplished anything.  We did some new things which is typically my goal for each session, so I suppose in hindsight we did make some small advances. 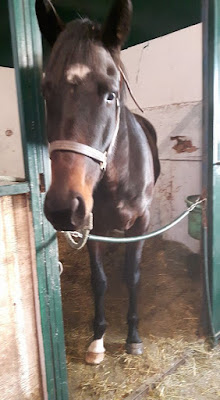 Today I entered the arena in much better spirits and left all my emotional baggage behind me.  Work was slow so I put the phone on call forwarding to my cell phone and decided that today I really need some horse therapy.  I decided to put in a full session rather than just throw a bridle on like I have the past few days.  So I caught her and took her into the barn.  To be honest, I've been curious how her weight was looking since I haven't pulled her blankets in a few days so it was a good opportunity to check her body condition.  While I'm being honest, I will also say that period I went through that resulted in 0 horsey time? Yeah, I also wasn't mashing her and I was curious to see how she was faring.   To my surprise, she looks great.  I still want to see more weight on her and I'm a little worried how slowly she's putting on weight. I know, I know she's a Thoroughbred - but her previous owner said she was an Easy Keeper.  She's not horribly thin by any means, it's just taking longer than expected.. but, not mashing her for about a week possibly didn't help.  That being said, her coat is looking fantastic which always makes me happy! 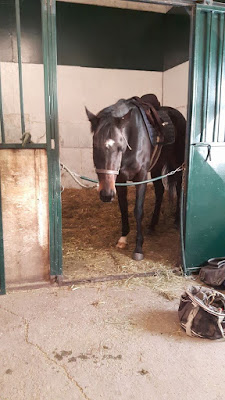 Much to my surprise, she was quite calm in the barn.  I put her in a different stall and while she wasn't keen on standing still, she was respectful of my space and was great to tack up (but that's not usual).  I decided, since the last time we had a 'full session' with tack and the neck stretcher she threw multiple fits, I was most definitely going to see how handled things today now that she's been getting worked relatively consistency.  Much to my surprise, she gave 0 shits and was quite fantastic.  For the first time, I ran the lines thru the stirrups and while normally I would tie them together under the tummy so they don't swing all over the place I opted to leave them 'free' for a likely obvious reason - to gauge her reaction to the stirrups moving about.  I also put the neck stretcher on her again to discourage her from being so heavy on my hands.  While her mouth and balance has been improving all week, it's far more rewarding and forgiving than even the most skilled hands, and she worked wonderfully in it today!  0 melt downs, 0 freak outs!  Her halt transitions were spot on, and she only fussed about once while halted and quickly relaxed, which I think is our biggest improvement thus far.  I have felt quite a lot of pressure from friends and family to get on her already, but I'm trying to stick to my guns and carry on with my program.

She was so super today that I nearly went against everything I believe in, and sat on her without a helmet or proper boots (ok in hindsight I would have been really mad at myself, even if she was perfect I am a huge helmet advocate), but luckily my mounting block is frozen to the ground in a different pen so that stopped me from being a total idiot. 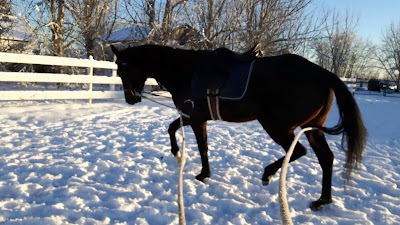 Some days I work her and I think "nope, this is definitely a ground work day" and other days I'm like "NON-EXISTANT SLAVE, FETCH ME MY ATTIRE" but truth be told, I will not get on her if no one is home and that is often the case 99% of the time when I get a chance to work with her during the week.  It's supposed to be quite warm for the next few days so I'm hoping I can get my mounting block out and get on her this weekend when Hubby is around to supervise.  Either way, I know Winston Churchill said No Time Spent in the Saddle is Wasted, but I also feel that applies to ground work.  The improvement I've seen in her even in this past week of consistent work has things really coming along quite nicely, and I haven't even sat on her yet.  She's learning to use herself in a better way to prolong her soundness, and as she learns to use her topline she's developing some really nice hock engagement and lift through the shoulders.  She's getting consistency lighter in my hands, and is having less and less freak-outs.  She's not very brave or confident but with time things will improve I'm sure.  The ground driving on a circle has helped her be more comfortable with them around her bum (though she was never *super* concerned or anything, probably because she was driven extensively when she was started), and I'm getting a really good idea of how she will be to ride!  Have I mentioned how much I love ground driving??

Anyway, I almost didn't blog today because I feel like all my posts are really redundant, but I reminded myself I started this blog primarily for myself to track the progress I make with my horses, so sorry if this was boring to read!