November 15, 2016
Today the stupid mud was frozen, which was reason enough to jump for absolute joy!  Sadly, by the time I was able to sneak away from work for a few minutes the top of my recently floated mud pit of an arena had become greasy and slightly slick from the warm sun despite the air being a crisp 4 degrees Celsius.  I took the risk, fueled by missing getting to know Kai further, and her growing frustration due to the muddy pen she's unfortunately stuck in.  I made the plan to simply lunge her at the walk, and set out to bridle her and get on our way.

My stupidity was second to none, because I should have known better than to expect a 3 year old OTTB to just walk given that she's in an arena she's never been in before, and she's otherwise stuck in a smaller, muddy pen.  I'm still torn between what caused her sudden freak-out that resulted in her tail up over her back, nearly running me over and being impressively balanced during her goofy charades on less than ideal ground.  Its possible she spooked at my cats playing on the outside of the arena, but more than likely I think she actually sunk in the mud and panicked and as a result used it as an opportunity.  Regardless, things calmed down and we were able to lunge quietly at the walk in both directions before ending it on a good note. 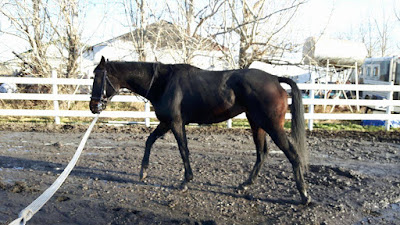 Even though it was a very short session today, I still feel like we accomplished some things.  Perhaps not on the 'becoming a riding horse' scale, but we were still able to continue plugging away at relaxation, patients and understanding.  One appreciable characteristic I'm finding is that despite, evidently thinking being whacko on the lunge line is fully acceptable, she will stop and stare at something or dive in on the circle, but she has never tried to spin and go the other way.  I realize that can seem pretty minor but in my experience with horses who aren't 100% with bit contact or giving to pressure they just panic and typically wind up getting loose given that the idea of a person reluctantly trotting behind a run-away is just another reason to continue panicking and more often than not the safest thing to do is just let go of the lunge line and try again.  Additionally, it tells me that it has been made clear to her to continue moving forward.  Backing up out of fear is a foundation to rearing, and that's never a fun time. 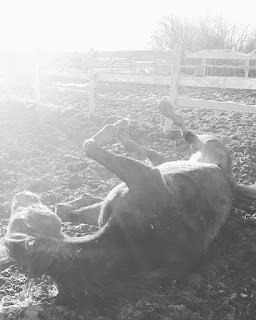 Once she was able to self-soothe and relax on her own, I ended the session and we went back to her pen.  Again, we had to go through the whole 'chill out' thing because all she knew was she wanted her bridle off.  I had the throatlatch undone due to using it to hold the reins up so I decided to just stand there and wait it out.  Immediately, she got antsy and fidgety and chewed on the throat latch. I put an end to that and again waited until she relaxed before removing the bridle.  I'm sure it's partially habit, partially neurological, and partially due to the fact that she was clearly dying to roll in the mud since she was naked and loving the sunshine.  I know this, because the second I took the bridle off she dropped!  Upon getting up she squealed and leaped in excitement - something I sort of love because Kidd does the exact same thing every time he enjoys a great roll! 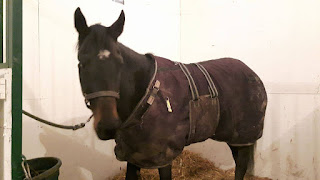 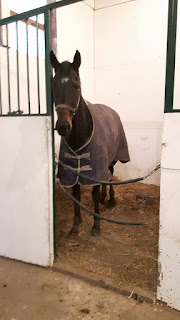 I decided to leave her naked for the rest of the afternoon, and I snuck out of work early this afternoon to take her into the barn for a grooming session.  I'm sure glad I chose to brush her out today, because she had so much mud ground into her coat I literally had to scrub her with my mane comb because nothing else was doing it.  She seemed to really enjoy it though.  On the plus side, she's been great to brush her mane and I think the issue with it prior was just a lack of understanding on both our parts.  I'm glad we're beyond that, because quite frankly it was a little annoying and extremely dramatic on her part.  I think I previously mentioned, as well, that I am incredibly lazy with picking feet. It's my down fall, I know.  Additionally, if I'm not 100% comfortable with the horse I typically don't do their hind feet.  I have found that Kai is relatively protective of her hind end, which is typical for a lot of mares.  Today upon picking her first front foot, she lifted her hind foot in a relaxed anticipation.  This was really new and showed me that she's beginning to trust me.. I knew I couldn't just leave her hanging so I just went for it - and survived!  I didn't have any doubts that she would kick me, but regardless, I still didn't fully trust her.  We enjoyed a long grooming session to get as much of the caked, ground in mud off her coat as possible.

It's cooling off here as previously mentioned, and I'm not in love with her lack of weight though I realize it's been less than week.  As such, I decided to put an additional blanket on her to take being cold out of the equation. I don't want to give her any reason to not gain weight.  I have a lovely fleece filled blanket with a belly band that Kidd typically wore when he was fully clipped and boarded at the local indoor. It's great because it kept him clean at night, and staff could just toss his turn out on over top.  Given the fluctuating temperatures I felt it was a good choice for the same reason - simple to throw a winter blanket on over top and pull it off in the afternoons if it warms up.  There was just one catch... it's a closed-front blanket and I had no idea how she was going to react to sliding a blanket over her head.  To be honest, I think I was more concerned about her reaction than she was, because she literally gave 0 shits.  Such a good girl!

I turned her back out and had already put her mash out in her paddock so I had to deal with the whole 'OH MY GOD, I ONLY ALMOST HAVE FOOD IN FRONT OF ME 24/7 BUT I CANNOT CONTROL MYSELF I MUST BE A COMPLETE IDIOT BECAUSE I NEED TO EAT IMMEDIATELY, GET THIS HALTER OFF ME WOMAN' type thing that resulted in a few 'smarten up' discussions, but upon achieving that she was free to stuff her face.

As I walked back to the barn to hang up her halter, I noticed Kidd was standing at the gate of his 10 field and I decided to walk back and see him because I have basically just left him to his own devices.  I haven't kicked him to the back burner or ignored him because I got a new horse, in fact this was my plan all along before I even came across Kai's sale add.. He and I need some time away from each other.  He needs some time to be a horse and just revel in being obese and ignorant.  He loves that.  I went and snuggled him and cuddled him and was reminded why I absolutely love that horse.  I so miss riding him!

If my plan works, I might actually be able to ride a little bit at home this winter.  We've floated the arena so that it's flat, and upon being frozen it should be safe for at least some walk and trot.  I'm very 'anti-sporatic-riding', but I may be able to be convinced at this point.  Fingers crossed!! 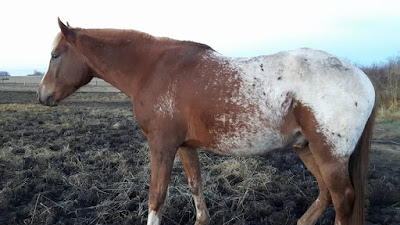