October 21, 2016
Back from the dead perhaps?  You can blame my good friend/enabler/fellow blogger.... or reward, which ever you prefer.  Anyway, I recently taped said friends senior mare and while its something I've always been aware of, its become known due to her blog post (http://thatredmare.blogspot.ca/2016/10/when-you-suck-at-blogging.html#comment-form) that people are really interested in this alternative therapy option for your animals.

I would like to start with a little bit of backstory on myself and how I got into Kinesio Taping (hereby referred to as K-Tape/K-Taping or just Taping), so buckle up. 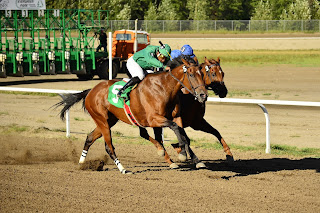 For some time I have been drawn to remedial therapy through so many different outlets I'm nearly certain I can't list them all.  In my day-to-day life I have always felt a deep connection to nature and strongly believe there are so many alternative therapies that are just as effective as modern medicine.  Perhaps its my inner conspiracy-theorist, perhaps its my connection to my family history of Medicine Women/Men, perhaps its just my drive to be self sustainable - I really can't tell you.  Regardless, I've always been completely enthralled with the body - specifically the horses body - and how it works in such balance to maintain itself.  My long term goal has always been go build a business around alternative equine therapy, and K-Taping was an easy introductory option to begin building my skills.

Has it ever dawned on you, that nearly 90% of injuries in horses are related to the owner/rider/handler rather than the horse itself? Of course there are freak pasture accidents as well as natural injuries often related to age, but the common injuries such as fractures, chips, arthritis, tears, bows, and overall body soreness are almost always related to what the owner/rider/handler has asked the horse to do.  Let that sink in.  If you're like me, you'll first feel an onset of guilt, followed by asking yourself what you can do to minimize your impact on your horses well being.
I'll be completely honest, I had absolutely no experience with taping before I got certified. I had heard of it due to my interest in alternative therapies, but I had never handled the tape, seen it be applied or saw the improvements it made.. but since working with it, I haven't looked back and I honestly believe it's an incredibly underused tool.

What does the tape do?
How do you apply the tape?

This is a question that's very difficult to answer - in fact, I won't directly answer it because like any remedial therapy it's not always safe to encourage people to 'figure it out as they go' without any training on the subject.  I will say there are a variety of different ways of applying the tape depending on the problem at hand.  The most common form used is referred to as the Fan Cut and it is used to decompress a wider area.  The Fan Cut is typically used on swelling, and I like it because it's easy to work with as opposed to using multiple individual strips.
While it may seem simple - you cut the tape and slap it on there and let the magic happen, there is a lot that comes into play, primarily with tension of the tape.  Often you'll see tape 'balled up' as I call it, where it develops a wrinkle-like appearance, and that is typically due to not enough tension being used.  That being said, too much tension can hinder the locomotion of the area, and cause discomfort for the horse. 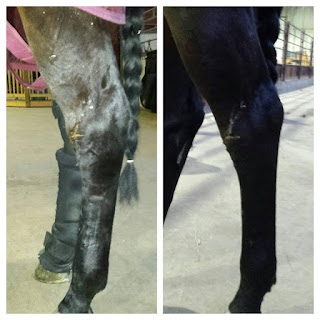 Above is a young AQHA mare who got her leg caught in a plastic coated wire.  Naturally she panicked and kicked until she was able to be rescued by her owners.  Unfortunately, the wire burned through her skin and caused swelling throughout her leg from the Gaskin to her Fetlock.

Her owners put Back on Track on her and while it helped some over the span of about 4 days, it was a perfect opportunity to test out my Taping skills, as it ironically happened right after I became certified.  At first glance, it doesn't look 'major' and the lack of flash on the photo on the right perhaps distorts things slightly.  The main area to focus if you struggle to see the overall 'thinner appearance' of the Gaskin, Cannon and Fetlock areas, is directly around the cut on the front of her Hock.  There is far more distinction in the joint itself, and the lumpiness around the cut is much smoother.
Keep in mind, the Back on Track was removed after I taped her as in this case they don't really work together since the boots were providing compression, plus I'm not really a fan of BOT for swelling but that's a whole 'nother blog post in itself... Anyway, at this point you're hopefully saying "wow, that is a big difference, what a totes kewl thang, but it gets cooler... this was less than 48 hrs apart.

Moving forward to That Red Mare (literally, the red mare)... Cathryn had asked me to tape Suzie for the second time, and this time I gave her a Full Body Treatment. Along with my certification in Taping, i'm also certified in Soft Tissue Manipulation - which is a fancy way of saying Massage.  These two forms of alternative therapy work hand in hand in many cases, as Massage also encourages circulation.  Suzie in particular struggles from an entire gaggle of old injuries that cause her to be stiff and sore and encourage general body stiffness as a result, but my main area of focus is always her left knee. I've advised Cathryn to get an X Ray, but it's believed at the very least she has arthritic development that gives her constant grief.  Because I no longer live in BC, I haven't worked on Suzie in many many months, and it kills me to watch what Cathryn is going through as both her and Suzie come to the realization that she is, what I would consider to be, prematurely retired, as a result of owner/rider/handler error in the past (meaning in Suzie's younger years).  Regardless, I think it was a breath of fresh air for all of us, when we saw the improvement in Suzie's knee after the Tape was removed. 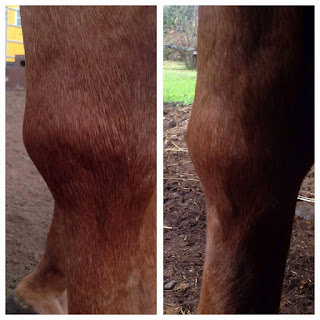 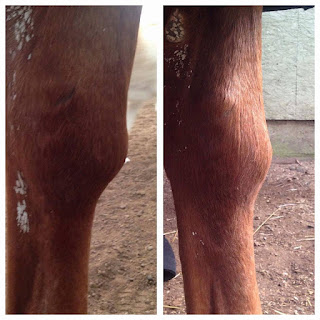 To take it one step further, once you begin dabbling in the dark arts of Wizardry.. wait, sorry this isn't Harry Pottah... Anyway, once you start dabbling in the art of alternative therapies, its only a matter of time until you're introduced to energy work through various forms such as Reiki, Vibration, and so on.

Now a large majority of you are probably tossing your hat at the computer screen hoping for once you could just learn something without some mama juju coming out, just keep in mind you could stop reading now and still take something away from this post.  I'm not here to bring you over to the dark side, convince you I can heal the world with my hands, or put on a fancy hat and charge you out the wazoo, I am here to tell you that it makes an even bigger difference when coupled with your remedial therapy techniques.  While it's totally irrelevant, I always find it funny when people say they don't believe in Vibrational therapy through sound and stones yet they will put their horse on a vibrating plate, or put a vibrating blanket on them.. Maybe i'm channeling my inner Santa here, but always remember seeing isn't believing, believing is seeing.

What do you charge?

Everyone is different in what they charge, and many people who are certified in other therapy options such as Chiropractic care, often charge minimally because they will adjust the horse at the same time and include the taping cost in that.  Because I'm not yet certified in Chiropractics, I charge minimally to cover my expenses and a minimal amount of my time.  I also give discounts to Senior horses (18+).  My pricing is currently as follows: