October 24, 2016
A lot of you probably don't realize, I actually have two horses. Heck, even I forget I have 2! I know you're probably thinking, "how do you forget you have two horses?" and the reality is, she lives in a small herd in the pasture at my In Laws farm.  Nikki (AKA With No Knickers) is a retired 2001 OTTB Mare who was born and raised on my In Laws farm. A few years ago I sold her to a [relatively] local woman who was interested in getting back into Barrels. Knowing she had a small budget, I sold her to this woman on my In Laws behalf, for a whopping $500. Keep in mind, Nikki retired from racing and basically hadn't been ridden consistently in many years and while she was good to handle, she was relatively green under saddle beyond walking and trotting around.  A few years went by and I didn't think much of it; I had spoken to the new owner from time to time but despite my search for a broodmare being ongoing, Nikki never crossed my mind even though we have a lovely young gelding out of her.  When my In Laws owned Nikki, I absolutely loved her.  Call me shallow, but i'm a sucker for Chrome and she's not your 'average coloured Thoroughbred" 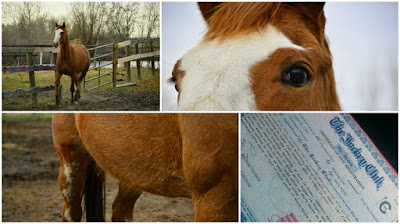 One morning while I sipped my morning coffee in the office, my Husband informed me he came across her add on Kijiji.  She was asking $700 and just wanted her to go to a good home.  I pushed past my instant ping of "She was supposed to let me know if she wanted to sell her!" and contacted her, asking for details.  What began as a joke about buying her back, quickly turned into something serious and after some wheelin' and dealin', she and I reached an agreement and I picked her up that evening.


Now I have an older mare that's basically been untouched in terms of riding for nearly 8 years because the woman didn't end up doing anything with her and the bottom line was I had some decisions to make.  I noticed she seemed to be coming into heat, so I approached my In Laws about breeding her to their stallion, who was a very successful race horse in his day.  While he is a different story for another day, I will say we tried multiple times and failed at getting her pregnant.  That being said, I did learn a lot more about her and that she's fantastic to hand breed with a stallion struggling to do his part. 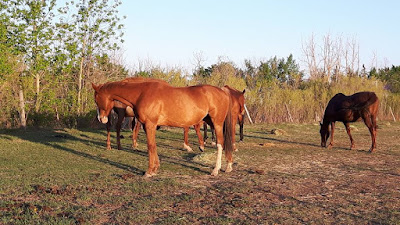 In August I took her to the Vet for a Preg Check just to be 100% sure she wasn't in foal as I didn't want to bypass any special treatment such as shots, etc if somehow by the grace of God, she managed to catch (or rather, he managed to get anything inside of her).  The Vet continually shook his head at me for breeding a 17 year old Mare who's foal one and only foal is 4 (2012),  but I tried to push it out of my realm of happiness.  Keep in mind, I use this vet selectively and while I don't intend to discredit him or imply he's incorrect, I suppose I just felt like there was no need in beating a dead dog.. and to be totally honest, I had a small shred of hope buried deep down inside that she was actually in foal, and he crushed that along with other things.

Regardless, I accepted that Nikki is not in foal and spoke to a Stallion Owner who is seemingly becoming my friend to some degree. I had spoken to him earlier in the year, but after my In Laws stallions struggles I decided to take the risk and book her into Cherokee Country for May 2017.  I think he will be a fantastic match for Nikki, and while his foals are still young I think the resulting foal will have plenty of run.. It certainly can't be any worse than what I would have gotten if she managed to get in foal to my In Laws Stallion.  While I love the 2012 Colt that came from that cross, I do find his offspring in particular to be hotter horses and most seem to have one kind of 'funky leg', regardless of the mare.

Nikki didn't hit the Winners Circle often (once, in fact) but she apparently was a decent Race Horse despite having minimal earnings.  Now, she's a bit hot to handle due to lack of consistency, but prior to selling her she was a good 'go to' horse who would tolerate being pulled out of the field after not being touched for 2 years and Ponying the race horses to exercise, so I think that says something.

At this point I'm honestly just crossing everything that's crossable that she catches and carries to term for an April 2018 foal.. The cherry on top would be a chromey, athletic, good moving, great brained filly that can be a successful Race Horse, then a successful Show Horse! Sigh..... a girl can dream, right?