I've officially owned Sierra 10 days and so far, i'm really happy with her.  It still hurts my heart to glance out to the field and see Kidd, but he's happy out with the herd on the pasture.  When they get galloping, he struggles to keep up and looks a little sore, and that affirms that I have made the right decision, though I don't know if it will ever stop hurting.

Last week, we had sporadic weather, but mostly excessive amounts of rain that left me with an arena better suited to mud wrestling.  As such, I took the opportunity to do some short, light hacks down the road.  While she had a few days where she was a little sassier than usual, it's really nice having a horse that I can mount who won't move a muscle, waits to be asked to walk off, and walks off with a relaxed back (for the most part).  Kidd encouraged a lot of fear in those initial 5 minutes of getting on as he was incredibly cold backed and once I was on, didn't like to stand still.  Sierra has really helped me overcome those fears and every day it gets better.

In the nick of time, the sun came out and we had high temps of 25C+ which dried out the arena just in time for our Dressage Clinic with a new clinician I had never ridden with.  Despite only owing Sierra a week by the time my first lesson on Saturday took place, I felt a little more comfortable on her. Admittedly, I had ridden her 6 of 7 days (not including the Saturday of the lesson) and though most were just like walking hacks, I felt like I had a bit of an idea of who she was.  While I still didn't know her reactions to certain things, I was looking forward to the lesson.  It was my first lesson in 2 years, and between that and a new horse I knew it was bound to be rewarding in one way or another. 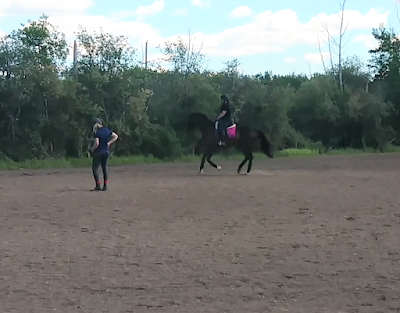 I am the president of our local sport horse club, I found this clinician and organized the clinic so naturally, I picked her up at the airport on Friday evening. I had never met her, but it was a great opportunity to get to know her and chat with her about myself, my new horse, and so on.  There were no lessons on Friday, and because the clinic didn't fill entirely we didn't start until noon on Saturday, and I rode at 3:00 PM.  As Saturday came and the lessons began, the temperatures began to rise and I quickly regretted scheduling my lesson for the heat of the day.  I took Sierra into the barn where it's cooler and took my time tacking her up.  I'm not familiar with her yet, so wrapping her legs took longer than usual.  With Kidd, I know every nook and cranny, the length of each cannon and just how many evenly pressured wraps necessary before cradling the fetlock and so on.  I had never wrapped Sierra's legs other than in bandages when I hauled her home, so I took my time to ensure things were just right and we were relatively represented well.  My matchy-match was NOT on point *GASP*, but hey, I put in a little effort. 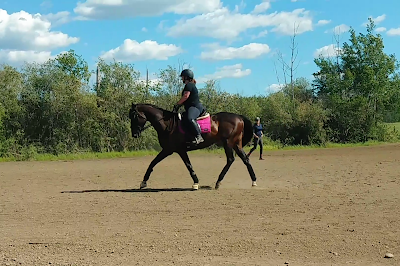 I took Sierra outside and walked her a lap around the arena so she could see the scary chairs, table, people congregating around the fire pit and so on.  It was quite breezy, which had me wondering if she might get goosey at the feeling of wind up her tail or the paper towel flapping in the wind, but equally greatful for keeping the bugs and blistering temperatures at bay.  Following my lap around the ring, I took her to the mounting block just outside the barn and prepared to get on. 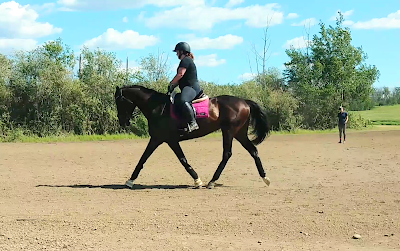 The main thing I wanted to work on, early on our relationship, is getting more of a feel for Sierra's back and hind end.  She has what I would consider "Eventer Dressage", where she's happy to tuck her nose and 'do the things' (no offence Eventers), but it's far from correct.  I knew there were some holes in her training, and I was 100% okay with that.  I went shopping for a very specific brain, and her training was the least of my concerns.  Once on, I began my warm up in a forward walk as she's relatively dull to the leg and prefers to stride out like a pogo-stick in the hind end with a stiff wither, neck, poll and jaw.  I kept her on a loose rein, which is another thing I love considering Kidd's cold back always had me warming up in more of a framed contact so I didn't die.  Regardless, we walked around the ring and I quickly put her through her paces while the instructor finished the Q & A around the fire.  Just as I finished my last canter circle, the instructor walked up and excitedly told me how much she liked her.  She gave Sierra a pat and continued to tell me how cute she was and how we fit each other really nicely.  The confidence boost helped, as I knew the ass-kicking was just around the corner. 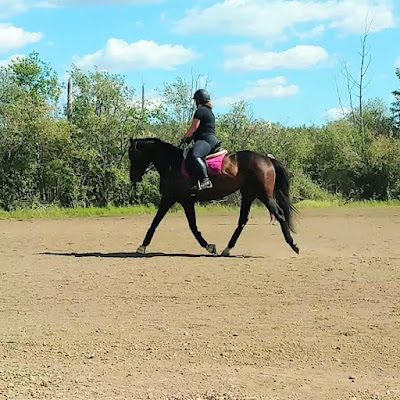 We began in the walk, having already spoke to the instructor about my 'goals' with her, she quickly came to agree that there is no concept of "hind legs to bridle", as she put it.  She's not particularly supple, but once she learns to use her body correctly she will feel much better.  She also commented on her weight and suggested that with a little more, she will likely feel even better.  We agreed she isn't necessarily 'thin', she's incredibly fit given that she's in the middle of the Eventing season, but we would both like to see her put a little weight on, and continue to develop a topline - noted. 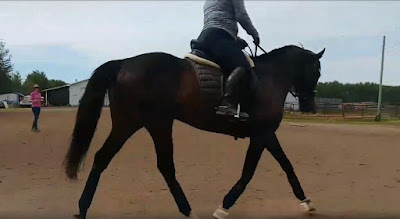 In the walk, we pushed for a forward, ground covering walk.  When Sierra would get off balance, she would begin to shuffle but she tried hard to step through into the contact, and the rest of the weekend often circulated around developing that back-to-front feel.  It was really interesting to work with a new horse and a new coach, and with the instructors help we were able to identify the 'holes' in her training and create a game-plan how to best approach them.  It is/was apparent in the trot the lack of connection and suppleness was magnified, and in the Canter even more so.  We really focused on engaging her hind end, and began addressing her Right Hind which she often wanted to carry to the inside.  Secretly I wanted to cry at the idea of that because that is now Kidd's 'issues' started, but unlike Kidd, Sierra was adjustable and then happy to 'stay' in line.  We worked primarily on the circle, schooling some counter bends in walk and trot, and traver/renvers in walk.  We played with the level of difficulty until it was 'too much' for Sierra and we discussed how to determine if she's slowing down to 'figure things out', or slowing down to evade.  We both agreed that challenging her was acceptable, but pushing her too far was counter productive and would result in frustration, which is something I will really need to remember for future rides.  Sierra seems to be a little 'afraid' of the bit and has a very sensitive mouth, so I did my best to maintain contact with a steady, following hand, rather than excessive suppling or half-halts, which is incredibly difficult for me as I am a micro-manager but ultimately until she learns to come forward from the leg, all the suppling and half-halts in the world are a little pointless.

As Sierra began to figure out what my leg was asking, we had a variety of reactions.  She pushed into my legs and ignored me, leaped off my legs, and sucked behind the vertical but as the weekend went on, the inconsistent responses lessened and she slowly began to learn that she could be ridden with leg, that it means something, and we could slowly begin to piece things together.  I was absolutely exhausted on Saturday, but was really happy with my lesson.  The new coach was fantastic, and Sierra really tried.  Lately, I have felt very 'foreign' on a horse, likely because I really haven't 'ridden' in like, 2+ years, but we are slowly figuring each other out and I gave her a cold shower, body and leg brace and a long brush following our ride.

Sunday I switched with a friend and was the first lesson of the day at 10:00 AM.  It was much cooler, thank goodness, and I was excited for our second lesson albeit sore from the day before.  Much like the first day, I took Sierra into the barn and took my time tacking up, wrapping her legs, and eventually getting on.  I was just about to get on when the instructor arrived so I hurried to my warm up and Sierra felt wonderful.  She felt happier to go forward, happier to accept the aids, and straighter in general.  She was doing far less 'hipping in' to the right and when she did early on, I corrected it and barely had to ask again as long as I remembered to turn the shoulder.  I struggle to ride to the right due to an old injury and my go-to is always to pull the nose around even though I KNOW turning the nose opens the door for the shoulder to go in the opposite direction, so this is 95% my problem that I need to address.  Once my lesson began, the instructor noted that she looked great today and we got away from the circle and did more figure-work and leg yields to really confirm the shoulder control I tend to ignore.  Additionally, we worked on the leg and seat aids and focused hard on making them very 'clear' for Sierra's sake, all while pushing her up to the bridle.

While we didn't do a ton of circle work, when we did it was often in either a shoulder-fore or slight counter bend position, and we worked on finding our 'go' button to solidify the leg buttons that clearly confused her, again, while pushing her to the bridle.  I found the ride on Sunday a little more frustrating, but there was more expectation of both Sierra and I, and all things considered I think we stepped up to the plate and came away stronger, more confident, and with a ton of homework.  Following my lesson, I opted to hack sierra down the road to cool out but we were swarmed by gigantic yellow mosquito's and despite both being covered in bug spray, I decided to turn around.  Not only was she becoming irritated from them, it was the first time I ever had to 'push' her to go down the road; normally it's quite the opposite!  We wandered back home and I dismounted and followed a same pattern as the day before; hose off, liniment brace, and turned back out to finish her breakfast.

Overall, I am really happy with my purchase and feel the clinic was incredibly valuable both to confirm my thoughts and feelings on her training, have watchful, skilled eyes on the ground to coach me through some sticky business, and the confidence to continue with her.  It's incredibly hot right now so Sierra is enjoying some much deserved time off, but I hope to do some light hacks this week when the weather and scheduling allows.

Key Notes from the Clinic to Refer Back To: