I haven't written much about Kidd lately, and I apologize in advance for the word-vomit that's about to bless this blog.  This post will not be eloquently written or extensively proof read.

For those who need a refresher, most of my last posts revolved around Kidd's soundness (or lack of) and multiple visits with the travelling Performance Horse Vet who comes to our area every 4-6 weeks to try and determine, and correct, his issue.  In recent appointments, we isolated his Hocks and Stifles as problematic areas, so we injected both.  The next month, the Vet saw him and stated he was about 75% better - which she was really excited about.  As time went on, we started having some really major behavioral issues - to the point where as soon as I would get on, he would fly backwards, spin, and/or threaten to rear.  At a loss, I consulted an Equine Osteopath, who is also an Animal Communicator.  She lives about 10 hours away, so we did a distance reading and what I got back from her was confusing, and eye-opening, to say the least.  Overall, she felt as though Kidd had a 'parasite overload', so I consulted the travelling Vet and she shipped me the Panacur Power Pack.  Kidd was placed on that, followed by a dewormer which covers Tapes 10 days later, and another 10 days after that.  She also highly recommended a herbal blend from Dog Cross in British Columbia, as well as Aloe Vera Juice and Colloidal Silver to aid his stomach.  While I remained skeptical, after the 25 day regime, he seemed to return to normal.  He lost his big 'pot belly' and seemed much more at ease.  I worked him a few times and rode him as well and mentally, he felt like the 'old' Kidd, however he still didn't feel right in terms of soundness.

As Spring weather turned into nasty, wet, windy and cold days I didn't get much time in the saddle, but it didn't bother me.  Once we got through that weather and the days began growing longer and subsequently more enjoyable outdoors, I began working with Kidd again.  Unfortunately he developed scratches, which quickly appeared on all 4 legs resulting in some lameness problems as a result.  On his 'good days', where the swelling and lameness on his LF from the scratches was non-existent, I rode him lightly, but he still didn't feel right despite being on 1/2 Tab Previcox.  He still wanted to counter bend, be straight through the shoulder and ribs, and carry his hip to the inside when tracking to the right.  The left, which was always our good way, started to feel degraded as well.  Frustrated, I kept in mind the Vet's recommendation that he may just need to be re-trained to move correctly, and get stronger. I kept our rides short, simple and even though I secretly wanted to cry, I truly enjoyed the lax rides we shared.  I don't remember the last time I rode a few large laps without trying to micro manage ever second. Heck, sometimes I barely even maintained contact but it felt [mentally] freeing.

My last ride on Kidd, myself, my husband and 2 friends went for an hour long walking hack and 3/4 of the way along, we had a simultaneous herd spook at an invisible monster which left one person bushwhacking to catch his horse, and the rest of us laughing at our near miss.  Kidd didn't feel 'right' after that. He was tight and worried, but I thought it was just a result of the spook.  Shortly after, we turned around to head home, Kidd increasingly walked slower and slower, to the point that others had to stop and wait.  My concern grew, and upon getting back to my farm and untacking, I was sure to give him a thorough spray-down with Draw It Out Liniment, a massage, and a text to the Vet regarding setting up an appointment.  I decided not to ride him any more until we saw her, and in hind sight, i'm glad I did.  I don't think he hurt himself in the spook, I think he was already hurting and made it worse.

In the week or so leading up to the Vet appointment, I brought Kidd in and doctored his scratches daily.  While he developed them last year so I have dealt with them before, I had read from multiple places online recently not to remove the scabs, which I had always done in the past.  I figured i'd try leaving them this time.  Instead, I tried a variety of salves, balms and other items applied to the scabs to help and nothing made a difference.  He was uncomfortable with me touching them, so I decided when he was at the Vet I would use the warm water in the wash bay to soften and remove them. 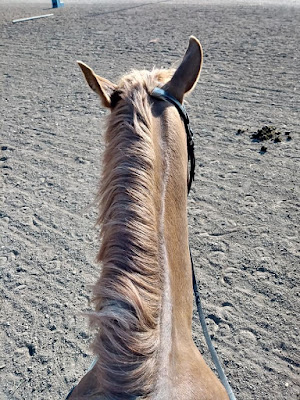 As the Vet Day slowly approached, my anxiety built and I began to consider the fact that I may not get good news. I may be told that my 8 year old horse is a strong candidate for retirement.  I tried to push the thoughts out of my mind as to not get ahead of myself, but they often crept into my brain and I would find myself laying awake, paralyzed in thought almost every night for a week.  1 week before the appointment, I pulled him off the Previcox so we could get an 'honest' review of the problem.

The week leading up to the appointment, I developed a viral 'bug' and decided to take a sick day from work on Friday, given that I had 2 separate Vet appointments (one to get V Ai'd, one to take Kidd and 2 other horses from my farm to the travelling Vet) and the timeline wasn't working well when the Semen shipment was delayed.  Regardless, my hubby came through for me and between the two of us we managed to get 4 horses to their appointments on time without too much standing around.  If there was ever a time I wished I had a 4 H trailer instead of 3, this was it! 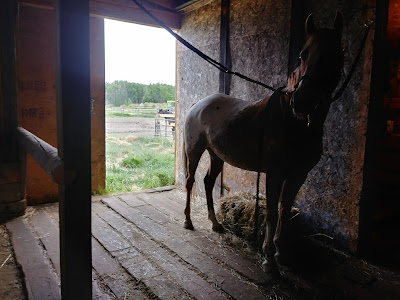 Immediately upon arrival, the Vet scolded me for not removing the scabs of Kidd's scratches.  I can't blame her, everything I tried wasn't working and my plan was to use the wash bay after his appointment and get them off.  She suggested if he require sedation for his appointment, we take a shedding blade and remove them which is ultimately what we ended up doing, followed by a thorough wash and dry.

Kidd's appointment was disappointing for various reasons.  First, we trotted him out and noted he was off on the LF again, likely due to the scratches - not a huge deal, and not something 'new'.  However, he was off on both hinds, also nothing new, but worse than ever before.  When we moved to the flexions, he was significantly worse than before as well, especially on the RH.  The vet watched him trot back and forth over and over again, muttering comments that I could barely hear but most of which revolved around "lower back" and "stifle sore".  We flexed the RH over his LH, isolating the stifle as best we can, and he was * very * lame afterward.  We decided to x-ray the RH stifle, and honestly, part of me was hoping we would see it blown apart, a big lesion, a chip, or something conclusive.  However, other than a little roughening and perhaps a little flattening in the inside of the joint, there was nothing glaringly obvious.  We were stumped, and I was disappointed.  My options were presented, which ranged from roughly $700 - $10,000, none of which were a 'sure thing' because we can't seem to isolate the problem.  I chose the cheapest option, which was injecting his inside stifles (again) and his SI (first time).  After the appointment, my Vet softly told me that I need to make peace with the fact that he may never be more than 75% sound.  He will likely be sound enough for the show ring, but he will struggle in training and I need to decide what's important to me (like that's even a question).  She also advised me that I could turn him out for a year or two and he might be totally fine afterward, but he already had almost all of last year off for the same reason, and we have even more problems now.  The big concern is the fact that he was on 1/2 a tab of Previcox and he still wasn't sound.  As bad as it sounds, I'm not made of money and I simply can't afford to take him to the University of Washington for a MRI or CT Scan, nor do I want to take him to Couhlee Equine for 2-3 months of rehab when we don't even know what we're rehabbing, or if it will work.  These just aren't economical, viable options for me when the idea of Horse Shopping is on the table. 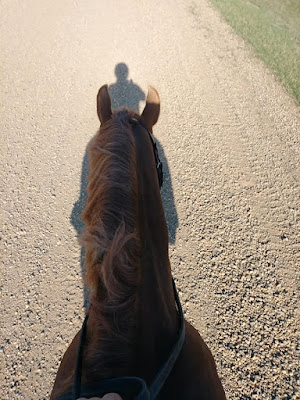 The next 10 - 30 days will be the tell-tale.  The Vet advised 10 days off, then lunge Kidd and see how he's moving.  If he looks good, I can get on and ride and see how he feels, as that's when I notice it the most.  While i'm not holding my breath, if this recent set of injections doesn't return him to the level of comfort he deserves, it is very, very likely that he will be semi-retired to the occasional light hack and future lead-line master.

I'm heartbroken, confused, and feel like I live in a haze most days.  I struggle immensely with the 'fairness' of this situation, but I recognize life isn't fair and sometimes no matter how hard you try, or the lengths you go to, some things cannot be reversed.  I hope that isn't the case, but time will tell.