Things got a little wonky this week and once again my Monday – Friday plan kind of went out the window, and with Christmas parties and what not it continues to be a bit wonky. On top of it all, we ran into an issue that caused my weekly plans to change for the sake of Kai’s health and comfort, but regardless buckle up for another incredibly rushed and poorly written blog post.

I had to go to the arena on Sunday evening as a friend/client wanted to do a lesson.  My plan was to go in on Sunday Afternoon and bath Kai prior, but I have been feeling run down so I decided to just brush, lunge and feed her before the lesson.  She had a few days off and we have had a pretty severe weather change (warm!) as a result was feeling a little fresh.  My intention was to lunge her lightly just to stretch her legs and get her a bit of exercise, but she saw it as a great opportunity for play time. As she bucked and played, I was torn between reprimanding her or letting her ‘get it out of her system’. I was only lunging her in a halter after all.. when she is tacked up, I typically don’t tolerate that behavior, so I decided to let it slide.  After a few minutes, my friend/client “T” watched and quickly followed with the question “Uh… is she always like this?!” so I explained yes… she’s a bit nuts lol.  She got a bit of a sweat on her, which is typical and stood fairly quiet while I taught T’s lesson. 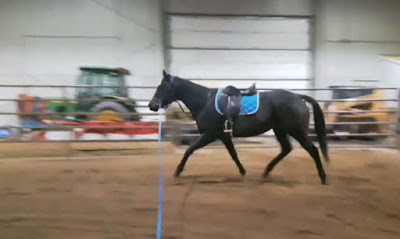 Monday I was continuing to feel run down and crappy but I pushed myself to go to the barn. I struggle with paying $15/day for her to sit in a paddock, so I try to get the most out of my money.  I caught Kai and brought her into the arena and tied her up. I noticed she seemed agitated; didn’t want to stand still and wasn’t being particularly trustworthy while tied.  I brushed it off, and continued on with my plan to lunge and hop on to cool her out.  I noticed when I groomed her, when I got to her back/hind end she seemed guarded; cocking a hind foot nearest me despite me switching sides.  I took note, but chalked it up to a cranky mare getting tired of this new routine.  Our ride was uneventful for the most part, albeit brief.  Following lunging her, I worked on standing quiet at the mounting block before getting on, walking a few circles, and dismounting.  I took note that she was getting increasingly less patient at the mounting block, and was fiddling with the bit during the process.  I was feeling a little confused, but again just told myself she’s probably just ‘over’ this new routine and would much prefer to just sit in a field and eat.   I can’t say I blame her, but I told myself tomorrow is a new day.

Tuesday I brought Kai in and she was still agitated while tied and even lifted a foot at a younger girl walking past carrying her barrel saddle. She was dragging her cinch so I noted that she may have just been ‘worried’ about the strange noise be hind her, but regardless I growled at her and subsequently confused the girl.  I took Kai into the arena and lunged her at the far end.  She was * excellent *, the best she’s ever been. She was so relaxed, responsive, focused and her movement was so fluid and rhythmic.  As I stopped her to change direction, the scarred little barrel racer came into the arena and passed Kai a few times.  Kai is learning not to get too worried about other horses working around her, but when she trotted (fast) behind her and passed her, all hell broke loose.. my bucking, leaping, pulling monster was back.  I pushed her through it, gave her heck for goofing off while fully tacked and ended up working her a little harder than I would have liked but regardless our lunge session ended on a good note.  As per usual, I prepared to get on. She was particularly anxious now, and like Monday was reluctant to stand patiently and quietly at the mounting block. I mount and dismounted 4x as a result.  The 3rd time I mounted her, she fell onto her knees. Not only did my self esteem take a knock, but I was really confused.. was she hurt? Did the deep sand cause another tendon issue? Regardless, I stuck it out as she hopped back up and petted her and dismounted again. I checked her legs and didn’t see anything unusual, so I mounted again. This time she stayed on her feet although did take a step sideways as I swung up. All the while, barn staff eagerly watched, waiting for the rodeo to  happen.   I asked her to walk on, and she was walking kind of oddly; very springy but also felt very unsteady.  I asked her for a trot and she leaped into it which was accompanied by some head tossing and excessive tail swishing. I decided not to push the envelope as she was feeling very ‘goosey’ so I did some halt transitions and dismounted.  When I got out to the cement pad to tie and untack, my halter was tucked behind a young horses bum. I walked past the horse and asked him to move over so I could grab my halter, where he was quick to cock a foot and threaten to kick. As I reacted to move Kai, she took note and flew backwards, which resulted in her shoes slipping on the cement.  Of course, the young barrel racer we previously scared was standing right behind her, gashing another scar into her brain and most likely officially labelling Kai and I as “those crazy English people”.  I know shoes on the cement didn’t help her, but why was she being so clumsy? I untacked and pondered the ordeal as I brushed her, trying to ignore her grouchiness as I brushed her back, ribs, flank and hind end.  This was unlike her, was something wrong? Maybe not.. maybe she’s just not the right horse for me.. maybe this was a bad idea.  I did some stretches while I continued to brainstorm excuses and a reluctance for my legs to carry me upwards from a lunge had a lightbulb go off; her legs were tired from the deep sand; shes got wet noodles for legs after the excessive exercise on the lunge in the deep sand.  I felt relief wash over me, and finished my evening at the barn relieved that something wasn’t seriously wrong beyond an out of shape horse being over worked. Thank god!

Wednesday was Roping Night so I knew I wanted to be in and off before the cows came inside.  Like last week, they were ran into the alley just outside the door in the ‘scary corner’ but I expected her to work through it.  As I brushed her, she was still grouchy about me brushing her. Now it was standing out to me a little more, and her back almost looked a little ‘raised’ behind her shoulder blades. Her topline is still really lacking, so I presumed to have put my saddle a little too far forward in the previous days, so I positioned it a little further back and carried on. Kai lunged well, and today I wanted to lunge less and ride more given her rubber-leg issues the day before.  Knowing I’m not riding her ‘hard’ as most of the things we need to do can be done at a walk, I figured this was a safe bet to avoid the stumbling hot mess she became the day prior.  I got on and rode her around at a walk. She was forward and a little springy in her walk, but otherwise seemed ‘fine’.  I asked my friend “C” to take some video for me, and as she got positioned I asked her for a trot. She leaped again, shook her head, wrung her tail, and felt lame. Huh. I tried again. And again. And again. I managed to get a few strides of half-decent trot work, but it certainly wasn’t anything beyond trash can material.  Luckily, a chiropractor I have used in the past was riding a baby as well so she watched on, along with seemingly everyone else in the barn.  After 10 minutes of seeing if she was just being a sassy baby, I decided to dismount. Given her reluctance to me touching her back, her raised hair and pissy behavior, I checked my saddle. It had slid forward, and was digging into her shoulders; I couldn’t even fit my finger tip under it. Frick.  I talked to the Chiropractor as she was dismounting at the same time, and we agreed to adjust her once she cooled off; to rule that out.  I took my saddle off and sure enough, she was swollen behind her shoulders. My saddle was too wide, and sliding forward and digging into her shoulders.  The chiropractor also found her neck/poll was incredibly messed up, so we adjusted her, stretched her, massaged her, and looked forward to Thursday, but not before torturing her and making her watch the Team Roping – boy was that scary.
Thursday I decided to take a coffee break from work and run to the barn to feed kai her grain. I’m trying a product called “Perfect Prep” and it has to be given at least 1 hour before riding. I ran over there at about 2 PM, and I get off work at 3:30.. when I returned to the barn after work, she was trotting around in her pen like a lunatic. So far, it wasn’t having any effect, but I took her inside to brush her and potentially ride depending on if her back was sore or not.  The walk inside was interesting, as suddenly everything was terrifying.  Unfortunately, when we got inside things weren’t any better.  Monsters were every where, and ever little noise was sure to eat her.  The arena was empty, so I turned her loose in the arena and encouraged her to move around since she still doesn’t seem to ‘get it’ and just stands at the gate or weaves.  She was reluctant to go forward, but did play a little under my encouragement.  Hoping she had burned some energy, I tied her back up and started brushing her.  She still seemed agitated and full of herself, and I noted her back was still quite sore, so I gave her a massage, and decided to turn her back.

Today is Friday and we have a Christmas Party so unfortunately I will be skipping the barn, but I still made it to the barn 5x to work with her which is okay with me at this point.  While I feel like nothing was accomplished this week in her training, I have learned more about Kai and it comforts me to know how uncomfortable she was and though she was ‘bad’ in some regards, she could have been much worse.

Moving forward, I am going to keep her on the Perfect Prep for a few more days and I am also going to incorporate AFX into our routine as her girthy/flank sensitivity has me a little concerned.  I don't know if I have much for 'things I learned this week' besides needing to narrow my saddle (thank god for the Genesis tree!) and that cows are scary, but I still feel relatively satisfied with the week! 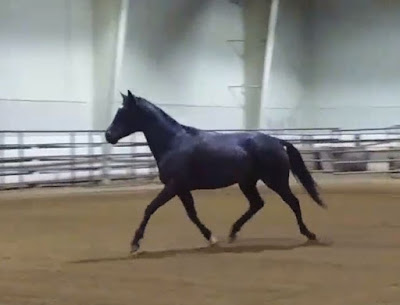