I was holding off on an updated Blog Post until *all* my horses were home, but that seems to continue being pushed further and further into the future, and Kidd is a super pony and deserves a shout out. I'm sure he checks my blog in his spare time, and he needs to know he done good.

A 'new girl' has moved to our area from Calgary (Alberta Horse Central, FYI) for the next 2 years and her 2 Hunter/Jumper horses are remaining in Calgary until Circuit Finals are over, and she was itching to get her boots dusty so I offered Kidd to her.  Lately I have been far too busy to ride, the kiddlett needs the exercise and hey, free jump training since that's not *really* my forte anymore!

So "T" intially reached out to our Sport Horse Club on Facebook inquiring about English riding in the area and we quickly became friends.  I wasn't sure what to expect when I invited her to our new farm one evening, and though i'm sure she was feeling similarly as she pulled into the driveway, she watched me coach a lesson as she brushed Kidd and got to know him.  He hadn't been ridden in a few months and upon showing her his tack, she swung a leg over and started feeling him out.  Much to my surprise, and contradicting what I had just said not 20 minutes prior, shortly after picking up the Canter Kidd started crow hopping and attempting to buck.

I thought.. "shit..." but she stood up in her stirrups, pulled his head up and transitioned down to walk.  I thought "crap.. she's never coming back now!" but to my surprise, she picked Canter right back up and tried again and they continued on without trouble. I honestly think Kidd was giving more of a
'wahoo!' type reaction, and she noted that.  They finished off the ride, and she commented on his lovely Canter... when he wasn't crowhopping lol!

I could tell she was a little nervous - who wouldn't be just meeting someone and riding their horse in front of them all in the same day - but I assured her, I truly don't feel like she can 'wreck' Kidd in the 20 minutes she's been on him. I advised her to ride him as if he were her own horse, and not to worry about me judging her riding ability.

Luckily for me, she came back and rode him again.  By now she was feeling a little more comfortable around me and rode him a little harder and with a little more expectation.  She commented on her lack of flat/Dressage knowledge, and how he has so many buttons that she's struggling to figure him out.  It really didn't help that he was upset about being alone from his buddies that day so he was being a bit ignorant but I chose to let her just work through it.

Honestly, I didn't think he had a ton of Buttons but perhaps it's because i'm used to him and vice versa.  Regardless, with a few quick pointers she had a lovely ending to her ride and she even schooled a few fences.  By this point, I had offered for her to ride him in the Jumper Jackpot on September 9th, but we had decided she would jump school him a little and go from there.

The next time out we set 2 fences and she noted his greenness to fences, but the fact that he's solid on the flat really helped however he does need a lot of support to stay straight, know when to jump, etc.  We agreed the following ride we would set a course and she could attempt to put it all together and decide from there what the Jackpot plan was - if any.

The following ride was with the purpose of Jumping a full course and decide if they were going to try the Jackpot or not.  They did some courses and worked through some technical exercises; all of which Kidd really stepped up to the plate for!  His greenness continued to show, but he really tried. He jumped a variety of heights to a maximum of 2'6 which was more than enough for an out of shape potato like himself.

I noticed he seemed to tweak something in his hind end following the jump school as he was standing with his tail cocked to the side, and was tender upon palpation. I couldn't feel anything really out of alignment, so I assumed he strained a muscle in his right hind as he could barely lift the leg to be stretched.  That being said, when I went to walk him back to the pasture he walked off stiff but then warmed up out of it after a few steps.  Was Kidd tying up?  Hmm.. In the back of my mind I questioned if he would be sound the next day, but decided grazing would be one of the best options for him at this point.

Due to hosting the Jackpot at our new house on Saturday, hubby and I were outside until nearly midnight every night preparing, and as such I wasn't able to check Kidd for soundness following his jump school.  However, T and I had agreed we would give him the Friday off so he was fresh for the Jackpot on Saturday, and boy was he...

On Saturday Morning the horses were way at the back of the Pasture and I was feeling generous so I asked hubby to go catch Kidd for T, as I was busy and she was helping me.  I continued on my way, and was left perplexed when I saw all the horses come galloping up to the front of the pasture - Kidd, wearing a Halter - and hubby nowhere in sight.  Shortly after he walked up and I was confused, but continued adjusting fences for riders warming up for the Trot Poles.  Shortly after, hubby arrived and snagged Kidd and walked him up to the arena and asked me to hold him for him to get on. I was still confused, so I asked "why?".. To my utter shock and surprise; Kidd bucked him off. What?! Honestly, Kidd has NEVER bucked in his life.  He's crow hopped; he's scooted; he's bolted and he's ducked... but NEVER bucked with the intention of getting someone off.  That being said, I really haven't ridden him bareback a ton because he has such a sensitive back and it seems to bother him.  So that, paired with the fact that as soon as Ray got on him all the other horses took off, Ray ate dirt for the first time in over 10 years.  His ego was bruised and he had a sore hand and foot, but he survived.  He got back on and Kidd was wide-eyed and spun in circles as I tried to hold him and I was honestly blown away at this behavior. Could it be that his hind end bothered him? After what felt like an eternity, he relaxed and hubby said "i'm good" and I let him go. He walked him around and then got off, all the while T looked onward with a nervous look in her eye.

Upon dismounting, I asked my hubby to trot him out; that hind end strain still lingering in my mind.. but, he trotted sound and we handed him off to T to tack up and get ready. I advised her to give him a really good warm up, especially in trot just going large. It was colder that morning, and Kidd was quite distraught-looking still.  She agreed, and I got busy setting up for the Jackpot and checking riders in as they arrived.

The Jackpot got started with Trot Poles, which T elected not to ride in. Honestly, I kind of hoped she would, but I can understand that a person of her showing calibre may find it boring and pointless. Nevertheless, she was the one paying for her entries so I wasn't going to tell her what she needed to ride in. She entered Cross Rails, 2'0 and 2'3 with the intention of scratching the 3rd class if she felt the need.

Though she was schooling 2'3 - 2'6 in the Warm Up, she did decide to scratch the 2'3 class after 2 successful rounds at Cross Rails and 2'0.  T felt as though Kidd had really settled, jumped well, and was well in-tune with her and she didn't want to push her luck.  I agreed that it was the right choice, mostly because that right hind is still in the back of my brain, and chose this as the time to mention my concerns regarding it.  I requested she give him a really good cool down and she agreed she would.  Sadly there wasn't really anywhere to cool out, so she decided to hack him in the hay field.  She returned about 30 minutes later saying he absolutely loved it and she untacked him and put a cooler on him to continue to hang out and cool down.  I could have hugged her when she asked me if I had mineral ice or anything to put on his legs; of course, I didn't because it's at my in-laws farm still, but I was so happy she really took my concerns to heart. 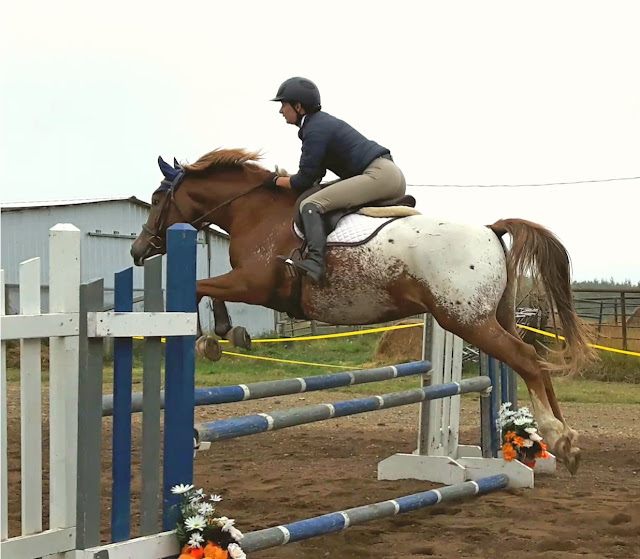 Wrapping up the Jackpot, T & the Whizz Kidd pinned 2nd and 3rd and even made a little money. For only a handful of rides together and jumping in with both feet into a Competition I couldn't have been more happy with how Kidd stepped up to the plate, and how well T piloted him through it all.  Over the days of getting to know each other, she has eluded her lack of confidence and inability, or lack of ability, to figure out new horses. To be honest, I really appreciate that.  I appreciate how upfront and straight forward she is and I think she's done wonderful on Kidd under the circumstances.

Moving forward, our big horse show is the 22-24 and though Kidd will be staying home, I will be ran off my feet - but lovin' every minute of it!  I would like to get him vetted and i'm entertaining the idea of injecting his troublesome stifle that's bothered him for years, but with Kai continually brushing with death it's not in the cards (ie wallet) at this very moment.