I had a feeling she was going to be a total snot based on how she behaved on Farrier Day (Sunday), so I decided to go out an hour before I planned to load her to give her 30CC of Omega Alpha Chill.  I decided to give her another mouth full as we put her on the trailer for good measure. Much to my surprise she was lovely to catch, and walked right onto the trailer.  We headed into town and had a few stops to make before our appointment. I repeatedly told my Hubby how much I hated this because last time she basically trashed my trailer..... Ok i'm being dramatic, she just frayed by trailer tie, but I didn't want her in there any longer than she had to be.  To my surprise, she stood great and was quiet through both stops. 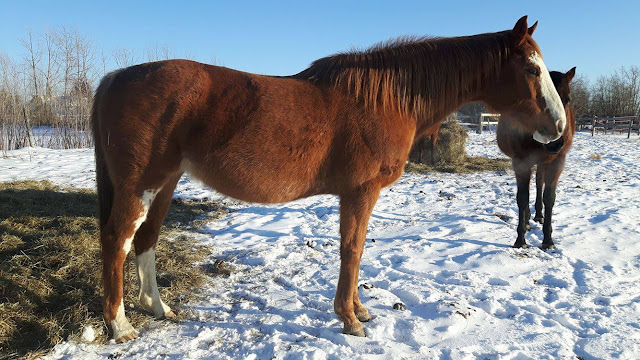 We made it to the Vet Clinic and Hubby offered to unload Nikki while I ran inside to meet the new vet and 'check in' so to speak.  One of my really close friends works there, so we chit chatted back and forth while the Vet got ready.  We were quickly faced with a major problem; earlier in the day someone backed into their overhead door, which is the only safe way to get a horse inside, and it would only raise about a foot off the ground and there was no way to manually lift it.  Seems ridiculous for a mixed practice clinic, right? Worry not, since being bought out by a new Partnership, they are already drawing up plans for renovations and additions.. I'm hopeful that this includes an alternate route inside for horses.  I headed outside and found Hubby walking Nik around. I was sad to see she was pretty sweated up and shaking a little, but she was doing her best to be a good girl.  I filled Hubby in on the situation with the door.  At this point, the Clinic's game plan was to wheel the ultrasound machine to the nearest door and they would just do her outside.  This made me nervous, because i'm sure the new vet values her Knee Caps, plus it's about -10 which doesn't go well with wet things, and if you think the Duck Bill at your doctors is bad, I got WEAK in the KNEES when I saw the horse version.. but more to the point, imagine that in -10 weather... No thanks.


At this point, I was thanking the Gods above that Nikki was a race horse, because I offered to take her through the Cattle Chute (what? lol).  Luckily, she walked quietly through the filthy cattle chute which is intended for calves, might I add, and is quite dark and narrow, with rickity old poop covered boards for footing.  Ray lead her through as I brought up the rear, because if she panicked half way through our only hope in hell was sending her forward.  As I watched the boards bend and shift under her weight, the once white sides grazed her belly. She got to the end of the dingy tunnel and was forced to make a hard left and shimmy her body around a square corner (this makes sense in my head).  YES, she was inside, now to make our way past a labyrinth of cattle chutes and squeezes and into the horse section of the clinic... Thank God for Race Horses.


Finally, we make it inside and I got to meet the new Vet.  She's not permanently here, but the Partnership that bought out our local clinic sent her up to fill in for another Vet who is away on Holidays.  Luckily for me (and everyone else in this area), she is an Equine Specialist and just finished her Internship in Equine Surgery.  She was young, confident, and welcoming.  She's only been here a few days, so together we fumbled our way through using the Ultrasound Machine, which she called 'ancient' to give you an idea, and got down to business.  Not that I am surprised, albeit a little teensy bit sad, Nikki is not pregnant.  Nevertheless, we continued onward with the appointment and switched our focus to her 'date' later this spring with Cherokee Country. 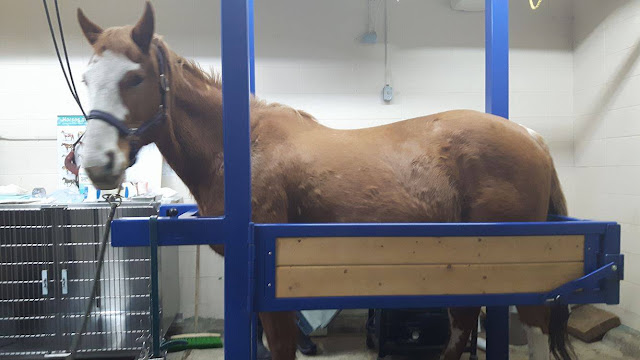 I brought up the findings at our appointment last year, which to summarize, basically state that Nikki is 'overactive' on her left side, and 'under-active' on the right in terms of her Reproductive tract.  I'm told this isn't unusual, as long as that 'under-active' side is at least slightly active.  Some mares only ovulate on one side. Who knew?  Anyway, the over all health of Nikki's reproductive system looks and feels great.  She said conformationally, she isn't great.  At first I was a little taken aback because I thought she had pretty darn good conformation, especially for a Thoroughbred...  She must have seen the look on my face, because she quickly caught herself and told me she was referring to the angle of which her reproductive system sits.  It's a little more angled or 'tipped' than she would like to see, and this can often lead to pooling, which can cause infection.  That being said, she found no signs of this throughout the hour-long appointment, and as such is confident that it wont give her any grief given her age.

Upon checking her Ovaries, we found they showed no change in terms of their activeness, or lack there of, from last summer.  She had a large (40MM) Follicle on the left side, which posed some concern for the Vet because we had discussed that last year when scanned she had a 38MM Follicle, but I teased her for 11 days straight and she showed no signs of heat.  So we were left with the question, is this a Follicle, or does she have a Cyst that has grown 2MM since last summer?  Oy Vey..

We carried on with the exam and found there was some healthy fluid in the Uterus - Ok, got it.  Then, the Vet pulled out these HIDEOUS, CRINGE-WORTHY AND DISGUSTING LOOKING things that are basically a supersized, stainless steel version of a Gyno's 'Duck Bill', AKA a Vaginal Spectrum, and took a look at her Cervix (which was super cool BTW), and as the Vet said "For lack of a better term, it's floppy and soft". Ok, got that too. But seriously... this thing.. was like the size of my arm.. I will never complain about a Pap again...

Carrying on, in conclusion, based on the 'floppy cervix', the 40MM Follicle and the fluid in the uterus, all signs point to her nearing the end of a heat cycle.  With the thought of a cyst rolling around in the back of the Vet's mind, she again came back to another concern - how early it is for a mare to be cycling in our area.  While I don't disagree, many of our mares have shown heat symptoms for the past month, so while I realize light is a massive factor, the Vet and a Reproduction Specialist who I am friends with think the unseasonably warm weather and the fact that we have a stallion on site and she's turned out with a gelding could in fact have the mares cycling sooner than usual.  As a result, as an example if we were AI'ing, she wouldn't recommend breeding her on this cycle.

Regardless, she gave her 2 Thumbs Up and said she's in fantastic health and condition - she couldn't believe her age by just looking at her.  She really liked her (except for when she had to draw her markings on the Coggins paper - c'mon, do you blame her?) and said because it's a young stallion with good semen and it's a LFG, to take her down and breed her.  She said Cysts in the ovaries are very, very rare and there is essentially nothing to be done besides full retirement if that's the case.  Subsequently, I could take her back to the vet for a re-scan as if it is a follicle, it should be released in a few days, but the simplest way would be to tease her with our Stallion - however he's currently still in his 'winter pen' which isn't set up for teasing mares... so we will just wait.  Regardless, she seemed very comfortable with just breeding her in May, because there isn't much to lose otherwise.  As well, if it is a cyst, it won't affect her ability to carry a foal, it just makes it harder for mares with them to get in foal.

So for now we wait, track her cycles, and she will head down south at the end of April or early May, depending on how her cycles fall. 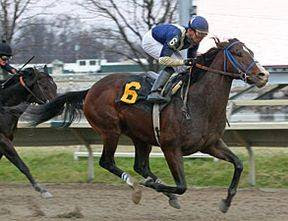