The Depths of My Cold, Black Heart

As I scrolled through recent photo's posted on Facebook of a Jumping Event in my home town, I found myself over run with ridiculous judgement.  Like, ridiculous judgement. Okay, some of it was probably warranted, but for the most part, I was being incredibly b..... 'witchy'.  "Jeez 90% of the Riders saddles are about 5" too far forward, those poor horses shoulders!" "Man, look at her thinking she's all that when she can hardly ride" "Holy, how about you jump with your horse not for it?" and the list went on........  Alas, just as quickly as I was overcome with something I didn't even know I had in me, I told my inner 'witch' to settle down and get back in her dungeon and as I dismounted from my high horse and I was left questioning my sanity.   At what point did I become drown in such negative emotions, and what qualifies me to be so judgmental? Really, what qualifies anyone?  If there's anything that bothers me more, it's people who are cruel to those who are trying their best with what they have, and while I realize that's incredibly contradictory at this point, it's the honest truth, so bare with my self inflected bullet wound to the foot.  Regardless, i'm still shocked and incredibly disappointed in myself for allowing my mind to wander that far into the depths of my own struggles of clashing personality traits... but hey, I'm human.. I think?

I feel like a large part of the reason this subject is so 'sore' for me, is because I was once the person on the receiving end of such insensitive and mean acts.  I was blessed to have some fantastic horsey friends as a child, and we were inseparable on our horses.  That being said, within our trio I was the least 'privileged', and that's not to feel sorry for myself but just a simple fact.  While we all had our share of hardships, and none of our parents were truly 'horsey', mine was the least involved.  I was raised by a single mother who worked for not much more than today's minimum wage.  She worked tirelessly and she put all that she could into my desire to ride as well as my older brothers love for Hockey.  As i'm sure you know, these are both very expensive sports, so you can imagine the struggle she must have went through.   My mother is a very proud woman and she never let us know the financial burden our passions caused, and quite frankly I'm certain that even if she had, it wouldn't have registered in my young mind.  Now, being an adult and responsible for funding my own passions, I can only imagine how tight finances must have been for her, but she gave it her all in order to allow my older brother and I to do what we wanted. 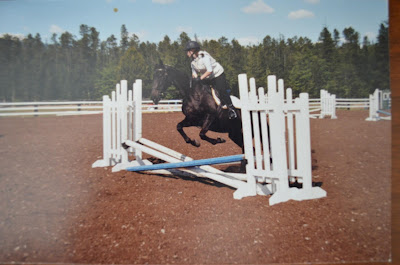 While I now have mostly high-end, expensive tack & apparel, I got to this point through years of buying & selling, saving & selling. 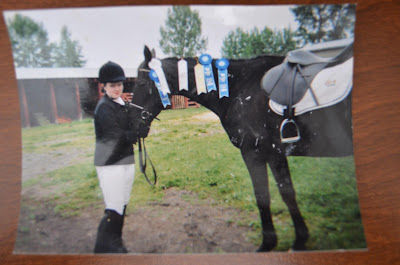 My first saddle cost a measly $50, and had nails sticking out of the pommel that my sweater would regularly get caught on. I had 1 saddle pad that I bought at a Used Tack Sale for a whopping $2, and all it's billet and girth straps had been torn off so typically, I had to get off at least once per ride and pull it back up under my saddle as it attempted to slip out over my mares bum and into the dirt.  In hindsight, it would have been less likely to do so if my saddle fit properly, but I had no concept of that back then.. and even if I had, there was no chance in hell I was going to be able to buy one that fit well. My bridle & first bit also came from the same Used Tack Sale, which I paid $15 for.  I also had a flaming red girth that was given to me by the BO - probably out of pitty - but we rocked it!    As time went on and I was able to do odd jobs to make some money to fund my Tack Improvement Project.  While i'm sure i'm not alone in feeling relatable to the 'rags to riches' stories, the moral is never judge someone who's doing the best they can and working with what they've got.  While, on the flip side, I am regularly judged about my 'expensive, lavish taste in tack & apparel', I worked HARD for what I've got.  Everything I have, from my Horse Trailer, to my Tack, to my own horses, were purchased with my own money, and it didn't come easy.  It was only made possible through methodical budgeting, pinching pennies where ever I could/can, and i'll be damned if i'll let someone make me feel guilty for my hard work to get to this point.

So why did I allow myself to judge someone who's out there working hard with what they've got access to right now? After all, that was once me, and it really wasn't that long ago.  While I briefly fell victim to hatred and abuse, i'm grounded and reminded how cut throat and cold hearted the horse community can be.  While I was able to claw my way out of that mind set, many are comfortable there.  Really though, as a group of individuals chasing the same (or similar) dreams and aspirations, how do so many of us develop this self-righteous entitlement that allows us to belittle our fellow equestrians?  I personally feel like there is a fine line between Incompetence and Ignorance in the horse world, and while there are many people who don't fit into either mold on a consistent basis, these two traits make up the majority of the Equine Community, and awareness is the key to improvement. 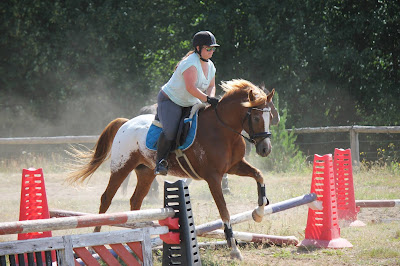 An Incompetent person is simply a person who hasn't been nurtured enough, or correctly, to grow and develop.. The great thing about fitting into this category, is the sky is the limit!  While it may not be 'easy' due to a variety of reasons such as financial ability, ease of access, etc, there is always hope for improvement with a good support system and a great coach.  Sometimes these can be found in your own back yard, and often they're not hiding behind a piece of paper or an extensive show record, so you have to learn to read between the lines, and as I mentioned in a previous blog post - ALWAYS draw your own conclusions.  The incompetent people are often like sheep, continuing to do something because everyone else is doing it, so it must be right.  Even as that person, you have to be able to step yourself out of the equation and look at your situation as a whole.  Perhaps you're working with a coach and you're happy with them, but when you look back over your growth over say, 6 months, 8 months, or even 12 months - have you improved?  Has your horse improved? Are you still working on simple concepts you were working on 6 months ago?  If so, is your coach taking necessary steps to explain things differently or take a different approach since it's obviously not working the other way? Again - ALWAYS draw your on conclusions.  Don't follow the herd, because they do the same thing every day until their card is punched.  If you're feeling like a fish out of water, but motivated to learn to swim, you're probably an Incompetent person.

On the contrary, an Ignorant person, to put it plainly, hasn't a snowballs chance in hell at improving until they step outside their tiny, boarded-up little brain, and accept that they are not the answers to life, nor are they gods gift to the horse world.  Again, you have to be capable of reading between the lines because often these are the people who are the first to say [and always with confidence] that life is really, really hard.  As well, these people will never truly own their own problems, but instead cast it upon others like a Monkey flinging poop.  If you're still confused about the Ignorant people in the world, picture this... They're in their small, dark closed off cage in their own brain.  There's a door to get into this little cage, and the key is in their pocket.  They grow, as all people do, but eventually they become too big for their little cage, so they are now crippled and crooked.  Surrounded by darkness, they become frustrated and begin casting blame on others for making their cage so small, but they are so encased in this game of blame and hatred, they don't realize the key has been in their pocket the entire time.  Now typically, these people eventually get bored of feeling sorry for themselves and miraculously find the key. At last, they're able to rid themselves of the confinement of this small cage, and step out into the darkness.  Standing up tall, stretching their decrepit soul they breath in the freedom that was always available once they pushed past their natural 'woe is me' tendencies and accepted their Incompetence.  If you're feeling stuck and like you're constantly fighting the same battles with very very little improvement, you're probably Ignorant.

But no matter what you are - its OKAY.. Tell yourself that 10 times as you pull up your boot straps to trudge on (Incompetent People) or wallow in self pitty (Ignorant People). It. Is. O. Kay.  But now what? 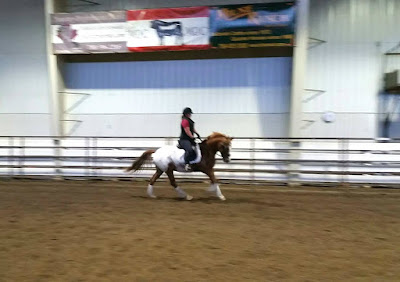 While I briefly fell into the nasty spiral of Ignorance yesterday, I drug myself out of that hell hole and brushed myself off.  Awareness is the first step in improving yourself personally, and as such it will improve the equine community you belong to AND as a whole.  We are so quick to break each other down, when we should be working together to pick one another up.  Ask yourself, which 'club' do you call home, and how has it been working out for you? 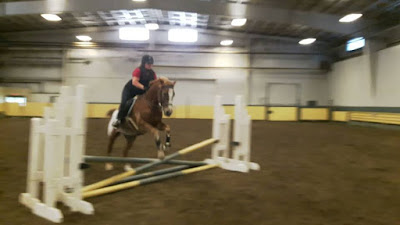