Recap and Reminiscing on 2016

As I mulled over my morning coffee I found myself scrolling through Shelby's blog (which I absolutely love) and developed motivation to do a blog post.  If you haven't already seen it, check out Milestone Equine's blog - she's incredibly inspirational.. and Canadian!  Last night, a good friend and I had a long, drawn out chat about the ebb and flow of our horsey endevours, and paired with Shelby's moving words I found myself reflecting on the challenges and accomplishments of recent years with horses.

In taking this winter off from riding it has allowed me to reset my mind, body, heart and soul.  I like to think it's doing the same for Kidd but he's just so dang cute I find myself with hearts in my eyes and a fluttering heart when I go out to the pasture to check on him and forget to take into consideration how he may be feeling (besides Hungry, because he's always Hungry even with full access to a round bale).  For the most part he seems really happy, albeit a little bored these days. 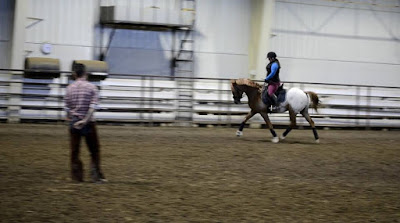 Kidd and I started the 2016 season strong.  He was training better than ever. So much so, that I started to feel a little lost as his pilot.  I felt like he was advancing far beyond my capabilities at lightning speed and I felt like I was grasping at his tail hairs, getting drug behind him in the attempt to keep up on a daily basis.  Every day he felt better, stronger, more capable. Then, I got greedy and it all went down the tubes.  At the beginning of April he was starting to show behavioral signs and while he was still performing fabulously, he often felt disconnected emotionally. The tension was growing throughout his body and his back was becoming incredibly tight. It started with just a simple head toss and over the span of 2 months the nasty, fire breathing dragon reared its ugly head and I had a bolting hot mess on my hands. Like an idiot, in the early stages I pushed onward, convinced I could train it out of him.  In hind sight, I knew better and I just got carried away in feeling like I was the queen of the mountain.. turns out, it was shit poop mountain because in what seemed like a chaotic landslide, all those advances were slipping away. I was left with a miserable horse with emotional baggage.  I've owned Kidd since he was a yearling; done all the training myself and never once had I allowed myself to put him into a situation where he might develop problems at my own hand.. until earlier this year.
In the Spring, our first show was set for the final weekend in May. I had my sights set on debuting at First Level, a huge accomplishment for Kidd and I. Competing at First Level would mean that in terms of a show record, this is the furthest I have advanced a horse on my own from start to finish.  I was willing to risk him bolting mid-test as my brain was still set on winning and being the best we could. I was focused on proving our doubters wrong and lost track of everything else. Nothing mattered except rubbing people's faces in Kidd's gold laced, worthy, warm and steamy manure.  We were gonna show them!  Ha....

Sadly, one of the instructors I ride with came up on the Friday before the show to give myself and my good friend a final lesson and upon bursting into tears of frustration, she got on and nearly got majorly hurt at Kidd's control (or lack there of). This was the final straw. He had officially become dangerous.  On that day, he didn't care about keeping anyone safe and I whole heartedly believe in the past he wasn't *trying* to injure me.. but on that day, he meant business. He had had enough and he was making it incredibly clear.  At my coaches suggestion, I scratched from the show. I felt defeated. I felt more lost than ever. I felt heart broken.

Time went on as it always does, and after another month of bolting, frustration and buckets of tears I began the process of Trial and Error.  If you're a horse person, you have probably been through this process at least once in your life and i'm sure you know, it's a lengthy one.  I started in the common areas.. time off, trail riding/hacking out, shorter, simpler riders, chiropractor, ulcers, thermal imaging, analyzing his diet and making changes, teeth, tack and my own body alignment.  I knew that my saddle wasn't fitting him as well as it had previously due to the big changes his body made over the 15/16 winter and after some thought and the advice of multiple people I decided not to try and make it fit and to just sell it and buy something that does.  I had been previously saving up money to hopefully travel south in the next few years with him, but decided to take that money plus what I sold my saddle for and purchased a new one.. I can't say for certain what improved things or if it was a combination of things but slowly we began to make progress. The bolting was getting less frequent and I was becoming more self-aware of my body alignment and how it influences him.  By August the bolting had seemingly diminished, but unfortunately as did his fitness and strength.

While I didn't know it yet, I felt that on top of all the other things in the Trial and Error process, we stopped having fun.  Greed got the better of me and I pushed the envelope.  Imagine a Clown Car door opening up and 50 Clowns burst out. That was our Envelope, except the clowns were chasing us all over Hell's half acre to do God knows what.  It was wide open and I didn't know how to close it. I was at a total loss - similar to when you became scared as a child and hid under the covers plugging your ears and cramming your eyes shut so hard you're seeing stars.  So, I decided to back off.  We kept rides simple, straight forward, and easy.  We hacked out. We did ground work.  And we did it sporadically.  There was no schedule to follow, no plans that we mustn't stray from.  It was just me and my horse.

We went to a show at the beginning of July and although we did have 1 bolt, it was a spook plain and simple and I couldn't get too upset with him.  In Training Test 2, we had a break in our Canter stride due to me riding too conservatively and we still managed our highest score to date.. I was seeing a slight glimmer of light at the end of this long, dark, scary tunnel.  So in August, we ventured 12 hours South West to my home town in British Columbia for my best friends wedding.  Most of the Bridal Party grew up riding together, so we all brought our horses to the Brides acreage for a 2 week stay.  I nearly left Kidd at home because I was embarrassed of what we had become.  For so long we had been so good. I was proud to have come so far with Kidd and for the first time in my life, I was the most advanced rider in my home town click.  I was dreaming all year of showing off our skills and letting all my friends take Kidd, the Wonder Pony, for a spin.  Notice all the "I" statements in that?  Hindsight is 20/20 they say, and horses have a funny way of humbling you.  If you know me, you know I would die inside if you thought I was bragging about myself and Kidd but this is the person I had become.  Greed is a nasty thing.
Regardless, as best friends do they all assured me they didn't care if we could do zig zag half passes in Canter, flying changes or other fancy maneuvers.  They just wanted to see me, and Kidd, and have fun together.. and boy, did we.  That trip was a saving grace for Kidd and I.  We hauled to so many different facilities, did so many different things and had an absolute blast every time.  There was no more bolting and I genuinely felt like I had my horse back.  I had a new look on life and I was so grateful for the stage we were at.  After 2 weeks of a wonderful time, we went home and looked onward to the Fall Finale in October.

I decided to stick with Training Level as Kidd wasn't strong enough to tackle the changes in First level and I wanted to end the season on a good note.  Despite overcoming massive issues, I still had my eyes set on the Championships and though I'm still feeling a little defeated that I missed them by a very narrow margin, I am happy to have finished the season successful.  We won the Training Level Developing Horse Award and missed the Overall Developing Horse High Point by a mere 2 points and therefor ended up Reserve.  We also missed the Overall Training Level Championship by less than 1.5% and while it's not necessarily the results I wanted, it was the results we got and it's far better than a trip to the hospital.

So while this seems like a long, drawn out recap on the Trials and Tribulations of mine and Kidd's 2016 year, the past 2.5 months of not riding have left me with so much time to reflect and see the mistakes I made along the way.  As a result, I am back to feeling humble and determined to make right.  I will never stop trying to better myself for Kidd as well as now Kai and other horses that will cross my path in the future. 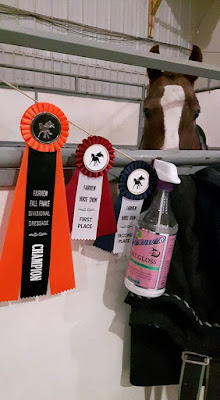 I hope that if someone reading this is currently in the early stages of my 2016 epidemic, they are able to obtain the same outcome I seem to have ended up with.  I hope that you can see the glimmer of hope up ahead, even if it feels like you'll never be able to touch it.  There is hope but regardless you need to be able to take a step back, look at the situation from a clear prospective and most of all, you have to be able to take the blame.  You must be able to drop the 'woe is me' attitude and evaluate how you ended up in the pickle you're in and how to fix it.  You may need to take a break. You may need to do the opposite and ride more.  You may need to swallow something unappealing like accepting that your $23432809.99 saddle doesn't make your horse happy or, heaven forbid, you may need to work on yourself.. and at the end of the day, learn from my mistakes.  Leave your negative emotions at the in-gate.  I'm no quitter but there has been days where I swallowed my pride, lowered my expectations dramatically, and dismounted far before I truly wanted to for the sake of not escalating things further.  At the end of the day, I am not a professional rider. I do not have unlimited funds, and I am human.  I make mistakes. I react out of emotion and often regret it.  And that's okay.