Working in a Winter Wonderland

Two posts in one day, someone get this girl a trophy!  Ok all jokingness aside, I have a lot of ideas swirling around in my head and rather than annoy my friends with them like usual, I figured I had best just blog it - since that's what this blog is here for - me to track all my annoying thoughts and theories!

So I finally braved the elements, put the office phone on call forwarding to my cell and set out to have mine and Kai's first 'real' session.  I went outside with the goal to introduce my Neck Stretcher to her on the lunge line, and hopefully graduate to ground driving if things go smoothly.  I noticed this morning when I came into the office/house that she was half-ass weaving in her pen due to her 'buddies' being gone out of sight.. I ignored her and went into work.
When I went outside this afternoon she was contently snoozing as her buddies stood nearby munching on hay and such.  I caught her, and took her into the barn.  As we reached the barn door, she planted her feet (not unusual for her at this point) and kept trying to turn back.  By this point she was parallel with the barn door so I walked outside to turn her in a small circle and try again. I realized her buddies were taking off galloping out to their field, so she continually pranced, tossed her head and just generally acted like a goofball who felt left out.  With a little coaxing thru pressure & release, I got her into the barn but not without a massive leap due to her blanket sliding on the edge of the door.  Nevertheless, I walked her into the stall and tied her up while she couldn't contain her anxiety from the situation.  I tied her up, did up the top stall chain and walked away until she relaxed herself.  As she shook, pawed and stomped her feet I talked to her softly and rummaged around the barn finding my tack and such.  By then she had relaxed and I removed her blankets and brushed her down after I removed the bandage from her fetlock (see previous post).  Upon removing the poultice I thoroughly inspected her wound and opted to leave it unwrapped for the evening.  It looks worse in that photo than it is, it's entirely hard like scar tissue *tear*.

I tacked her up without any excitement other than her reluctance to bridle up.  I chalked it up to putting a cold bit in her mouth the last two times and her not forgiving me despite buckets of apologies and cookies, remained patient and carried on outside to my snowy arena.
It's a little breezy today which made the temperature about -11C, but luckily the wind was coming from the East and my arena is quite sheltered on that side so it made it quite comfortable.... Or at least as comfortable as it can be this time of year.  I sent her out on the lunge line to the left first (her more comfortable way) and after a few circles of establishing where she should be, she decided it was time to start playing.  She had a minor slip once while trotting due to her own ignorance, and we carried on.  Shortly after, I halted her and put my Neck Stretcher on her nearly as loose as it could go.  I attached it to the D rings, just simply to give her a slight feel on her mouth besides the lunge line.  Typically I prefer to see them attached to the girth on either side, or in some cases between the front legs, but knowing Kai and her love to leap and buck, I felt that the D rings were the safest choice for her right now.  Before I carry on, I also wanted to mention why I chose the Neck Stretcher in the hopes that this will clarify things for perhaps a younger or less experienced rider..

I'll start by saying, I am really not one for gimmicks.  I occasionally use the Neck Stretcher on Kidd while lunging, primarily when he's out of shape and prefers to go around like a hollow camel, and I use it over other products because I love the give in it.  If you aren't familiar with a Neck Stretcher (I believe Greenhawk advertises them as Neck Flexors), it's literally just a giant bungee cord that runs from on top of the poll, through the bit loops and attaches to where ever you feel necessary.  It's not meant to be used tightly (like any training aids for that matter), and the beauty in it is the amount of give that it has.  That being said, for a horse who loves to lean and pull I probably wouldn't recommend it unless you're experienced in setting it appropriately to deter that, and the horse is smart enough to understand that the excessive pressure isn't ideal.
I chose to use the Neck Stretcher on Kai for a few different reasons.  For starters, it provides steady pressure and gives faster than a human hand can in the theory of Pressure and Release (IE when she releases even the slightest bit, I release the pressure so she learns to seek that reward), and I think her bucking and leaping antics can be at least minimized, if not cleared fully, if something were to make that less comfortable for her.  Today, my theory proved correct because she had about 5 hissy fits when she decided to buck and leap and felt the pressure of the Neck Stretcher.  On the 6th time, she decided to buck, leap and just be a First Class Idiot for about 3 laps while I calmly said "easy, whoa, relax, etc" before she finally biffed it and slipped.  Call me a bad horse mom, but I did not feel the least bit bad for her.  Of course, I immediately reeled in my lunge line and went up to her to check her and my saddle for any damage or injuries while she caught her breath and looked at me as if to say 'HOLY SHIT DID YOU SEE THAT, THE GROUND FELL RIGHT OUT FROM UNDERNEATH ME", which was surprising because I honestly expected her to totally turn her nose up at me in blame.  After thoroughly checking her over, I sent her back out on the circle and she was much more keen to just quietly walk.  It was at this point that I clipped the other end up to the opposite bit ring, and decided to ground drive her. 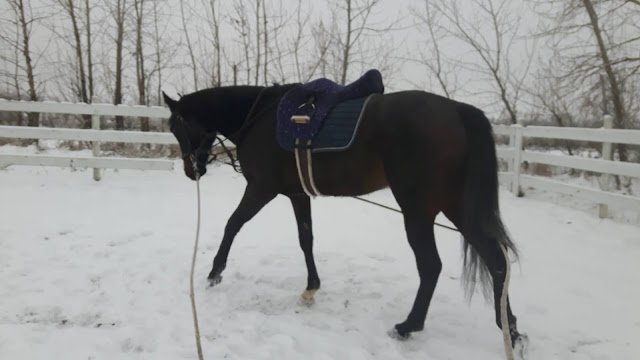 We started on a circle similar to lunging, and once I knew she was comfortable with that we graduated to smaller circles, larger circles, figure 8's, halting, walking on, and so on.  There is so much that can be done at a walk at this stage in our process that I don't feel pressured to ask her to add speed, as I have no doubt we will face speed-wobble after speed-wobble if we tried.  I'm a fan of perfecting things in walk before moving on, especially when they're such basic things like stopping and steering.  Much to my surprise, she drove better than she lunged.  She was excellent.. which was a relief because for the 45 minutes prior I was questioning my sanity.  I drove her for about 10 minutes before ending things on a great note and I took her back to the barn where she once again planted her feet but walked in much easier this time.

I'm finding little habits, like planting her feet when she doesn't want to go through a doorway or gate that I feel are a combination of things.  She doesn't look angry when she does it.  She looks confused, unfocused and like she's saying "i'm 3 and my favorite word is no!".  Acting weird in gates or small areas is normal for OTTB's, as is her attitude, so I have no doubt things will improve with consistency.  This will be a long road, but I have no doubt the rewards will be worth it.  I'm going to continue with the ground work for a few more days before I drag my out of shape butt up onto her back for the first time. I want to make it clear that this bucking and leaping is not acceptable and while I think it's ignorant to say "oh she wont buck/leap/bolt/whatever" for even the most brokest of horses, I do like to think that it is slightly less likely to happen if I do some more homework first.

As we get to know each other more, it's becoming more apparent that Kai has been allowed to get away with things that I wouldn't personally consider acceptable.  Before I continue, let me start off by saying there is absolutely nothing wrong with this, and I have no doubt in my mind she came from a wonderful home.  If I have learned anything living on a Race Horse farm, it's that they are often allowed to get away with things that *I PERSONALLY* wouldn't allow my own horses to, and that is 100% just a matter of opinion.  As well, there is an underlying theory that that extra badassery and attitude gives them an edge they need to be a good, successful race horse.  I'm not discrediting that one bit, i'm simply saying that things that Kai was once allowed to do are no longer being accepted.  This is very new for her and I have to remain patient and understanding.  I cannot lose my top, because she truly doesn't know any better.  The bucking, the leaping, the rubbing when removing a bridle, the protectiveness of her hind end, the jumpiness, etc will all be minimized with confidence, growth in our relationship and further training.  The early stages can always be tough when you get to know a horse, and in some ways I think it's harder to take a horse that's already 'green broke' and advance it than one that isn't broke at all, but it's always better to take things slow, fill in every single hole, answer every single question (provided you are attentive enough to hear them ask), and build a relationship built on trust and understanding.

You'd sooner catch me naked in the grocery store than running around with some over priced piece of plastic that a big name main stream professional trainer told me I *need*, nor will you catch me playing games and obtaining certificates to tell me my horse likes me, but a relationship built on trust and understanding is easily achieved by making things black and white, offering plenty of reward, and trying to keep things fun and enjoyable for all.  This is something I think nearly every horse person can improve on in some way or another, and I am quick to react but Kai is continually reminding me that patients is key.