Last night I decided I was going to be brave and take Kai into the local indoor today.  I was initially thinking I would haul her in on Saturday (tomorrow) morning as it was more likely to be quiet, but once I found out today is actually a stat holiday (yay), I figured I might as well just go for it!

I got up at 8AM (ew, that should almost be illegal on a holiday) so she had a chance to eat her breakfast.  The indoor closes at noon during the week so I decided I was better off to get an early start to avoid feeling rushed.  I threw Kai her hay and headed back inside for a coffee while she ate.  It was a good time to dwell on some plans for our first 'real' session, and run some key theories to keep in the back of my mind (such as reminding myself this is all very 'new' to her).  Once I was mentally prepared I set off on my adventure for the morning. 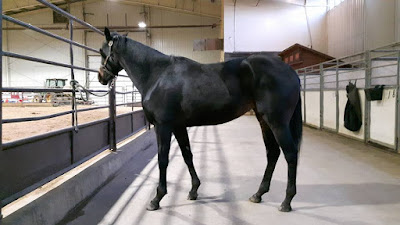 Kai was eager to get caught - even stepped over her Hay to come and say hello.  Weirdly, but not overly surprising, upon reaching the ramp of the trailer she stopped.  She did take some coaxing to get onto the trailer (I'd say a maximum of 2 minutes), but in hindsight this was her first time being loaded alone (when I picked her up the shipper was standing behind her) and lets be honest - she's been on a LOT of trailers in the past few days and she's not even fully settled at home yet.  I brushed it off, hopped in the truck and went on my way.

We made it to the arena and she was wide-eyed and snorty about her new, foreign surroundings.  She unloaded like a bit of an asshole but I brushed it off and carried on towards the indoor.  The first scary thing we encountered was the horse eating electronic overhead horse-sized door and the foyer full of blankets, bins and garbage bags.  Once making it through there, we had to squeeze between horses and absolutely terrifying wheel barrows, shovels, and brooms.  We made it past that, overtop of a strung out hose and tied up at a safe distance away from the in gate, horses and barn staff busy cleaning stalls.  I left supervised her for a short period as she was quite uncertain about where she was and the other horses in the arena riding past her.  While I will say I am a total worry-wart; I'm constantly streaming ideas of what *could* happen and I allow that to hold me back from progression.... it's something I'm working on and I feel like Kai will help me improve it. 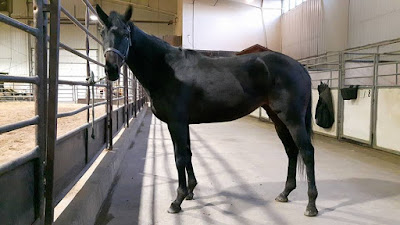 I got to the point where I knew I needed to give my little girl a pat on the bum and send her off to school for the first time, so I walked away, took a break and prepared myself for a broken halter and loose wild child of a mare... I heard the scuffle of feet on the cement and braced myself.... but nothing followed.  All in all, she continued to surprise me with how hard she tried to be a good girl.  She was still a little unsettled so I decided to take her into the arena and lunge her a bit now that the 2 horses being ridden had exited.  Between days on a trailer and then being stuck in a muddy pen, she was really excited to see dry sand...... really excited. She literally booked for about 3 minutes straight on the lunge line.. Once we got through that though, we started to learn more about each other and had some fun doing it. 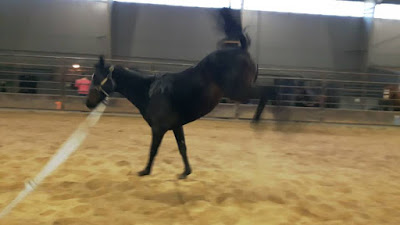 By then she was the only horse left in the facility so I turned her loose for a roll and a gallop if she so chose.  I made the decision NOT to chase her or encourage her to run. She's had to run all her life so far, and I don't think she needs to be forced to anymore.  Instead, I wanted her to have the option to learn that the arena is a safe, fun place.  She trotted and cantered up one wall then meandered around sniffin' shit and doing horsey things.  I stood by the gate and she came up to me when she was ready to leave.  I caught her, tied her back up, brushed her down, and gave her some treats.  She was still pretty antsy and didn't want to stand still, and I wasn't content with paying $22 for Drop In for what we had just done, so I figured that the hell - I packed in a saddle, lets see how she is to tack up.

I started with the saddle pad, she turned her head to smell it once it was on her back (this seems to be her thing, she does it with blankets too and no doubt she will do it with a rider on her back as well), then progressed to the saddle and eventually the girth.  I girthed it up slow, just to gauge her reaction and there was little to none.  I wasn't totally confident in leaving with her bouncing butt on the lunge line and she clearly wasn't very tired so we went back into the arena again.  This time she lunged with very little issues or excitement. In fact, I actually had to stop and grab a lunge line because I couldn't even keep her trotting.  I kept it short and upon cooling out lunged her all the way around the arena which kind of had us back at square one, but we ended on a good and relaxing note.  She was really scared of the far end of the arena, which is full of more horse-eating stuff (jumps, barrels, cones, tarps, tractor, roping boxes, etc) but we got through it and upon walking back to the gate had already established that when my feet stop moving, so do yours. 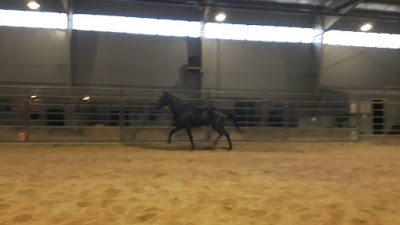 Someone recently told me that she won't get on a horse if it needs to be held at the mounting block, because that indicates the horse isn't ready to be ridden yet - there is more homework to do.. and that really sunk into me and made a lot of sense.  So on that note, we finished up with finding comfort by the mounting block.  She blew me away with her comfort level. I rubbed her all over, patted the saddle and her bum, leaned across her back and other than get bored toward the end she didn't move a muscle.  I honestly felt like I could have climbed on her without problems.. but I wasn't prepared to get on (no proper riding attire) and I wanted to leave things on a good note. 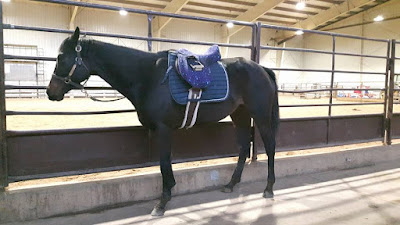 One thing that is becoming obviously apparent and will be addressed but not solved in 1 day, is that she is absolutely fine with coming over top of people with her shoulders - which, in my experience, isn't unusual for a lot of horses, especially race horses.  It will take time and consistency but i'm sure we will over come it.  She seems to be a quick learner and she wants to be a good girl, she just seems to be really torn between thinking logically and thinking reactively, but I have no doubt she will come around. 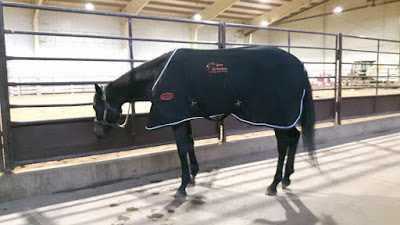 I've been quite curious about her height so while I was at the arena I pulled out the measuring stick to put all the guessing to rest.  She was advertised as 16HH and was clearly a bit bum high still.  While I was slightly worried I'd end up with a monster on my hands, she seemed much smaller in person.  To be honest, I was a little relieved but once I brought her into our barn yesterday I second guessed my thoughts of her being so small as she seemed much bigger now that we were out of the mud.  I decided enough was enough, and I needed to know how tall she was.  She's barefoot, and measured 15.3 3/4 on the dot, so I am certain with shoes on she was 16HH when she was last measured.

Over all, I was thrilled with her and our first field trip despite taking even longer to load on the way home but with a gentle encouragement from my lead rope and we were on our way.  By the end she was totally content being tied to the rail even with other horses riding in the arena - she even allowed herself to almost fall asleep a few times with one hind leg cocked in relaxation.

It's very apparent how one-sided she is, which isn't unusual for a race horse.  Tracking to the right she needs a larger circle and moves much flatter (especially in the Canter), and her leads were all over the map, from cross firing, to being wrong completely.  Her circles are squiggly and inconsistent to the right, and just keeping steady rhythm for 1 circle is a struggle.... but with time and consistency, it will come.

I'm also really happy that my Jump Saddle seems to fit her, she was super to tack up and next time I will bridle her and see how that goes.. I didn't even bring a bridle into the arena today but I don't think any of Kidd's will fit her - his jump bridle is already on the last hole on everything and she hasn't earned the right to wear any of my Dressage gear yet... might have to go shopping soon!